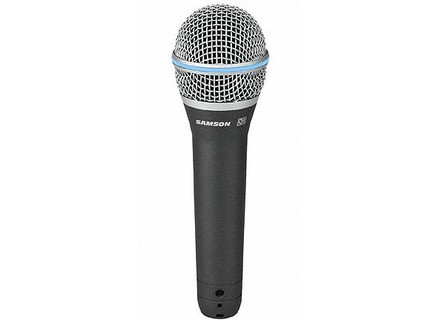 Samson Technologies Q8
4
The Samson Q8 is an upgrade form the Q7. It is a supercardioid dynamic microphone that will keep all of your feedback issues away. It does cost a little more than the Q7 but I still think its under-priced. The Q8 will give you warm crystal clear vocals for your live set or performance. I do think this microphone sounds better on a female’s voice though, females have softer and lighter toned voices. A males voice is deeper and more harsh, and the Q8 just does not respond the same to a males voice as it does to a females. This is where I would say that the Q7 was better because it sounded great on both female and male voices and tones.

On a male voice, the lower tones and frequencies are a bit harsh for some reason. I am not sure why because the Q8 and Q7 have virtually the same exact specs. The Q8 handles feedback better than the Q7, but the Q7 hands male vocals/voices better. So it could be considered a tossup between the two microphones but if you ask me I still say that the Q7 is better than the Q8.

The Q8 has an impedance of 300 ohms and has a frequency range of 60Hz-16kHz. It does come with a microphone clip and a carry case. The Q8 is a solid microphone for a female’s voice, but if you are a male and want a good affordable stage microphone get the Q7. The Q7 will give you a better sound, and it will save you about 50 bucks in the process. If you want the Q8 because it has a better frequency range then go for it, but from my personal experience the Q7 is better. But the value for both of the microphones is great considering the money they cost. They are both affordable but the Q8 just is not as good as the previous Q7.

Samson Technologies Q8
2
This mic is basically a Shure SM58 clone, so it should be cheaper than an SM58. But for some reason it's not! Samson usually has amazing value for their very cheap products. This mic has all very similar features to the SM58. It even looks very similar. It is a pretty rugged and heavy mic, so this will do just fine on stage even if it gets knocked over. There is a heavy grill on it with a built in pop filter. It's a dynamic mic with a cardioid pickup which is very well suited to for live vocals. There's a lot of side and back rejection which helps get more clarity in the vocals and helps it to cut through the band instruments. You have to connect this mic with XLR. This mic has a weirdly high output, which is a nice feature when you're playing live and you tend to have some long cable runs. That fact will help it resist any electrical noise. The capsule inside seems to be shock-mounted to help reduce any noise you get from holding it instead of leaving it on the stand.

I used this a couple times when I was out gigging. The venue I played at had a few of these in lieu of SM58's. Honestly, I am very surprised at Samson about this mic. It sounds worse than the SM58, it is not as detailed and present. Yet it isn't about 1/3 of the price as most Samson clone products are. The mic really isn't that good sounding, and for the money you are definitely better off just getting a Shure SM58. There are also a bunch of mics made by Sennheiser that serve the same purpose for about the same or less money. Not a great value, I wouldn't get it.

nicobatteur's review (This content has been automatically translated from French)

I use the microphone and then a few days.
There is no feedback and the voice is as crystal retutuée Cairo.
This mic is great for éalement resume guitar amplifiers.
I find that it is widely and is even better That a Shure SM58 from home.
I bought expensive NULOOP € 69, which is a price vraimet trs resonance, a purchase again !!!!!