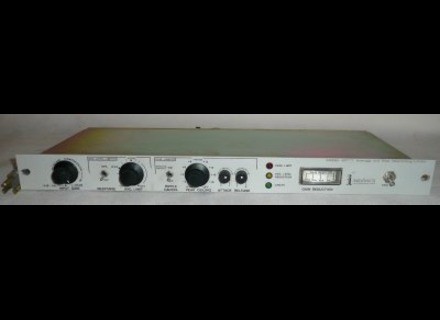 Inovonics 201
5
This is a vintage compressor/limiter. It has standard XLR connections. I don't know of many people who've used this compressor except for one guy I worked with at his studio, and he swears by it. I heard the results and I must say it is quite excellent. It is an analog solid state compressor. It cannot be edited through a Mac or PC. It is rackable like most of these types of units are, and it takes one rack space.

I haven't used a manual for this piece of gear so I don't know how informative it is. I do know that this is one piece of gear that took me a little bit to figure out. It has controls for input gain, average limit, peak ceiling, attack and release. There is also a switch that goes from average limit to peak ceiling, which gives you a few more options.

I really think this thing sounds great. I would say in general, even though it says compressor/limiter, it really should only be used as a limiter as the parameters aren't really set up for regular compression. However, I would say that this is a fantastic piece of gear overall. It's great at flattening out individual tracks or entire mixes. It works great on vocals as well as guitars, harmonicas, and plenty of other things. However, if I'm working on something that isn't going to be mastered, I think that this is a great option for limiting it instead. That's definitely the best use i've found for it at least.

While this isn't the best limiter I've used, I do like it a lot. I haven't encountered many pieces of gear with these types of controls, at least the names are new to me, but I quickly got used to it. I think that this is a pretty expensive piece of gear, and as such, I would probably only get it if I was a studio owner. My colleauge who showed it to me owns his own studio and he benefits from it greatly, but I couldn't use it at home because my system isn't good enough. So make sure your other equipment is good enough to handle all of this. All in all this is a great piece of gear.
Did you find this review helpful?yesno
»

Inovonics 201
5
The Inovonics 201 is a vintage compressor/limiter that is for use in the recording studio. I don't know exactly when this is from, as I really don't know much background information on it at all. I recently got to see of these in action in a studio where I was doing a freelance session at. I'd never seen one of these before and was definitely excited to hear it before we starting using it. It's an analog piece of equipment and will take up a single space in a traditional rack case.

The make up of the Inovonics 201 isn't too hard to follow, but I wouldn't say it's the simplest compressor/limiter that I've used. Since it's an older piece of gear, the labeling on the parameters isn't the standards that we're used to today, but there still the same parameters that experienced users will be used to. These parameters are for input gain, limit, peaking ceiling, and for attack and release. It also has switches for 'ripple cancel' and 'response,' which in all honesty I'm not sure what these do as we didn't need to use them and I didn't inquire. A manual might be a good idea if you just bought one of these, but if you come across it on the stop you should be able to figure out how to use it without the assistance of a manual.

The sound of the Inovonics 201 definitely makes it a unique compressor when compared with many of the models out today. It seems to hit the signal pretty hard, of course in varying degrees depending on how you set the parameters, but in general it's a pretty heavy sounding compressor/limiter. Not sure that it would be suitable as an all purpose compressor, as it has it's own sound that should be utilized in situations where it might fit in best. This thing is awesome on drums if you're going for a certain type of sound, but as I said, I wouldn't use it all over the place.

The Inovonics 201 is a really cool looking and sounding compressor/limiter, but it's definitely got it's own color and isn't the most transparent sounding dynamics processor out there. Chances are you're not going to find many of these out there, but if you're interested in acquiring one there seems to be one for sale every now and again. In the end, while this wouldn't be the best choice for a lot of situations, it's got a cool sound that's all it's own...
Did you find this review helpful?yesno
»