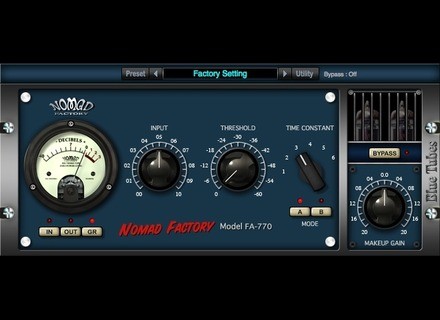 Nomad Factory BT FA-770
4
The Nomad Factory BT (Blues Tubes) FA-770 is a compression plug-in that comes with the Nomad Factory Blue Tubes Dynamics Pack of plug-ins. The plug-in is modeled after the classic Fairchild 670 compressor, as it shares pretty much the same configuration of that you’ll find on a Fairchild. The studio that I work at has all of the Nomad Factory plug-ins pretty much, including all of the Blues Tubes packs. This bundle in particular comes with a bunch of other cool plug-ins as well, and is more than affordable. Even if you don’t know anything about the make up of a Fairchild compressor, this is still very easy to use. It’s got main parameters for input level, threshold, and time constant, which is essentially a release parameters. It also has two different modes for this parameter and also gives you a make up gain leveling and a programmable VU meter with three different modes. It’s not going to get too much easier than this one…

We’ve got the Nomad Factory BT FA-770 running on a few systems at the professional recording studio complex I work at, all of which are Pro Tools HD based. I’ve never had any problems at all running any amount of plug-ins on these systems, and this one definitely seems to be pretty light on taking up processing power anyway…

While the Nomad Factory BT FA-770 doesn’t really sound like a Fairchild at all, it’s still a nice little plug-in to use for a variety of purposes. It’s simple make up makes it easy to use pretty much across the board in terms of different applications, but I’d say I like using it best for acoustic and electric guitars. I’m not sure that I like this Fairchild style plug-in better than those made by Waves or Bomb Factory, but it’s definitely got a different sort of sound than those, as I find it to be thicker sounding with a less brittle attack. The full Blues Tubes Dynamics Pack is one home studio owners should be aware of as you get a ton of plug-ins like this one at a very cheap price. So while this will never be the first compression plug-in I use, it’s always a nice option to have in the suite.
Did you find this review helpful?yesno
»