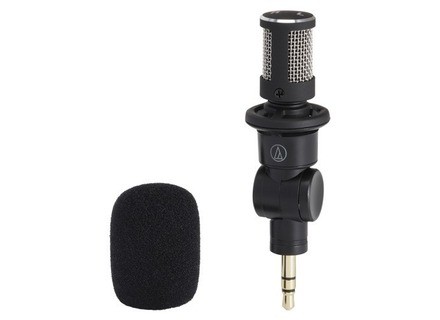 AT9911, Electret Microphone from Audio-Technica.

Audio-Technica AT9911
3
This is a stereo electret condenser microphone powered by the tilt protocol Power Plug In Power. Usage: Conferences, vocal music, but maybe not sure. This

If I had chosen the Sony PCM-M10, was because it fits easily in your pocket. Imagine there is something to save. I unsheathed, I turn, I press REC, I set the recording level, I position and go for the sound. And most enduring of its kind - up to 43 hours on two AA batteries, the foot, it was unheard of! But then, disappointment mics of the latter are of good quality, certainly, but the stereo is almost nonexistent - no stereo relief, to the point that this recorder could not "enter" as it is in my applications, including myself hunter who respects her as much as possible the nature sounds - and thus also that respects as much as possible the terrain stereo.

Well, of course, I have an Audio-Technica AT825. It is old, this microphone, but it is indestructible. And it is much more efficient. But this is not the same thing. This mic is long, cumbersome and all, with the cable and adapters, does really in the pocket, and it kills the spontaneity of the sound and appearance "chopping" cited above. It was then that I found for this Sony micro capsule - like Nagra NM-MICSII but it only works on the Nagra Ares IBD or ML and I have not found anything equivalent unfortunately Plug In Power. It took me so I fell back on the microphone "T" and the models are scarce: it took me a gallery on the internet before finding the Audio-Technica.

Audio-Technica is the only brand to have really serious built such a microphone (mid-December 2010): I so dark. Especially since it is cheap: So what did I lose? I had to make the recovery of my Sony PCM-M10, sure.

Well, when we look closely at the packaging of this mini-Audio-Technica, we see he was not destined for export, it was intended only for Japanese domestic market. Besides, I had to import it on my own.

My goal is almost reached. It folds into a small plastic cone with PCM-M10, both of them in the pocket. When I record something, I released the recorder and microphone of the small horn, I plug the microphone, I oriented, I set the recording level, and I'm starting positions. And there, the stereo is better, everything is clean, but the microphone breath, make it approximately 58 to 62 dB SNR, no more. In addition, it sounds very acute. Well, I expected that it can not capture the bass - so tiny with membranes, it was mission impossible, given the wavelengths of low frequency sound, but I never expected not that it sounds as sharp as that. It will compensate in post-production.

For now, I lack the experience to know if I managed to redirect my PCM-M10 through the microphone (at first glance, anyway I'm a little skeptical). Because if I can not win, it will change my handheld recorder and there, the only serious hope is the Nagra Ares capsule microphone with ML4 Nagra NM-MICSII. Well, it's at least double the price options included, is not on 24-bit 96 kHz, its internal memory is not expandable because no integrated card reader but it takes 10 hours on 2 AA batteries and if the microphone cartridge holds up, it is after all the essentials. And besides, with Nagra, there is no risk of mistaking far.

It's a shame because this converter Sony PCM-M10 are excellent though.

Well, there is also in the same kind of Audio-Technica AT9910 that I could try for just a little more expensive but the specifications do not move much.
Did you find this review helpful?yesno
»