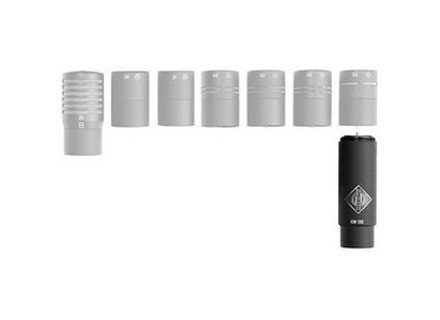 Neumann KM 100
5
This is not an electret microphone, as it is categorized on this website. It is in fact a small diaphragm condenser mic designed by Neumann. It is a small, tiny microphone that is great for picking up faint sounds and ambiance. I only have experience using them in the studio as I've never taken them out to a live gig, but I know full well that they can be used not only for concerts but for field recordings, theater, etc. Therefore they are an incredibly versatile microphone as they can be used in all types of recordings, whether for music or foley effects or sound design. Part of the reason for this versatility rests with the seven different capsules that can be placed over the mic, thereby changing the tone of the mic considerably.

I really like using these microphones as a room mic, particularly when recording a drum kit. I have found that the space and air that these mics pick up is one of their most salient features. I have tried using them as overhead mics but I found that they didn't do the kit justice compared to some of my other go-to small diaphragm condensers. I think that in general they are better used from a distance. I have heard recordings that used them for theater (placed in the rear of the theater). I have also seen them used in recording orchestral performances, which I was also extremely impressed with. These are a pretty expensive microphone (about 1,500 apiece, 3,000 for the stereo pair). I highly recommend using them in a stereo pair, as I have honestly only used them in that capacity. They are a great way for an engineer to capture ambiance and give a feeling of space to their recordings.