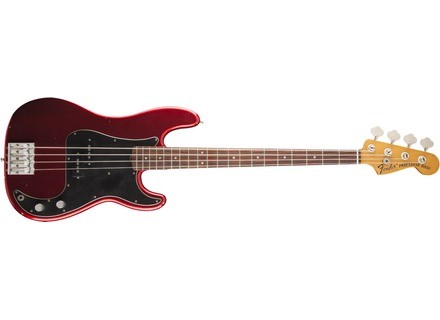 Will_i_am's review (This content has been automatically translated from French)" No complaints!"

In short, a great mix of vintage and modern.
I put 9 for the relic finish, I did not find it quite exaggerated. The bass should have been either brand new or frankly reliquée as the original Mendel, but then it really like Fender did not dare go frankly the "relicage". After it is also a matter of taste.

The handle is a real massacre, the strong point of this bass. It so big that handle standard P-Bass and more pleasant to the touch with lacquer finish. For me the best round among all bass I've owned.
Ergonomics is uh ... normal I will say is what a bass precision.
Access to acute is better than average, as 90% low, but eventually apart for soloists it did not matter too much ...
It is a precision bass, so therefore business and it sounds immediately.

I do not think this bass is a model of versatility with its powerful micro, but it must go almost anywhere even when using a minimal work on the amp EQ. Actually this is rather typical rock bass, the sound is quite round and fat, while placing very well in the mix.
A treat fingers and a big killing in pick. I mounted mine mesh dishes D'Addario, it tempers some of the enthusiasm and it growls SPB3 well as it should.

I've had 3 months, it is one of the best bass I've owned. Not very versatile, but extremely effective. Basically it has a sound, but what sound!
The value for money is very good, given the equipment and finish.

Surely one of the best of the Fender precision bass range currently.

Fender Nate Mendel P Bass
5
Country of Manufacture: Mexico, because Juan is as good as John.
It is a Precision: 20 frets, one volume, one tone ... Efficiency in simplicity, and no compromise!
But the beautiful is also provided with a Badass bridge 2, micro Seymour Duncan SPB-3 and a pretty special mache which reproduces a pretty special mache, built in '71 under the CBS era. A little late, and that's good for small hands (which is not my case, but it is still less tiring!) In short, the bass is a replica of the main bass Mendel, including nitrocellulose lacquer and Road Worn finish.
These two points merit attention: the bass is supplied with a paper explaining the Custom Shop features of nitrocellulose lacquer, and that's always good to know

However, the Road Worn finish is pretty average, between used and new ...
In short, the finish is off the note 9, the rest being impressive for the price!

The handle is described above. Nitro lacquer on it, it slips, it's good!
Not too thick a handle Precision therefore less tiring but ... A Precision though eh!

Ergonomics is very good, it does not sting. However, I do not will note on access to acute because a bass is not really made for that. But if this is correct huh!
You just make sure to have a good strap by weight (low forces) and to ensure that the strap does not come off all the time (useful for strap locks it).
The sound? Precision, Plug & Play Baby!

I'm pretty broad in musical styles and I need a versatile bass but without the fuss trimmings level. Precision is my love since I was in music, and never its prédécesseuses have disappointed me.
There, it's party time! I plug in my Hartke (HA3500), EQ flat tone background and I realize that this is the kind of girl who likes to be into him!

Pick, it growls, it's amazing, really sound Mendel (for rare songs where you can hear!)
Fingers, I lower the tone and enter the land of funk, Motown & Co.
For jazz, it is a little "muscular" but we can get out honorably. And the slap is very much alive. When I say life is that all frequencies emerge, so it is a bit aggressive sometimes ... Gentlemen, your compressors

1 week, 2 concerts and I think I'll love it!
In fact, for the record, Nate Mendel is the first name that I held in the history of bass and it is thanks to him that I wanted to play the bass you can imagine my reaction when I learned the model output signature! But I stayed demanding and I was not disappointed: it's a nice bass, very versatile despite the micro Seymour and always this feeling of indestructibility (very useful for people as sensitive as me ^ ^)!
In short, a successful Fender ... If you are lucky enough to find one, throw a really ear and your hands, it's worth it. Despite its minor flaws, 900 euros, it's me

10
For me, a real little love bass