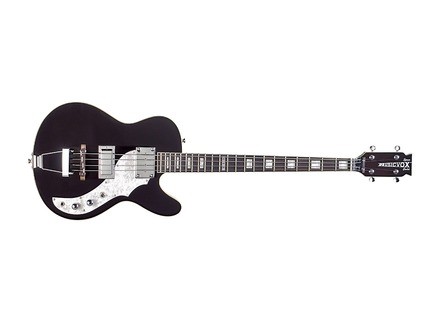 mk is watoo's review (This content has been automatically translated from French)" I am a fan!"

This is a low shortscale (USB = Ultimate Shortscale bass, nothing to do with computer cables!), Light, well balanced, easy & quick to play.
Both microphones are its complementary: one near the handle has a very powerful, the deepest of the bridge. The sound that comes out is clearly evolving as we play near one or the other. This effect is more pronounced than in other basses that I've experienced. This allows a lot of variants.
Two knobs, one for the tone, and the other for the volume.
A 3-position switch allows you to select the microphone (or two at a time).

It is easily possible (by hand) to adjust the action and therefore also the amount of any such rope.


Note that initially existed Space Cadet model 34 ", and has been developed with Woody Allen, no, not the filmmaker dyslexic, but the bassist Alma Brothers.

Given its relatively small size, this bass is easily accessible to guitarists like bassists.
It is a pleasure to play, the sound is right there, and you can enjoy easily to change, self by touching the buttons, attacking the strings closer to one or the other.
This makes it ideal for a game mediator, but it works very well as a game for the finger. Microphones make it easy to lay the thumb in this case.

Absolutely awesome, everything in this low reminds the heyday of the mid / late 60's!
Form, as a crazy cousin meets Fender Les Paul. The binding white (the white line of color that runs along the neck, body ...), the fonts used, the shape of the head (a little remote, as the Hofner bass), the bridge ...
And when the branch, time machine is on the way!
I had two basses: a Jazz Bass 1969, 4001 & a Rickenbaker 1977.
The JB is perfect for a round and powerful, both late & racy. BOOM.
The Ricky has a harder, more piercing, excellent dynamics.

I needed a low light, with a different sound, more "thump" a powerful attack and little sustain. Found in this part of the Ricken, but the sound is not so 60s.

Complementarity microphones makes it possible to choose between a very hollow sound, without safe, almost like a guitar, or a more powerful round.

Ampeg B15 amp is perfect, but it gets very interesting sounds on other amps. You can also experiment on a guitar amp, it sounds!

I've had 48 hours & I played it like crazy.
It has a sound that really inspires me, this side Swinging London gives ideas & ergonomics helps to implement.

Now I'm addicted to the brand, I want the Space Ranger (a model look insane, we see in the film Austin Powers Goldmember

at its hottest & powerful, the Space Cadet or 12 strings (guitar ).

Note that the guitar costs $ 900 on the site musicvox, but the boss of this little box also sells on ebay, at a lower price!
It is only the distance selling. It goes without problem in customs.