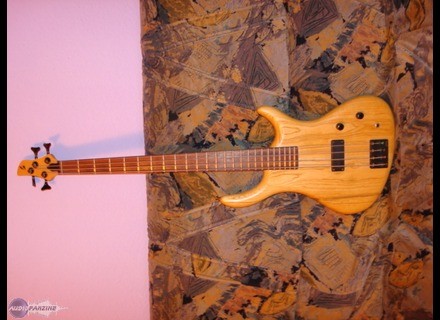 All user reviews for the Schack Classique Unique 4

thegoofisonfire's review (This content has been automatically translated from French)

The first thing that jars with the coffee belt is its weight, it weighs nothing !!!!!!!!!!!!!!!
access to the tweeter is easy! Ergonomics is impeccable!
balance webbing is perfect, it only stands head and not moving!
the sound is warm and clear, very simple to set a tone just because
but what is most striking is the touch. The action is very low and the bass does not frieze, very easy to play, ttrés fast. Scarcely had the finger is placed on the hoop as it sounds! Certainly an effect of the zero fret!
the latter provides incredible accuracy and precision of note, not without a saddle reminds aluminum! without its drawbacks!
can clarify the sound with the push-pull but the output level down a lot!
no secret is a bass luthier, and you plug it sounds!!

I play a rock that merges
even if the output level is not high because passive, we find that it sounds strong and finger tapping!
Where she works wonders with it disto (SD2 boss guitar )!!!! the sound is clear but keeps the serious, no drooling!
the push-pull switches to single coil on the microphone and with a little slapper + clarity!!
this bass is simple mad: wood, microphone cords, all thoroughly and it sounds without needing fiddled the knobs pdt 3am! it is connected to a head trace elliot cabinet and a modified original allumabass 1 * 15 "+ 1 * 5"!
it hums, it snaps, it sings!
no complaints about the beautiful!!

I've had it 3 years but I bought second hand ds a cash converters, was among the bargain of the century because I pay € 450
I just found fault with the level of output lower than my other 2 basses are active! So in the end nothing serious !!!!!
I tried low and had a lot of models, with a + or e - complex (tm stevens funk machine, warwick corvette $ $ 4, Ibanez Ergodyne, yamaha fretless rbx270 etc ...) and I must say that too much control her, kills her!
is connected, it sounds tt on, no problem!!