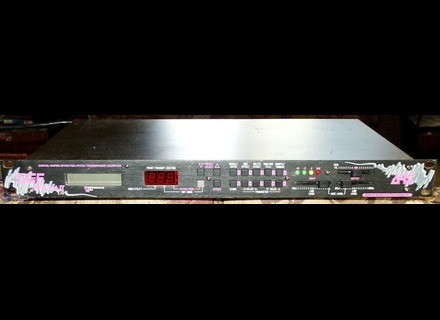 phil77's review (This content has been automatically translated from French)

Art SGE MACH II
2
Many effects, distos, compression, exciter, eq, expander for the "pramp" and most of the classic modulation effects, delay, pitch, reverb. no phaser effects numriques for the part. according to anecdotal sampler, water has flowed under the bridge since 1990 ... Supported by sound diver for shipping, no OEM version provided, no sound diver's era.
MODEL 1U, input-output Stereo, Stereo processing of the signal bypassing the section pramp, controllable by noon.
C'tait the top its release, but the EMS was quickly overtaken by the competition does.

As for distortion, it was much better since, but it is possible to find happiness in the legalization trafficker, the grain even when dpart is rather artificial, but not inintressant. The delays and reverbs are good, the chorus turns a little oddly, we hear the LFO to leave a little abruptly each cycle. The pitch shifter is fair enough for a machine of that era, with a small delay while tracking the same. Plutt pens for guitarists, the EMS is in better use of the same effects as for its multi pramp.

Bought new for the tidy sum of 7000 francs in about 91, I used a rack primarily for delay and reverb. The programming lacks finesse, there is not much available values ​​for the settings, such as the eq is a choice of -12, -6, -3, 0, 3, 6, 12 db which does not really paramtrage prcis trs. When even a little better for the effects of numrique section, but still a bit lightweight, even for the era.
The quality-price report could be correct at the beginners of the 90s, since the first Multi EMS silent as to give a time, with an excellent level of quality in terms of sound for Most of the effects, overall Russian. Today we almost forget its obsolescence if the quality of manufacturing was the height t of the benefits of the machine: Casing in tle of only 1mm thick, fragile faders, detent year economic, lack of power switch gnrale. The worst miscalculated both its food, with too much tension in the secondary leve, o overheating permanent finally melt the layers of cables, with the final obligation to juggle Service to try to catch up with the default design, APRS adresss several letters ART in the United States, still remains without rponse ... Too bad because this machine was worth when the same time.
Too bad for users who have t have enough of these problems, and damage to ART, which has lost clients prfrant to the head in the sand ... EMS is still operating today my noise but produces mass pouvantable still a surprise ... ART thank you!

Other Art multi-Effects for Electric Guitar