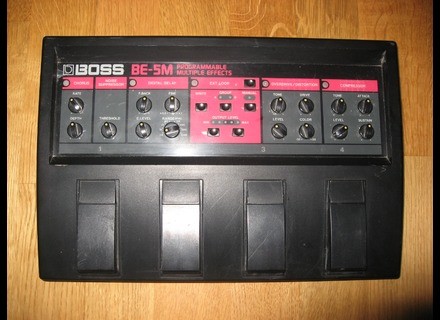 BE-5M Programmable Multiple Effects, Multi-Effects for Electric Guitar from Boss in the BE series.

TheBiloute's review (This content has been automatically translated from French)

It can not be simpler, the effects are useful, not surpeflus ..
it is far from modern digital multi who do everything but are all evil!

not need the manual settings are the same as effects pedals Boss
(Normal right?)
to record a write config is pressing .. point bar

The effects are quality Boss Japan! (The pedalboard was made in Japan)
So we find the same thing on separate pedals (CS2/OS2/CE2/DD2)

And that's good news! I was supposed to simulate an ME50 Boss pedals ... : D
it has nothing to do! Here was REALLY pedals and analog grain (saturation / chorus)

I had this pedal in the late 80's .. I was looking for a for a while
(After unsuccessfully toured all that is done by modeling
I had several multi Digitech / Boss / Yamaha, the Pod, the Vamp, the Tonelab (SE and desktop), etc. ..

it feels good to return to the simple, obvious and especially that really sounds!

Obviously, this is not meant to play nu metal or anything ultra saturated
But for all that is pop / rock / hardcore / heavy 70's / 80's / 90's it's still very versatile
Finally and most importantly ... there were 5 Boss pedals (and good: CC2, DD2 ...) for less
that the price of one secondhand!

Much better for me than a PU or UE300 yet much more sought after ...