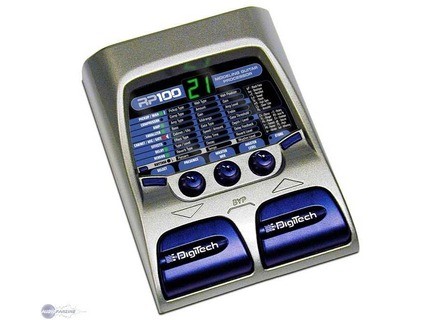 RP100A, Multi-Effects for Electric Guitar from DigiTech in the RP series.

DigiTech RP100A
5
Purchased from Musician's Friend on sale for $79. I originally ordered an RP100 but got sent the RP100A instead. I am on a budget and wanted something with amp modeling and multiple effects. I wanted something that I could use to play electric guitar through a PA amp since I am also a vocalist and did not want to buy two separate amps.

I like that I can plug this into a PA amp and makes it sound like a real guitar amp. I like to play a variety of styles of music and can always find a combination of effects and amp modeling to suite whatever I play. It is also very handy to play through headphones without the amp. You have to spend a lot of time customizing your presets to get the sound you want but I have been very happy with the final result. I have been able to get some nice accoustic, bluesy, jazzy, and mildly distorted rock sounds out of this thing.The best part about this multi-effects unit is its great value for the price. I liked the RP100 over the RP50 because it comes with the power supply ($20 if purchased separately)

The factory and artist presets are not usable unless they are customized and saved as a user preset. As seems to be common with other processors, it is difficult to get the same level of sound out of each amp. I think it is a shame that most of the artist presets are from heavy metal musicians, though this processor has much more versatility than this. Seems like bad marketing to me, since a lot of the heavy metal people seem to complain that they can't get good quality heavy distortion out of this thing.

A very versatile processor for a great price. Great for the beginning musician or musician on a budget who wants to experiment with different sounds or who want to be able to play a variety of music styles without needing to buy separate effects and several different amps.

DigiTech RP100A
4
I bought this multi effects pedal for $100 at guitar center, because I was looking for something broad that covered lots of different sounds.

I like that you can make many many different sounds from it. The customization features are also pretty deep and the amp modes are cool too.

It's hard to mimic a specific sound that you've heard, especially for noobs. Not all sounds are of the best quality.

The base is metal and very sturdy, as are the knobs. But, the pedals themselves are plastic, and feel a little shoddy.

I would recomend this to beginners, or people who want a really broad variety of different sounds.

DigiTech RP100A
5
I bought the RP100A from Guitar Center, where a friend of mine happened to be working. I was looking at a cheaper model (I think it was an RP80) and he suggested I spend a little more and get the RP100A. The cheaper model didn't have the same sturdy contruction, and had fewer presets. I paid $99 before taxes.

I like everything about this unit. I started playing guitar twenty years ago, teaching myself along the way. But I could never afford the good FX pedals.
The RP100A is sick, twisted, and ridiculous with how many different sounds you can get out of it. I've had it for a week, and I still feel like I've barely touched the outer edges of what I can do with it. Let me try to sum up the best things.


The different amp emulators are convincing, and run the gamut of a Marshall stack or an old Fender Tweed. There's even an "acoustic" amp. No matter what preset you are using, the default setting of the parameter knobs allow you to change the amp type, gain, and master volume on the fly. Its like having a line of amps to choose from, in front of you.
The cabinet emulators give you an even wider selection of sound. You can spend a good ten minutes just deciding what type of amp/cabinet combo you want to try out. If the box only included that, it would be worth it for me to play through my tiny 30w Crate amp. But there's more:
A built in electronic tuner, a noise gate (actually, several to choose from), a pick-up emulator, a killer delay unit and a wide variety of reverbs. Did I mention it has a compressor? Oh, and the chorus is warm and tasty.
But what I really, really, really love is the built in drum machine. It has a wide choice of 40 different patterns that loop, and you can set the tempo. I never realized how bad my rhythm was until I played to this machine.

I read some criticism that this unit doesn't have a good "distortion" box in it. Its not meant to be a fuzz or overdrive box. But with the right settings and tweaking, you can get the sound of a Marshall amp, or a Mesa Boogie. What more do you want?

Okay, let's be picky and try to find something wrong with it.

12 of the effects on the box can only be used one at a time. The important effects (like compressor, delay, gate) can all be engaged and set at the same time, whereas these other effects cannot. They are effects that you probably wouldn't want to run at the same time, like chorus, flanger, phaser, rotating speaker, etc. However, I'm an effects hound. I'd love to try to combine some of these.

The "artist" presets have a lot of sounds that are similiar. It probably reflects the incredibly poor variety of sound in the music of today, than the range of sounds you can get from the unit. The factory presets are varied and pretty cool.

The only way to start and stop the drum machine is to press a (small) button on the unit. If you have it running, the drum unit starts when you come back from the tuner setting. I'd love to have a trigger outside of the box that would start the pattern when I want it to start.

It is a sturdy metal box and comes with its own power supply.

I tested the "clean" sounds, and there is no extra noise. With the noise gate engaged, I actually get less noise than I ever had before.

This was worth waiting 20 years for technology to deliver what I was looking for.

Tonight, I played the beginning of "And the Cradle Will Rock" on my Gibson Custom, and it sounded like the guitar on the CD. Granted, the... uh... playing wasn't quite there, but the sound quality did rock. Moreover, I'm discovering the joy of playing new sounds, which is making me practice more.

I've always admired Digitech, but this box is awesome. I can't recommend it enough. If anything, if I had to buy it again, I might put in the extra $50 for the one with the expression pedal built it.

DigiTech RP100A
2
I purchased this unit from Musician's Friend for $99. I'm trying to build a small home recording studio and I don't have a guitar amp. I wanted an all-inclusive guitar effects unit that would take the place of an amp. The product's decription would lead you to believe it would everything you'd ever need...

The RP100A is easy to use. The owner's manual is well written and everything is clearly labeled.

The sound quality of the RP100A is less than desirable and certainly doesn't live up to it's billing. There are tons of effects available on the unit, but, honestly, none of them (except maybe the reverb) sounded very good. The distortion sounds decayed very nastily and it was very hard to get a balanced sound on the clean settings. To put it simply, it sounds more like a kid's toy than the high-end amps its trying to emulate. If you like drowning your guitar tone in an ocean of effects, this might work for you. But when I tried to tone down some of the effects, the resultant tone was rather crappy.

The unit did seem well-constructed. But I returned it to Musician's Friend (with no hassels, I might add) only a couple weeks after getting it.

This is not a unit for a serious musician. A 12 year old kid trying to wow his classmates might can use it. I can't. I think I'm just going to try to buy an amp...