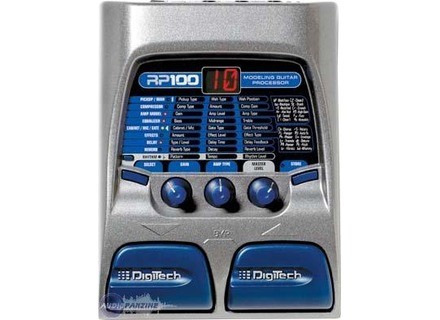 RP100, Multi-Effects for Electric Guitar from DigiTech in the RP series.

DigiTech RP100
4
Considering this unit has a little built in drum machine, for the low price (available used for $20-$50), its a great value. Nothing like playing along to drum tracks to improve your playing and improvisation. As a multi effects unit, it has alot of effects (some good, some not), alot of distortions and sounds (some good, some not), and the ability to save 40 of your own tailored sounds (this is great). I personally didn't like most presets in the unit (and almost gave it away), but you can create some genuinely nice sounding sounds w/effects as your personal presets. The noise gate works great (nice for noisy high gain amps). In short, it's easy to write this unit off as kinda crappy if you don't spend some time with it. There are some very nice sounds lurking within if you have a little patience and get to know the unit. Then add a little drum machine, noise gate, and tuner......and it becomes a steal at say $30 or $50 bucks used these days. Plenty worth picking one up for that low investment. Metal chassis too, built rugged.
Did you find this review helpful?yesno
»

DigiTech RP100
2
This was a gift given my by my dad for my birthday a little over a year ago. He paid $160 Canadian for it. It was bought at a store in Fort Frances Ontario Canada.

The Unit does have a lot of sounds and effects. It's easy to program (although it takes a long time) and generally easy to use. It would be an alright pedal for beginners doing their first recordings. It really is a beginner's tool. But for those people who don't have a lot of money, or nice equipment, it basically does the trick for practice or studio.

I would NEVER use this pedal live. I've played a lot of shows since i got it, and i've never taken it to any of them. there is absolutely NO volume synchronization between effects. the distortions are way to loud compared to the soft sounds. If you ever have to switch between soft to distortion in a song, PRAY that you have a nice volume pedal.

It's also not very sturdy. 2 of the nobs have broken off, and all of a sudden, the built in tuner started thinking my C tuning was a G# tuning. i have no idea how that happened. So now i need to borrow my bassists tuner for gigs.

the construction is simple, medal casing around cheap plastic buttons. The casing feels sturdy, but the buttons feel really easy to break (as they are) and like i said earlier, the sound quality is passable.

Bottom line, If you are a beginner, and you do some studio work, and dont have a lot of money, than this is an alright pedal. You will need to spend time reprogramming the settings, and you will end up replacing it eventually, but it's an alright pedal in a pinch. but NEVER use it live unless you have a nice volume pedal that wont change pitch.

DigiTech RP100
3
i got my RP100 for christmas from www.musiciansfriend.com and it costed around $80. I had had my guitar for a while (not a very good one) and i thought it would be fun to get something to make playing guitar more exciting.

It combines many interesting effects into one unit at a reasonable price. A good product for a beginner guitarist. It has a cool drum simulator. Pretty cool different amp types to simulate through the pedal.

The effects don't sound excellent...hard to customize your own effects... causes a jumble of cords... you need to buy your own adaptor plug (batteries don't last very long)... lots of effects sound the same (loud and distorted)

I would say pretty good quality. An individual pedal for each effect would sound better... but it would be much more money and maybe harder to work with. I think that the RP100 would be better if it had more buttons on it, making the process of creating your own effects easier. I just find that the way it's built makes the pedal difficult to work with.

If you want 40 effects, get this. I have found that i think i would rather have like 6 seperate pedals... each with their own effect. I would describe this as "so-so". Not excellent, just okay. I would instead find out which effects you would want to use with your guitar.

DigiTech RP100
5
I bought this unit at Ken Stanton, a local music store in Atlanta, Georgia. I only paid $90 for it. Heard great things about it and that the effects were incredible especially for the money.

The rp-100 has many effects including 9 amp modelings and lots and lots of other effects. These include anything from reverb to music compression. Lets you create your own sound or use 40 of the factory presets. Also includes 40 artist presets. You can also add an effect pedal from digitech or boss. I added my digitech metal master and got incredibe new sounds and variations. Lets you mix up to 11 different effects at once and save them to th rp-100 itself.

The only thing I didn't like was the qality of distortion. It sounds great though if you add a effects pedal. The only problem is you have to pay another $100 or so for the distortion pedal.

The rp-100 is made out of medal so it holds up incredibly well. The only flaw is that it has plastic pedals.

Great effects processor especially for under $100. Lets you do anything you could dream of.

This review was originally published on http://www.musicgearreview.com
Did you find this review helpful?yesno
»
Read the 26 user reviews on the DigiTech RP100 »