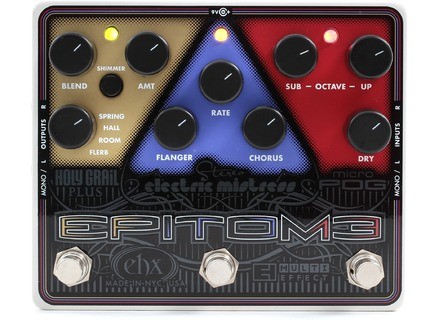 View all offers for Electro-Harmonix Epitome »

Drive8's review (This content has been automatically translated from French)" More comprehensive than it looks ..."

Setup is simple. A little too simple in appearance, as it becomes clear that turning a little buttons, a multitude of different sounds we obtain incredible. One has the impression that it will take months to identify the beast ...

I tulisé pedal on stage and repeat with Stratocaster and Les Paul plugged tube combos and transistors (just to see if all combinations work).
The Micro POG allows for sounds an octave above + an octave below with a rendering of "synth sounds" or church organ types. Nice even if not easy to use on stage, except perhaps to replace three / four synth notes of a song. In any case, no latency: this is cool.
The chorus flanger sounds / very many thanks to knob "Rate" that can focus on either flanger or chorus on and measure the effect with the knob that corresponds either to mix the two up a very metallic sound up to the hyper-space if the two effects are pushed to background.
Reverbs are stunning and Blend / AMT buttons to adjust the effect very precisely. The surprise comes from the fact qu'EHX has added a switch "Shimmer" which allows (among other things) to transform the Holy Grail + in + delay when combining Shimmer Flerb. Again, the delay sound is top notch.

In conclusion, a good multi-effect that sounds very natural (unlike the pedals I've tried (Boss GT, Zoom, ...).
I love: the reverb, delay, flanger the / chorus sounds. For that alone, it was worth the blow by replacing several pedals.
I do not like: the sounds of POG, the switches activating effects too close (it is better not to put on the 45 or we may operate in both), it lacks a master volume knob, and especially not integrated memory (shame because on stage, not fun to turn the knobs between songs)
He took his place in my pedalboard.

See all 33 photos of Electro-Harmonix Epitome »

View all 4 videos of Electro-Harmonix Epitome »

Electro-Harmonix Epitome manuals and other files

Other Electro-Harmonix multi-Effects for Electric Guitar