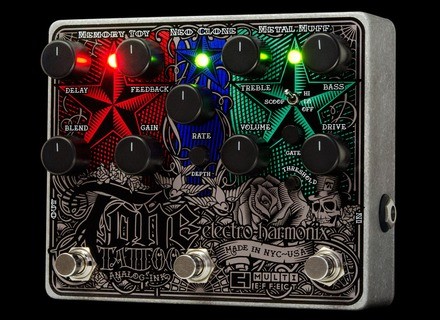 ricoute's review (This content has been automatically translated from French)"the return of the analog that kills! ......."

So as to have the same case as the equivalent of the individual blades if mentioned above € 100 less.

No editing, it is in the anolog pure, plug and play!!


Not seen the type of rack pedal floor

Connections in and out so no loop but not so important in terms of sound hither results.

A good transformer supplied with 200mah, nice when some brands like Dunlop price of their individual pedals! .....

config, it is in the config of a single box with the same settings as you would on separate pedals with LEDs indicating exactly where it is!

Clear manual, but in English (English and Spanish on the website) I thought it was mandatory!)

You turn the knobs and judge, no editing precisely
The foot switches are firm enough, usual in EH

CHORUS: 2 settings: Rate and deeph
no problem it sounds good

Overall steps riquiquis effects, contrary to what was feared

Sounds good analog, with good clarity and transparency with some characteristic heat EH

There is no sound that I hate, in any case it is very homogeneous taken separately or together, although logic would rather that we put either chorus or delay with the muff.

this is 10 days but qq hours of practice anyway!

Finally, before I say .... a Pod HD500 that I sold (bcp spent time parameter rather than playing and having mostly a gas plant difficult to manage, and the disastrous results sound mostly connected to a tube amp ( but here it is common knowledge!) and after bcp setbacks and disappointments modeling num &#39;(I wanted something usable and analog ESPECIALLY!

Plus:
- Well above the critical and complementary effects to any particular numerical modeling
- The very original look "industrial" style and quality construction

THE least:
- Perhaps the size (bigger than my comp Empress, I hope that it will not take offense!) 140 * 115 * 50 sometimes difficult to fit into a "small" pedal-board well
that this is not his first but still very possible use!

- Small scales around the buttons to take its cues were not superfluous!

I would have loved a flanger or reverb so a set of 4 see effects have been top 5, but I nitpick ... because it does not exist in the analog config, at the same time it just be in individual pedal ... not too expensive.

I made a small reference to the Epitome, with whom I hesitated (Reverb, Flanger / Chorus and Octaver) but more universal effects and the price made me lean towards the tattoo

R / Q / P very good to excellent, I do not see what could blame him in this kind of config in terms of quality.
The models chosen pedals Eh are sound (sometimes more upscale models are sometimes not ... most successful!)

My goal was initially from on high quality individual pedals (diamond & Empress, I still succumbed to the call of the latter with the compressor that beautifully complements the TTEH

It is true that there is nothing to lose, certainly not on YouTube to get an idea and I made the short list of pedals TOP.
But after there is always an element of chance to see how it sounds so good as it is the fact, ESPECIALLY when it is inserted into the full mesh amp / cab and scratches, there is a great amount of uncertainty DESPITE the must of pedals, and after a certain price .... between 400 & 550 € per pedal me cool enough so discouraged!

And that&#39;s where I found quite by accident the first EPITOME (but Octaver function did not interest me too much and lack of delay made me lead me to almost ideal TONE Tattoo, a little simple formula purely analog I wanted, without knowing that it really existed

So I do not expect a miracle of a modest craft based (how wrong I was!), But this is a very happy and surprised .... qualitatively (though I&#39;m basically demanding).

I will not be too ... advise against all bastringues num &#39;(Pod, tone lab, zoom G, bosses and heads kinds of digital effects&#39; affecting too much sustain harmonic and dynamic reports which heads the sound amp model with the same grain ( was played more / or less equalization that is) even if they progress as and when time (witness my passage to the ToneLab pod)

I&#39;ll come back when I have more recoil, but already I have absolutely no desire to make it (as I did with many stuff that have disappointed me), and yet it plays its role perfectly a small amp to transistos Marathon (much better than any amp model types to Vox VT +) and will pass on my amp lamp!

Published on 07/13/12
As expected, Electro-Harmonix unveiled its new pedals: the Tone Tatoo and the Talking Pedal.

Other Electro-Harmonix multi-Effects for Electric Guitar