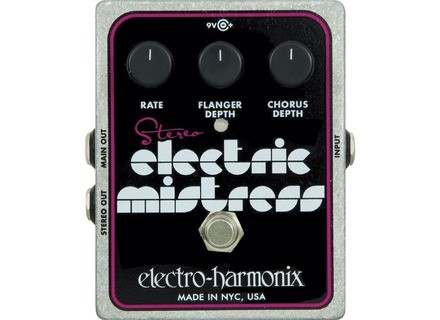 Stereo Electric Mistress, Flanger for Guitar from Electro-Harmonix in the Mistress series.

the pedal is true to its brand:
There are finally some settings, but the use of three knobs gives varied or extreme results.
Basically it was like setting:
> First knob that in the first half of the race to adjust the frequency range of zero flanger speed. The second half of the race is used to adjust the speed, so a fixed effect we pass a turning effect.
> A second rule depth flanger
> The third the depth of the chorus

There is no adjustment mix. As against the pedal is true bypass

Like any pedal "big buttons", or we have a good visual memory is there is a beast with his positions knob think. However, it is more forgiving than other approximations.

The case is "bullet proof".

This is where it gets good!
The grain of the two proposed effects is excellent. Both very credible to attack the front 70's rock, sadly the modern things (chorus to Toto), or uses and frankly extreme metal.
Provided a consistent chaining (in my case, in the effects loop before an analog delay), the grain will always nice, clear as saturated.

The icing on the cake is the ability to have single flanger (chorus depth to zero), one chorus (flanger depth zero), or a combination of both effects. This mix "drop anchor" a clear, but is also very interesting when it comes to finding a particular texture to a crunch or distorted.

used for nearly six months, four taped to my pedalboard, I'm delighted.
also its quality and sound signature, it allows, offering both quality effects, gain a significant place, while calling for a little sonic exploration (yes until then I had no more thought to mix it both effects ...)
In his versions of pedals, electro-harmonix sometimes produces bizarre, but here for once, it is a gem!

T perfect score would have some presets, but it's much demand on a small MODEL like this.

It rgler 3 buttons, plutt easy, and you can vary the pleasures.
I just do not understand too the race level flanger that changes "function" before twelve o'clock noon and APRS, but good.

So I am the scotch. I trusted that I Electro-Harmonix pedals numrique possde another (the rverb Cathedral) s and I'm not.
To explain my purchase, I was looking for an effective "anchor" a little sound on some songs clean. I had a Boss CE-5 chorus did the job, but the fact of a lightweight pair and lightweight flanger chorus really gives this that I love with the Mistress.
I expected a chorus "average" since it is a two pedals in one and not at all: the sound is much prettier than I got up by my pedals Boss CE- 5 with all its buttons rglages. If you want to sound a little vintage type Police, has done well trs.
So I am delighted to have two effects pedals in one (a You Save space and money for less utiliss effects).
For this purpose "wet lightweight, the flanger is 9am, 10am chorus and spleen noon.
APRS well sr, we can DLIR just by pushing knobs beyond noon, the effects are obtained type "machine" with the flanger, "detune" the chorus, or "noise water" with both.
I encourage you check out the video on youtube dmo.

I use it for a few weeks and I am absolutely delighted. It forcment a more secondary reverb, delay or distortion, but it's really more of a clean sound. As a 2 pedals in one, I make room on board the PDAL.
Purchase a really smart, excellent quality price.

afrohair2004's review (This content has been automatically translated from French)

Electro-Harmonix Stereo Electric Mistress
5
Unlike analog Deluxe Electric Mistress, the Stereo Electric Mistress pedal is a digital format smaller, even if it is wider than a boss for example. Metal case, looks solid.
2 effects are available: Flanger (like her big sister) and chorus.
Depth (depth) of the 2 effects is adjustable via 2 faders. A third volume pot used to adjust the "rate" (frequency) of the flanger. The frequency of the chorus is by default a very small offset to the flanger. No memory settings "at random", the former as an analog pedal. Only one indicator (flashing yellow to red) indicates the "rate" flanger.
An instrument input, 2 outputs (requires stereo) jacks.
A 9-volt power supply type boss provided in the box.

A good demo is better than any words:
https://proguitarshop.com/store/flanger-pedals-c-110/electro-harmonix-stereo-electric-mistress-p-296
You'll understand: this pedal produces sounds rather vintage, superb quality, with a typical grain electro-harmonix, which I love. Entire depth range is usable, even if pushed forward, it gets really weird sounds. The ability to color the chorus flanger creates a turning point and softens the result. The filter matrix is ​​more remarkable: it "freezes" the flanger on a particular sound frequency, to produce sounds really amazing: your guitar starts to sound like a harpsichord from outer space!

I hesitated between several effects, my wish is to color certain passages in songs where it was needed. Phaser? Flanger? Chorus? This pedal gives me 2 effects in one, with outstanding sound quality (warmth, inimitable grain), a broad palette of sounds and a more reasonable size that the model "deluxe".
I just hope that this beautiful object will withstand the test of time!

Other Electro-Harmonix flangers for Guitar