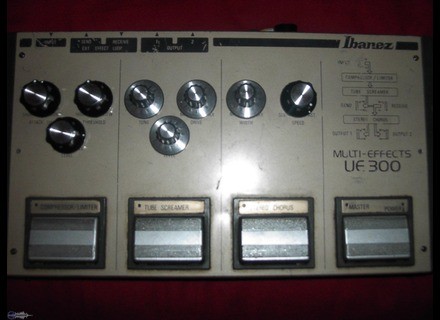 UE-300, Multi-Effects for Electric Guitar from Ibanez in the UE series.

All user reviews for the Ibanez UE-300

Average Score:4.6( 4.6/5 based on 6 reviews )
Value For Money : Excellent
Not satisfied with those reviews?
Our members also liked:

Jumikael's review (This content has been automatically translated from French)" A very pleasant surprise!"

Good effects are very good. I am completely in love:
Nickel is already the overdrive, normal is a classic, and I, who refused to believe that TS sounded better than most other overdrive ... In short, it is to have an effect, and it costs nothing.
The compressor and chorus are pretty good too. Few controls for the chorus but it sounds. I already had a Cosmichorus Dr. Scientist, above the level of opportunities certainly, but hey, if you want a classic chorus, this one will do well.
The compressor, good well, sometimes it's useful, and it has a real musicality.

I really appreciate being able to cut all the effects with the master, including effects loop. A real plus

I got it for 60 euros. I think even for a little more it's worth it. When we think of each pedal crank taken separately is worth more than that ...
In fact, this is the best multi-effect I had (and I had the 3 / 4 of the pod, the digitech, zoom). At the same time it is not comparable but ... If you fantasize about multiple digital, think this one will be cheaper and you will keep longer.

fuzzstone's review (This content has been automatically translated from French)" Is in the old pots ....."

Ibanez UE-300
5
Well, as discussed below, 3 effects pedal indestructible legendary among Ibanez. compressor, overdrive and chorus. Either the CP9, the TS9 and CS9, just this ...
all in a metal box made to withstand a nuclear attack.
Little more than a footswitch Master General commissioning and integrated effects loop between the TS9 and CS9.
is obviously not "plug-in" on a PC, no midi output is not digital or a lamp, it's just good old analog effects.
Quality workmanship, I would say perfect, because such a life without a hitch, the new digital multi foo loupiote magic should take a leaf ....

The config is very simple, you turn the knyobs and the sound changes, you support the corresponding footswitch has the effect and the effect is on, you support the master, the effects are office, you rappuis above, the effects stop.
The manual is brief but clear.
As for editing sounds, well .. nothing t'édite seen this thing before the date of POD and other ToneLab.

Effects are great for that as I was born in the 60's, is refractory to multiple digital effect processor has dual effects and futuristic technology emulating 15,000 amps and less impact, and sound research Typed old school.
I find it ideal for rich sound from a small amp lamp, a practice he gives a second channel to my Fender or my valve junior champion.
used recess with my guitars, sounds Searched (blues rock, hard 70's) are easily obtained, and for good reason .... the effects come directly from that time ... or not far ...

I use this one for 1 month, but I play on this model for 10 years in the 80's, sold connement (we all make crap) in the mid 90s, I just redeem a AFien (thank you!) and that is happiness ...
since I had sold, I used a car effects and multi effects also never found the simplicity and quality of the immediate case.
of course, there's better, fuller, more "distortion", more versatile, more everything .... but no, not as strong and faithful that the EU 300.
This bracket should be included in the pantheon of effects between the Vox Wha ... and the Big Muff for others j'm'en cares, I use them ... or more.

In overall opinion I put 10. but for me only because it has certainly not appropriate for everyone, but who want a little sound of the golden 70's finally good price, the UE300 is unavoidable. Indeed the price of the reissue of the TS9 (130 € approximately) € 150/250 put in this thing seem almost cheap ... look at the price of a TS9 or CS9 original to see ...

stefane50300's review (This content has been automatically translated from French)

Ibanez UE-300
5
Everything has already been said previously by my colleagues Zikos.

It is well worth much cranksets on the market (especially with prices of crap 'cause there is a lamp inside) if you want a simple and powerful (comp and slight distortion and chorus incredible sustain on the lamp) that the character, just analog transistors there 30 years ago.

Associated with a head of winston 1974 (200watts Echolette all lamps of course, if you do not know c normal, I prepared a note on this amp is absolutely stunning (when it is hot!)) And a cabinet ampeg SVT410HE I find the sound of TubeScreamer perfect fan of grunge, rock, seventies or even metal to the highest level (dsl <span class="reviewAuthor">mgoussu ( ../../../../membres/a.play,u.10784.html ) but you were wrong <img class="smiley" src="/images/audiofanzine/interface/smileys/icon_wink.gif" alt="" /></span> ) This pedal (the first of her generation I think) is admirable.

Try it in stereo chorus and you'll know what I mean, the sound envelops you for not becoming one with you. Ideal for the scene, but the nightmare of sound engineers, if they do not know their job hehe <img class="smiley" src="/images/audiofanzine/interface/smileys/icon_wink.gif" alt="" /> .

AH yes, I forgot, I am a bassist. Brothers, go eyes closed and open wallet.

mgoussu's review (This content has been automatically translated from French)

Ibanez UE-300
5
3 effects:
Compressor, tube screamer, chorus.
Analog only.
Editable? Three effects, three knobs for the compressor: attack time, compression threshold, level.
For the tube screamer, 3 knobs: gain, Tone Volume, the chorus, the depth and speed.
It is a pdalier: Each has an effect pedals, said pedals plus a master, to bypass all in one kick (not rackmount)
Connections: between a jack, an output because the chorus is stro stro, plus a loop to add an effect.
The power supply is internal, just plug in the sector.

The config is simple, has both 3 pedals in one, it really is a multi effects compared to current gas plants? Editing is simple, too, are explored by turning knobs and sailing. So we can save sounds by writing the values ​​of the knobs on paper! C roots, but not aimed at fans with full effect.
I have no manual. No need.

It took me a while before we know rgler the compressor. I did not understand what was served. Once we understand the basics of compression, it s'avre simple, effective.

The chorus is beautiful trs. It's impressive, period. And I have not had the opportunity to taste in Stereo! I tried it in stereo, it's really beautiful.

The tube screamer. It may be garish ts (as the name suggests) is I often Tone ("tone") at its lowest. But it really brings a dynamic saturation, which n'crase not sound. That's rock, mtal, abstain. EDIT: I tried with other guitars, in fact it is a good tube screamer. With humbuckers, the sound is obtained crucnh trs enjoyable.

Wholesale rather than multi effects I would say that it is a perfect pedals to find two or three sounds (with a clear chorus, saturated with a screamer and a compress for casseroles). And a ring. Trs's good analogue, with a nice size.

The more I play it the more I like.

I have nearly a decade, bought used. I love the chorus, and the ability to bypass or not the three pedals at once.
I like the tube screamer least, although it is also a question of era as when I bought it I did not use strictly as a! [edit, i love again, like what]
Quality report huge price because I bought a mouth of bread (it just DCON I had to change a power jack).

I bought a ue400, history of having the phaser is going well and you can change the order of effects.

kik@infomaniak.ch's review (This content has been automatically translated from French)

Ibanez UE-300
4
Already mentioned above, but important: the device has an external effects loop between the tube screamer and the chorus. Which is not bad to insert a delay, a volume pedal, etc ... So as to review the previous article on the order of effects! It may very well attack the chorus before the compressor / saturation, although it don not any interest in truth.

Three pedals in series there's no simple ... bypass with a general (also acts on the outer loop).

Compressor: no complaints! tube screamer: good but lacks a bit of saturation (I assume that the compressor was placed upstream to add the missed dose during the solos ...). Can be improved by changing the drive 500k pot with a 1M, which I did successfully! Chorus: a little "too much" for my taste in mono, for against, makes all its splendor in stereo! There is still a bit much but I always preferred the Ibanez Boss chorus.

the least: the sound of the chorus (a BBD delay instead would have been much better!)

In short, if you can find secondhand around the € 100 (price at which I had), do not hesitate to buy it! Otherwise, a config with three separate effects Ibanez themselves or others may be a better option for those that require little effect.
Did you find this review helpful?yesno

roman66's review (This content has been automatically translated from French)

Simple configuration, the compressor offers new possibilities to the tube scraemer and chorus.
No need for manual, simply turn the knobs patiently, trying to find her.
I do not have tons of effects on my guitar, I prefer the natural, or even connect directly to the amp a good character and play with the pots. Ideal for me, so.
Used with a wah wah (cry baby, it's with Conference!)

What I like most is that this pedal does not alter the sound of the amp. I tried it on a Fender Deluxe, another weird hybrid (combo Roland GA60 head and Fender cabinets, and a Carlsbro lead. There are sound with no problem. The bypass is nickel.
For a vintage well, this is ideal, it makes fishing impossible, in short, a good old trick as it no longer made.

I use it for about a month.
What I love is the analogue of the beast, it really changes lives. Another thing, this thing is apparently indestructible, mine has a couple of decades, lots of live, the entire carcass is rotten, but it works great. if you want a pedal for life ...
What I like least is the chorus, simply because I am not a fan of chorus, which is nevertheless excellent. I would have preferred a phaser.

I also have a Korg AX1 Toneworks for the distortion, there's no photo. I also have a boss analog chorus, but as I said, me and the chorus ....
And then ... I have been loaned, given me already and we want to buy it (a professional guitarist studio ...), but now, that one, I keep it for me!
Otherwise, agree with the surcotage of this pedal, the price really made me jump.