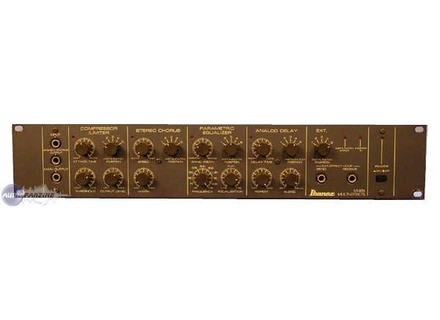 Ibanez UE-405
4
The Ibanez UE-405 is a multi-effects processor in the form of a rack mountable piece of outboard gear. Since I've only used this in a professional studio where it was already racked up and ready for use, I don't know what types of connections it has in the back. It was hooked up to a patch bay, so when I wanted to use it I would just make the connections there. It does however have 1/4" connections in the front for both an input and two outputs. The UE-405 will take up two spaces in a traditional rack casing.

There definitely aren't too many Ibanez UE-405's out there today for whatever reason. While I generally like to get my modulation effects inside the box if I didn't already get them at the source, the UE-405 provides an option both after the fact or during tracking if you so choose. It's great to have a few high quality effects in one spot, as I find myself experimenting with them where I might not normally do so with a plug-in or a single effect processor. I can't say what sort of price the UE-405 would command, but if you can find one at a reasonable price when compared to other multi-effects processors like this one, I'd say the UE-405 is definitely a piece of gear worth considering.

Other Ibanez multi-Effects for Electric Guitar