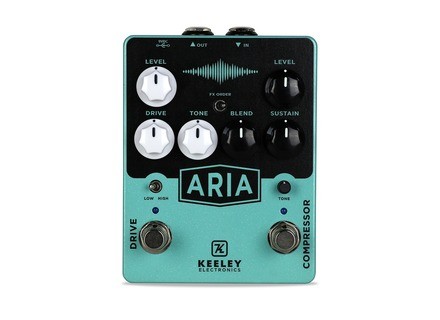 Keeley Electronics Aria Compressor Drive
5
SOUND:
There are two things that comprise the Keeley Aria. First, the Compressor side of the pedal is one of the best available. Keeley Electronics is known for its compressor and I suspect because of the Blend knob that allows a mix of the dry signal (the dynamics) with the compressed (punch), as well as the Tone knob (to accommodate humbuckers vs. single-coils or to use as a treble boost). As a result, you get that fullness of tone without sounding as though the signal is compressed. Certainly you can adjust the Blend so that the signal is more compressed, but what’s impressive with the Keeley compressor is that it doesn’t sound squishy and processed.

The Drive (aka Keeley Red Dirt germanium overdrive) is on the other side of the pedal, which has highly usable and impressive tones. The low-gain setting is clean-ish, but can be raunchy enough for classic and modern rock, which nice sounding grain and thickness. The high-gain setting has more saturation, ideal for Metal (although not over the top like a Diezel amp, for example) and more particularly smooth searing leads. Now, if you combine the Drive with a clean amp, you get what I just described, but with a higher-gain channel the Drive side of the Aria (the low-gain setting being more appropriate) helps push the amp, although it should be dialed back to 9-10 o’clock, whereas the amp’s channel likely should not be more than 12-noon or 1-o’clock. Certainly this will depend on the amp and individual taste. If that wasn’t enough, there is an FX toggle switch that places the Compressor before the Drive, or the Drive before Compressor (and you can use either aspect independently). With the Compressor before Drive there is more push, volume and dynamics. However, if you’re looking for a very smooth and subdued Drive tone, then placing the Drive before the Compressor is ideal.

OVERALL IMPRESSION:
An excellent pedal in general, the Aria is all-purpose and fantastic sounding Drive along with one of the best Compressors in the industry; at $199 (currently on sale at RobertKeeley.com) you cannot go wrong. There are two independent sides that have their own controls, including an individual Level/Volume for both Compressor and Drive. The Compressor has the famous Blend knob, for that perfect compression while allowing for dynamics to shine through (besides a Sustain and tone control), and the Drive has a low-gain/high-gain switch and with a tone control, as well. The ability to use either or both, to have the Compressor before or after the Drive, and how well this pedal works with amps makes the Aria a solid find and pedalboard worthy. As a bonus, the Aria allows you to use stereo TRS cables so that you can place effects between the Compressor and the Drive, e.g., a wah pedal, phaser, flange, other dirt boxes, etc. And the surf-sparkle paint with black artwork certainly makes the pedal pop for a modern, yet classy look.

GENERAL USE:
The Aria has several features. The Compressor is the best I have used so far, and Robert Keeley is well known for this technology and for good reason. The Blend knob allows you to add Compression, yet maintain as much dynamics in your tone as you like. With the Blend turned low (9-o’clock) there is obvious compression, but with some difference in notes played softly or aggressively. Most importantly, harmonics and dynamics shine through. Even at 12-noon compression rounds out the tone very well, but dynamics still pop and you don’t get that flat squishy effect. Turned up full and there is some squishiness, yet it sounds more natural and authentic than what I’ve experienced with other compressors (you don’t get that massive tone suck common in other compressors). The Sustain knob works well, and I tend to like it around 12-noon – that setting does not produce too much background hiss and allows you to play some slow lead lines without the signal dropping quickly. And there’s a Level and Tone knob on the Compressor side for some final tweaking.

There also are Level and Tone controls on the Drive side. The Drive knob produces a modest effect around 9-o’clock and hits a sweet spot around 1-o’clock (presuming you’re running through a clean amp). Beyond 1-o’clock and the tone becomes more saturated, which is fine if that’s what you want, but note definition coupled with maximum gain (while maintaining note definition) seems to be around 1-o’clock. If added to a higher-gain amp channel, then obviously the Drive needs to be tamed if used as a boost. The Drive side also offers two settings – low-gain and high-gain. The low-gain setting produces far more dynamics and headroom, and has an excellent clean-to-rock sound (more appropriate for rhythm, but sounds good with lead as well). The high-gain setting seems to sit best for lead playing, as it has a smoother and more saturated attribute. That quality is even more apparent (regardless of low-gain or high-gain) if you toggle switch the Drive before the Compressor (since the compressor smoothes out the drive); conversely, placing the Compressor before the Drive maintains more of the tone’s original characteristics and push in the mix.

The Aria offers a few different options for hook-up. Typically, you would place the Aria at the front of the pedal chain, as would be expected with a compressor and drive, but you also can use Stereo TSR cables so that you can fit other pedals between the compressor and the drive, such as a wah, distortion, flange/phaser, etc. In a sense, think of it as an effects loop. From there, and at the flip of a toggle, you can decide if you want the Compressor first (more dynamics and headroom) or the Drive first (a smoother, rounder and warmer tone).

OTHER DETAILS:
The Aria is a medium sized pedal, measuring 4 x 3.75 x 1.5 inches (10 x 9.5 x 3.8 cm). It boasts a quality surf sparkle powder coated paint job with black artwork. Both footswitches produce a solid click without any popping during play. There is a small toggle switch and tone knob in front of the footswitches, but both are positioned lower than the footswitches to prevent accidental stepping and damage. The six plastic knobs are of heavy construction and their associated pots turn smoothly and with good quality. The ‘FX Order’ toggle switch is well protected from a stomping foot, sandwiched among the plastic knobs. All inputs are located in the back, to save on pedalboard space and to remain out of harm’s way. The Aria does not work on batteries, but only requires a standard 9VDC 50mA power supply.