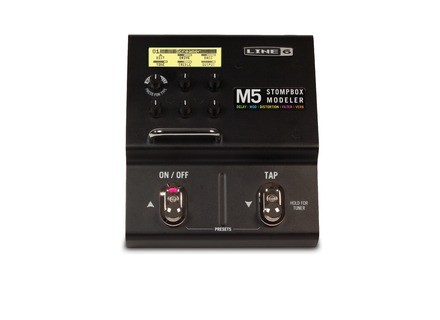 M5, Multi-Effects for Electric Guitar from Line 6 in the Stompboxes Modeler series.

Fairly easy to use

First, the converters are of very poor quality (used to share with my analog synth), lots of bass and lost momentum. Just for that, I will not have it kept.
Deuxio, with some effects a little fun (especially in reverb), it is very little qualitative (eg delay) or really good (phaser, flanger, distortion).

So unless you want dirty sound (and there's still better for it), this stuff is to be avoided.

13 of 35 people found this review helpful

forestgun's review (This content has been automatically translated from French)" Digital, whatever."

Config simple.
Line6 continues to make us salivate with a list of all the prestigious models emulated. We'll see what it is.
I find that the selection of presets is a bit slow and unstable.

Used with U.S. Fender strat, Ibanez RG 670 Ibanez TSA 15H head on with two Celestion speaker.
User POD, I was wondering if Line6 had finally succeeded in laying a multi for the live. Nay ...
All this is made very cold and digital. Compared to my EHX Germanium 4 Big Muff or my Fulltone, the distos are sick.
Some chorus caught my attention, without more, the classic here. Ditto for phaser and flanger.
The times are not too bad. But speaking of strength (as for the dedicated pedal from the same manufacturer) is going a little fast. It is far from a Memory Man.
As for filters, it is used where and when?

Used for a week.
A lot of models tested before.
I needed a tuner, so for € 118, I said it would issue money: rab + tuner pedal. Actually, I rather regret.
Certainly, Line 6 products rather limited registration.

7 of 18 people found this review helpful

Taking all the sounds of the recent updates bet M13/M9, the M5 has over 100 simus pedal that had their glory days (and some specific Line6).
They are always divided into five categories:
Yellow: Drive, comp and EQ
Blue: Modulation
Green: Delay
Violet Filters
Red Reverb

the colors yellow, blue, green and purple are reminiscent of the DM4, MM4, FM4 and DL4. The reverbs are from the Verbzilla.

The principle of the M5 is used only one effect at a time (which really is not a default for use on a pedalboard because I have myself what to drive, modulation, delay , filter, ring mod.), because we all sometimes want to use a particular effect for an intro without the need to buy the pedal to use it 2 times or have a creative tool group because we have everything under their feet, even to save later with the original.

I can not believe the fact that it is stereo and we can put an expression pedal with which to manage any parameter for all effects (including of course the simulation Whammy)
The power supply and it is the big surprise is 9v DC and works with a BBE Supacharger or with PP2 + 300mA (current cable having a double to double the strength of two power outputs), of course, there are also a power supply 'in the box Line6 ...

It is of course to 24 presets of any simulation. access to presets is done by pressing two buttons simultaneously and with the switch is mounted on the left and right with the switch the other way around. to validate the preset and set in motion, we must press again on the 2 switches unless (like me and bcp of users because it is most convenient) we put the M5 in a switch which serves as on / off button and it remains in the preset menu with sounds that load as and (where the utility can then place them in the order you want according to their set list).

So I will not repeat all the pedals on which we can already learn about various topics (DM4, DL4, etc. ...) on AF or g.com but I wanted to tell you about the effects I wanted to have under your feet without taking a second board!
First, the drives: No because it is blah, except for the simulation of driver tube is the only one pleased me (but on a 5W lamp not test group). In any case, you would understand that I have not bought for that.

Then the modulations: while this is especially the simulation of Goatkeerper I love, and a preset of phaser barber (since I also have a polychorus and a ring mod, that's all I use in modulation part for now)

Then the reverbs I wanted to taste the OCTO and the famous shimmer effect and I was not disappointed! I love but suddenly I discovered I was expecting not one, just in the same spirit, the particle verb = giant for groundwater / ambient

Partly delay, I am very happy to find the game sweep echo, and reverse (I prefer that of my former Hazara). Self-volume is also great for the swells. for the rest, I have not redone the preset tape / tube echo, delay or dynamic (I must rediscover)

And finally the filters while there, it is the feast! Growler, obi-wah, wah seek, mu-tron passing for modular synth effects and whammy, there really is something to do and that is very very good.

So far, I did not detect any loss of volume on activation and since I use a switcher, no problem when I do not use it.

The downside for me is to find the right place for the M5, modulation, delay and reverb we tend to put the end of the chain but not the filters. So, we introduced me to a programmable switch 438 MOEN GEC I intend to buy. It has four loops that may have to activate in any direction. This means that for a preset, it can be placed with distos (od + type filter, reverb or delay if you want before od Shoegazer) or after (if you use reverb, delay). It is super convenient and also allows me to put my choice until I polychorus Satus ... or my ring mod after delay etc. ... only drawback is that you can only use three loops at a time and it only has 8 presets.

This switch is on the way of States (ordered on Ebay) and I can not wait to use the M5, to occasionally use the comps and especially the filters before Satus!

Published on 04/06/11
M5 Stompbox Modeler provides one effect at a time and takes up a single space on a pedal board.