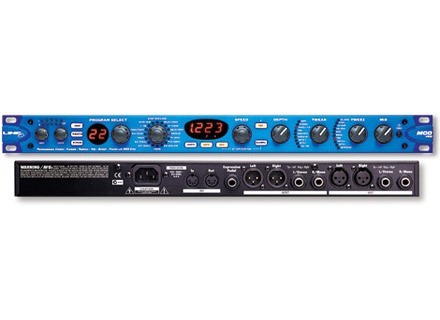 Mod Pro, Multi-Effects for Electric Guitar from Line 6 in the Racks Modeler series.

Line 6 Mod Pro
4
It's the rackmountable version of Line 6's MM4 Mod filter stompbox. It's still the same bright blue, just flat and with four screw holes in the front. These were made primarily for studio use, generally made for guitars, and didn't sell very well when they came out for around $300 a piece. If you're interested in the history, they started when U2's The Edge wanted something to put his presets together instead of having upwards of 15 DM4 stompboxes on stage. So Line 6 built the Echo Pro and the Filter and Mod Pro. I've been playing bass through it for about 7 years now and using it as a do-everything rack-effect.

I wanted phaser/flanger/vibe/chorus/ring mod/etc. etc. for my bass, and I wanted it to be all in one good box. I found this sitting around Pianos 'n' Stuff for about $120 and in perfect condition, so I decided I had to have it, especially since it sounded killer on my bass. It's really rare to find these anymore anywhere. You generally have to check ebay or various forums to get one, but you can find them for $100 - $150.

99 presets. Any kind of filter effect that exists on the market. Great high quality digital modeling (Line 6 doesn't do analog). The pre and post gain knobs are a major help, especially since this is meant as an 'effect loop' box. You can also control it all with a MIDI board/expression pedal, which is awesome.

Using it as a bass effect box, it's not the best for maintaining every ounce of low end, but it DOES help your sound come forward. When I turn it on people in the audience KNOW that I did something, and I think that's just as important. If I'm gonna use effects, they aren't gonna be subtle...I want people to know what I'm doing on bass, whether it's in rock, jazz, or metal or whatever I'm doing. You don't play Cliff Burton's solo before Pulling Teeth with just a hint of distortion...you crank it!

It's pretty nice-lookin in a rack. And there are plenty of blinky lights to make the audience go 'oooh! I bet that thing is awesome and/or expensive' As for the construction, you know what to do. Take care of it, and don't drop it. Otherwise, you're golden.

It's not the best for retaining low end, but the sheer amount of effect processing power and the ability to really get your effects out there and bring your bass forward are simply awesome. Not to mention the fact that it's MIDI/expression controllable.

Put it in your effect loop, not just in your chain.

mako's review (This content has been automatically translated from French)

Very simple, a good manual (very nice!).
No hassle for.
Get started immediately.

The know-how Line6.
The models are perfect and very well explained.
We are dealing with soft-crazy.
The only difference against an analog machine, it is worth more to avoid saturating the input.

I use it for 3 years.
All good.
Difficult to find a machine at this price with such effects, opportunities (Midi, backups, etc. ...), Jack and XLR inputs, an integrated power supply ...
Line 6 Congratulations!