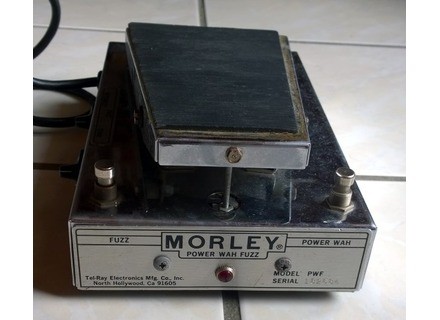 Power Wah Fuzz, Multi-Effects for Electric Guitar from Morley in the Tel-Ray series.

Morley Power Wah Fuzz
4
I've had 2 of these now, 1975 and a 1977. They sounded slightly different from each other but not big enough to keep them both. They are easily modifiable due to how they work so the difference could have been just a slight modification. These are a very cool design and too bad they're not made any more. With the fuzz and wah off it's a volume pedal. With the fuzz on the pedal controls how much fuzz to clean ratio you want. Toe down is full fuzz, toe up is clean. With the wah on it works like a normal wah pedal. Both the fuzz and wah can be used simultaneously.

The pedal works with a "falling curtain" design. Most wah pedals work off of a potentiometer. When you rock the pedal it turns the pot and that controls the sweep. On these when you rock the pedal it moved a black curtain inside the pedal. There's a little light bulb and depending on how much light there is it controls the wah sound you hear. Simple mods are moving the light bulb slightly so there's either more of less light throughout the sweep, either having the pedal work at lower frequencies or higher.

I used this on bass similar to Cliff Burton of MetallicA. While it doesn't nail his tone it is a very unique sound. I've tried many different pedals, including newer morleys, and none of them sound anything like this. With distortion in front of the wah it has the screaming sound when you rock it forward. For a good example listen to MetallicA's "Pulling Teeth", "For Whom The Bell Tolls", and "The Call of Ktulu". Cliff actually used the Power Wah Boost, which is the same wah pedal, just with a boost instead of fuzz. These are full range wahs, meaning they go from the lowest lows to the highest highs we can hear. So it can be used on guitar, bass, keyboards, vocals... anything you can think of. Guitar wahs generally work only in the mid frequencies cause that's where guitars are. Newer morleys just don't sound the same, but are still much closer than dunlops of vox's.

I've since sold both of them, cause while they are very cool and unique I just didn't have much use for them. I paid $150 each which is average and IMO totally worth it. I'll probably buy one again eventually just to have it, but don't know how much I'll use it. For anyone looking for a great but VERY different sounding wah pedal for any instrument I'd highly recommend checking these out.

rotabe's review (This content has been automatically translated from French)

Morley Power Wah Fuzz
5
It's an old pedals in a box with a solid chrome mtallique foolproof, fairly close to the toaster Premire view but it inspires confidence. She does against states in the 70's.

Even when a machine is difficult to hide in a large pdaleboard.

No battery compartment but it has a power transformer Intgr therefore standard plug (not removable).

Both footswichs and knobs are solid.

The wah pedals is connected to a reliable optics and the inconvenience of Vitantis potentiomtres cremailires and other wah that emit noise in aging.

The main advantage of this is to have pedals underfoot two types of effects and surout can associate.

1 / The wah is clear and prcise. It filters the sound less than a Dunlop. Only BMOL can s'avrer useful when looking for a few subtle sound effects: the pedals up too when the sound cuts quickly. In other words, it plays the rle of wah on 3 / 4 of the race (down) and on the part suprieure is a volume pedals.

2 / The fuzz has a particular sound, a fairly crmeux surout and the two buttons "intensitquot, and" tonalitquot, allows him to address diffrent stamp.

3 / The possibility to combine the two effects (Wah and Fuzz) can CRER sounds mind-blowing, the Wah used filtering (envelope)

I use plutt home + FUZZ WAH mode to search for recorded sounds on pieces later.

It is noted that the feedback and sustain provoke held notes in the pedals are halucinants. By manipulating the pedals sparingly and thanks to the natural sustain of my Gibson, I can run constant sounds that eventually swing (as on old Moog!)
For that alone, this is UNIQUE pedals. Only my girlfriend to no longer support long CANCEIS oscillating feedback.

The best thing is that I Mettes some sounds on my profile (coming soon).

This is a unique and exeptional pedals. A collectible.
I found it in a garage sale for cheap: the type does not even know what c'tait.

V old man on the hill's review (This content has been automatically translated from French)" Let there be light."

Morley Power Wah Fuzz
5
The morley power wah fuzz is a gem of 70's analog. It combines a volume pedal wha and fuzz. In morley no potentiometer on the expression pedal celula a module receiving more or less light through a diode. So silence is golden. No hiss. An inlet, an outlet, two potentiometers for the fuzz, two switches to turn on the ultra sound the fuzz wha or both, and the expression pedal very long and wide is raised from its base. The position of a foot in height desarsone all fans of Cry Baby is the limit of the collapse on stage!

Both switches non actiones the Morley volume pedal is ultra quiet but not very intuitive because the control is too direct, less "sensual" an Ernie Ball in my opinion the best volume pedal. But Morley's little to be of service on voluming foot. Now about the fuzz by itself (switch from left) a control of tone and control the rate of fuzz that is injected is on the left side of the pedal. The Fuzz is basic, organic, dirty, vintage of course. I still do not find anything good to do with the volume pedal and fuzz together. The pedal whawha only brings great satisfaction to all the musicians who find too stereotyped Cry Baby (Hendrix, Funk), and looking for a game whawha less sectarian feeling because the foot is the opposite feel of a Cry Baby because the race of the expression pedal is huge (about 6 cm) with a huge range of frequencies, so that although the effect Q (locked position) will become even a fourth effect has loads inside the monster. But the ultimate is the combined use of the Fuzz with the Wha pedal roars and control by the foot makes the game of being orgasmic guitar tell a story each agreement.

Morley is the other family Wha Wha. And this time the Power Wha Fuzz is not the same effect! The reliability of the machine, its silence, and the range of the number of misiciens enchant effect of all styles and all instruments combined disappointed by conventional WHAs Wha. The addition will make the fuzz guitar (metal) directly to the seventh heaven, the effect of enriching the power chords idyllic way. But the bass will find their accounts with a full Wha in his range. And the effect Fuzz Wha, Cliff and Metallica's Jason tells me better than "For Whom the Bell Tolls" live.

Even if my pedal case I ever part with it, but here it will not break. Because its old pedals everything repaired. The only downside for these small diodes that such tubes or bulbs (big sister) let it rip at one time or another. I carries a spare in each concert it happened to me to change between the balance and the concert.

Other Morley multi-Effects for Electric Guitar