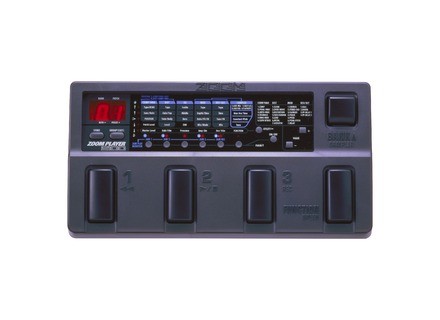 2100, Multi-Effects for Electric Guitar from Zoom.

I like the different options, and the control of three control buttons, that give you instand control to the select group of 3 patches. I also like the tuner that can be accesst by one push on a button (with your feet) if you hold that button longer the 2100 will go in mute mode, so you can tune your guitar without people hearing your doeing so.
I like the different types of distortion the 2100 has, and lots of gain!!

I don't the very very very complexity of this device, you really have to study the manual before you can program some patches.
And the effects such as flanger and facer are, how do you say it... they just don't have it. But the the delay and distortion are very good.

The housing is made of very hard plastic, some people don't like it, they prefer metal of something, but this thing os build to last. The only weak point are the buttons, i think is you are not so gentle with the 2100, then you break it in a month.
I have it for a jear or so, and it was used, and i have no failures at all.

In the beginning i dind't like it at all because i dind't know how to program it, but after nights studing and trying i made it trough. And now well programmed it sounds very nice, i can almost get every sound out of it.

Pretty good effect processor for at home, and also when you practice with your band, but i think you better not use it on stage.

but overall a good effect processor.

Zoom 2100
1
I bought this little piece of s**t from the little music shop near my house. I paid about $100 which was pretty cheap (or that what i tought!)

Why I bought it. I needed (still do) lots of different effects, but i didn't had the money to buy them all separatly.

Well, at the moment I don't like anything that this machine produces.

Something good...Hmm...
Well, some reverbs and delays are pretty good, so is the flanger and phaser (i have heard better one's, but these will do).

First of all, All the distortions are just big bag of s**t! (excuse my language). All the sounds are thin and "plastic". NO NOT USE THEM.

Same goes for the wah-wah "effect". Don't expect CryBaby. The wah is just awful. I didn't understand it when i bought this, but now i do...

If you want to make your sound bad, use the AMP simulations. I did. I have never sounded more horrible. I jused the pedal with Fender Stratocaster '62 (No, not the actual '62, but the new "replica" made in japan) and Hugness & Kettner attax 50. The guitar and the amp sounds good when i plug them directly together, but if i plug the Zoom 2100 in middle... (GOD DAMN, it souds bad!)

The unit has 5 pedals. My unit has only 2 that work. This one isn't build to last.

DO NOT BUY THIS. Only good thing to say about this pedal are the delay and reverb and even those two god be better...

Zoom 2100
1
i paid 120$ from musician's friend because i thought this pedal was going to be something else.

all the effects are terrible. you can mix and whatnot but it's an extrme pain and is still sounds bad. the power supply broke within a few months and therefore the pedal cuts on and off. the only was to keep the power on is to put a 15 lb weight on the power supply where the adapter plugs in. the 5 second recorder is a joke.

Obviously since the power supply gave me trouble within 2 mo's of the purchase, the construction quality of the unit is piss- poor.

I advise that everyone stay away from zoom products.

arzitek's review (This content has been automatically translated from French)

Zoom 2100
4
Modules with multi-effects: distortion, comp / whah, equalizer, modulation, reverb / delay and sampler.
Connection in / out / power to in/9V / pedals
3 patches x 10 bank accessible by foot switches
Paramtrage combination and of each module to store user patches
Intgr tuner with or without mute
No rhythm or mtronome

Use with the factory patches are quite simple,
the making of user patches ncessite reading the manual but otherwise it's not Chinese

The effects of plants are not super Varis and do not exploit all the possibilities, it will spend some time playing with.

Bought used for 60 EUR, I will not complain. The sampler function is nice but the hard is very limited.

Zoom 2100 manuals and other files