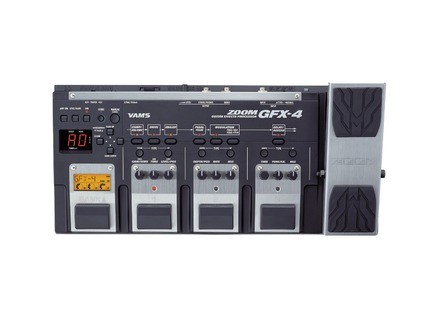 GFX-4, Multi-Effects for Electric Guitar from Zoom in the GFX series.

The quality of effects is high for a relatively cheap unit. There considerably better than my Zoom 4040, especially the distortion effects. The chorus and delay effects have the capability to be stereo which is useful if you can take advantage of it. Its easy to program and use and it has a good display.

The wah is not the best sounding in the world, and the travel on the pedal is limited. But...and its a big but, the main problem I had with it, and the reason I'm about to sell it on ebay again is that there is a delay when switching patches. Its not just that it takes a while to switch from one patch to another, but more that there is an actual gap in sound, its only small, considerably less than a second but enough when playing live to make your sound, sound messy. I have a vamp2 that does the same thing but only when switching between amp models, I have the amp models turned off on the gfx4 and it still has the pause.

The build quality in general is good, the actual pedals themselves may be a bit flimsy for full live use.

As a unit for home use the GFX-4 produces very good quality sounds at a very good price. Its easy to use and program, but as a stand alone live effects unit it is flawed because of the pause switching patches. I have heard that similar priced units from other manufacturers do the same thing so its not just Zoom.
Im currently buying a set of good quality stand alone pedals instead. I give the GFX-4 a score of 4 because the quality of effects is very good, at a very affordable price, its just a shame about the pause.

Zoom GFX-4
5
I got this from American Music Supply. It cost me $200 because it was a blem item. But i couln't find one scratch or blem on it. So I wasn't complaining. Pretty much every store sells it for $250.

I love this thing. It has so many effects combinations that i still haven't figured out. The built in expression pedal is awesome, because you can route it to different things. Such as wah, volume, and pitch controls. With every effect you could dream of having on this thing, it's well worth the money. There is also another nice feature built in. It has a second output which is stereo. Which is great for plugging in to a mixer or a computer. I love recording with this thing!!! One more thing. This unit also comes with a LCD digital screen and LCD lights, which is really nice for those dark stages.

There's not much i don't like about this unit. It would be nice to have a bank down switch. Other than that, this is one of the greatest effects pedals ever.

This is built nice. With a black plastic and brushed steel look, this thing is very eye catching. The expression pedal has rubber pads.

Over all, this thing is a beast! It's for the semi-pro to pro gutarist. So amatuers might not want to fork out the money for this.

david veal's review (This content has been automatically translated from French)

3 months plant once by me
Did you find this review helpful?yesno
»

Hbpm's review (This content has been automatically translated from French)

Zoom GFX-4
5
The effects available are numerous and can be added to each other by 3 or 4, each from a bank by a REPRESENTATIVES pedals. there are three pedals, THE FIRST contains of no effect, but can turn on or dye effects Attributes (pdalier the shunt) and accder the tuner.
Premire pedals: it contains three rpertoiresque simultanments can be used. 1 = cuts more or less good quality according to custom settings, but how good they are diffrent from one another. 2 = qualiseur, it is good quality and is used all the time. anything with him, one can sound very funk, jazz or heavy ... 3 = distortions: there are 13, they are pretty good but not worth distortion of analog pice 140. only the distortion sound is crappy nome, it is hard to scratch out a note to do even with good compression and even with Electroacoustic, it is better not to use the pdalier for an acoustic sound that of use this function.
second pedals: adjustable effects such as chorus, flanger, phaser and other auto wha. it also allows you to set and to assign the effect of cry baby, whether PDAL pitch, volume or whawha. the rglages are good and enough of them, so you have a little patience to find a real whawha with a real sensitivity and not too much lower volume output qd or cutting. possible, if you do not succeed is that you have read the manual.
troisime pedals: delay and reverb. I think the trs rverbes not warm, it does not replace in any case but that of the amplifier can be added without problem and can recover quickly and fairly trs Fidler jef buckley sound even with a small amplli. Deadlines are trs paramtrables ...

connection: two large output jack (mono and Stereo), a big jack from comuter with active or normal and that's it, no PC conection.

The configuration is simpler than on small zooms as more visual, but I think that boss is more instinctive to use. modifying effects of three is always paramtrable potentiomtres each (three types of settings to avoid distortion by expemple we gain, tone and level). for the crybaby, you can also set the minimum and maximum volume.
the manual does not seem to me specially clear, especially to save their own types of combinations of effects but as I am allergic to all what is called manual, may be you will find it better than me. In any case, I still use Russian all with or without the paper.

The effects parraisent me good sound except the pedals. the tuner is way too much, it serves to make me change my qd fast a rope to get closer to the note but Jamia to perfect the tuning of any guitar. I think the distortion lacks a bit of crunch, they are a little too sticky at least with my Fender Start Mex which in any case its a clear trs. with a cort or ibanez it goes better, it can be a dry or nirvana come more frank and heavy as Korn.

7 of the 10 that is only because I put my guitar does not allow me to find my children are serious and distorted that I like but for the rest or with another guitar, I put nine especially considering the price.

I use it for a year and a half and I have to buy anything else since because it gives me everything I need, you can approach all are ca ca dpend scratches. I saw groups of reggae such as that used haya ca j'tait on stage and surprised that it could give a time set correctly. everything is in the research.
for the price and number of possibilities, I find this little machine insolent and essential all guitarists who are looking for. qd you reach the end of these possibilities, you will know exactly what sound you like best and you can invest in a good analog pedals not go wrong.

Zoom GFX-4 manuals and other files