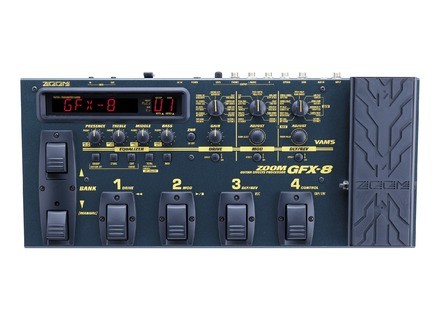 GFX-8, Multi-Effects for Electric Guitar from Zoom in the GFX series.

Zoom GFX-8
2
The available fx are for the most part amazing and sound great.

The setup is a little complicated until you get the hang of it. I thought the manual was hard to understand at first so I kind of 'learned by doing'. Once you have a feel for the way it works, it is rather easy to edit the parameters of the effects. I created several patches to use with my band that sounded great.

My electric guitar is a Gibson SG gothic (which now is only offered by Epiphone, I believe), which I also bought in 2000. With the GFX8 I got some amazing sounds from that guitar but after about six or seven years of use (not all that many gigs but a lot of practicing) I ran into a big problem. (see overall opinion)

The one huge negative I found with the GFX8 was the plastic switches. They break! They rock on a strip of plastic at the top end and after years of use the plastic wears out. The plastic footswitch part is then loose. Sometimes you can get it to work but if you are in a gig situation you don't want to be messing around. It has to work properly or your song may be ruined. As of 2013 my GFX8 has only two unbroken switches: 'bank up' and '2', rendering the board unusable until and unless I can get it repaired. In the meantime I bought the newer (and more roadworthy) Zoom G3X.
Did you find this review helpful?yesno
»

Zoom GFX-8
4
Due to an administration blunder, I managed to get mine for £150. i got home opened it and found a label saying £270!. I was very lucky to have got one at this price, though I think they are actually for sale at that price now.

I went to this from a £70 digitech and obviously think the sound is amazing. The drive unit is great, the delays and flangers seamless, and the wah is the best digital one Ive tried. Its green, I like that too. The CD that came with it didnt work on my computer so I had to download a newer version that had been alterd by someone else (not official). But now it works and I can create effects on my computer.

When I first got it home and opened it I knew it was going to be a nightmare. I couldnt be bothered to read te manual, so went straight onto it. After about two minutes I was stuck, and had to go the manual which isnt that user friendly. After a while I got to know the basics and I was away. What infuriates me most is the knobs, they dont reset. If you turn it on and find ian effect you like and really want to edit, you cant! As soon as you twist the knob is snaps to something comletely
different and you've lost it all!
Its very old methinks, and some of the effects are useless.

Its very rugged and strong. I think if I ever dropped it would be fine. The rubber strip off the pedal is coming off but i can glue that back on easily. The knobs are, well, big and the feel is very comfortable.

Its getting a bit old now, but it still has enough to put it ahead of the Digitech RP2000A. The analog sounds are growing on me, and i reccommend it to anyone looking for a all round effect pedal. If you want the latest modern effects, look elsewhere.

It has very sturdy constucion and has really good metal sounds

Zoom GFX-8
5
I needed a multi effects unit as my collection of trusty old anolog stomp boxes was getting too big to manage. I tryed out the Boss ME-50, the Digitech and the J-station before i spotted this little beuty.
Got it for $600 (Aust) new from a guitar shop sale. This unit blew away the others. Spent 3 hours in the shop just going through all the sounds - amazing.

Comes with software so you can design your own patches, built like a brick dunny, possibilities are endless.
Also the distortion feature kicked arse, you can model just about anything!

Not much to dislike, my girlfriend doesn't like the amount of time i spend tweaking the patches on the computer( i dont mind at all). Expression pedal is a bit weak.

Solid as a rock! 4 seperate pedal switches to change between patches on stage. Easy to use once you get past finding out what does what, LED is good for gigs. Great distortion and good crisp clean effects.
Expression pedal weak.

Fantastic bit of kit, outdoes all units in this price range. Ive got a crybaby so the poor expresssion pedal doesn't worry me. Suits any style of play.

This review was originally published on http://www.musicgearreview.com
Did you find this review helpful?yesno
»
Read the 12 user reviews on the Zoom GFX-8 »

Zoom GFX-8 manuals and other files