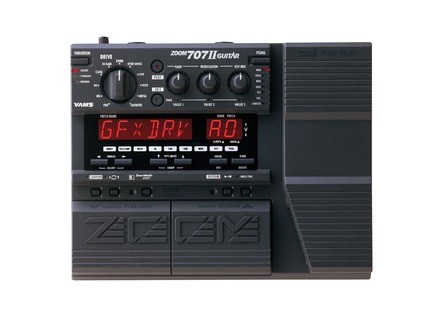 707II Guitar, Multi-Effects for Electric Guitar from Zoom in the GFX series.

8080 has a huge variety of sounds. Most unusable though. All the patches need tweaking. The controls are excellent. The pedal response etc is good, the patch switching is better than most. Good beginner/intermediate material.
The 707II is fun to use, tweaking required here too, none of the patches except the acoustic sims are good. For 707II Manual is perfectly legible and comprehendable, AND easy to use.

I like Nothing much about 8080, because it did not come with a power unit, and it always is unreliable. I could not use it for a whole year after purchase, which is why I purchased the 707 II. That was pleasantly different, no troubles for a whole year, about 2 months back the input plug started getting loose( shimmed up on stage :-( ) got it repaired last month, works as good now. The sounds are strictly okay. I am looking at Korg toneworks 1500G soon..That oughta be better. This stuff is absolutely not recomended for live situations. The 8080 has a pathetic manual, theres so many settings that unless you work through most of them, the manual is worthless.

construction for 707II is good, rugged, better than the 707. The 8080 is flimsy, and plastic. I have a carry/protection case built for it. Makes carrying it around cumbersome.

Dont buy the 8080, theres better stuff available for the money. Buy 707II if you are in the 'beginning' category.

It has a variety of effects - most are quite good. Phase and Flange are both strong, several of the amp simulations are very accurate. This may be a matter of taste but there are several effects that I would be extremely unlikely to ever use.

It allows personal input to shape the effects to suit your own needs.

It allows use with batteries in addition to plugging into electric mains via an adapter.

It is complex to use not aided by the fact that the manual was most likely written in Japanese and translated badly. Though the company has a website, it is also not thorough or clearly communicative in English. It may be brilliant in Japanese- but I wouldn't know.

It has what seems to me to be a completely extraneous drum machine built into it.
I suppose that might be a plus to another - but It just increased the learning curve on the machine for me.

Although it allows saving bits of music recorded onto flashcards, despite reading the manual I have yet to successfully get it to transfer its stored data to the computer.

It does not allow (or I have not figured out) playing and listening -post effects while sending a pre-effect signal to my recorder. - These are manual issues mostly.


It is ruggedly constructed, has over the past 6 months already survived being dropped, having cords and other gear dropped on it, being taken over as a cat-bed by a kitten and other usual daily -real-world use.

It seems to have remarkably strong battery set-up. 2 sets of batteries in 6 months compares very favorably with my digital camera - which uses a minimum of 1 set per month.


Sturdy, versatile, fairly priced, but with a long learning curve and poor materials to help one to learn.

This has some very nice effects which are combineable

Not being very technically minded i especially liked the pre-set FX, most of the sounds you are ever likly to need are in there and can easily be tweeked by the turning of a couple of knobs without going into the bowels of the thing and getting a brain overload, the sound quality is excellent and the peddle is a lot of fun, it sits comfortably with amatures and proffesionals alike, it is an excellent price without compromising quality, all togather a very impressive bit of kit.

The manual looks like it has been taken straight from einstein's blackboard, fortunatly you only have to use it as a last resort as most of the things your going to want to do are so straight forward and easy a "Chimp" could use it.

At first glance it looks pretty fragile and appears to made out of the same stuff as the 505 unit which i have gleefully abused wickedly over the years so on that basis its really very tough and i have no worries about standing or kneeling on it or even giving it the odd boot as the 505 has suffered many times over the years, so to take all that and more it must be of excellent quality.

If you are considering buying a multi FX peddle then this is the one for you, be you first time buyer or upgrading, its well priced, durable looks cool and sounds great and it would probably do a jig for you if you asked it nicely, what more could you ask for, superb.

Zoom 707II Guitar
4
The unit cost 198.00 purchased over the internet. We didn't have a drummer in our band and wanted to add a percussion
to our music.


It has plenty of rythum tracks to choose from. They are adjustable by beats per minute which which is displayed. This makes it easy to keep a record of the settings for each song we play and dial them in easily during performances. The effects are good and also easy to program and retrive.

This is a very good product for begining and advanced musicians. The effects along with the jam feature are excellent tools for playing alone and with your friends.

This review was originally published on http://www.musicgearreview.com
Did you find this review helpful?yesno
»
Read the 21 user reviews on the Zoom 707II Guitar »