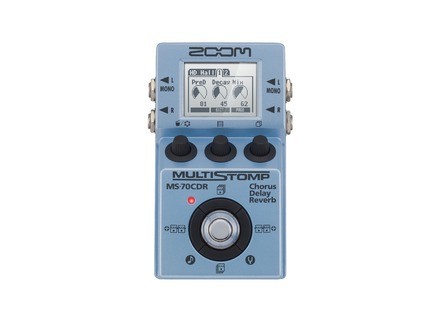 MultiStomp MS-70CDR, Multi-Effects for Electric Guitar from Zoom in the MS series.

The general configuration leaves me a little skeptical - I'm used to editing on a Mustang Floor whose "programming" seems to me more intuitive. The manual is quite understandable, however the overall architecture of menus asked an adaptation and "auto-save" function time I was a little confused at first.
Effect settings themselves are ultra-simple and very effective. However, I will put a damper on the overall architecture of the management menus and logic.
This pedal may agree to make the scene using personal presets on the express condition of not having too since selects using the single footswitch making the scroll in the order of the list of presets. Imagine having to go from 1st to 30th with a single button!

Effects, there is a plethora! And the plethora there is something to find happiness.
I use this Multistomp loop in my Fishman Aura for my electroacoustic guitars (Epiphone EL-00 pro, Hanika BASIS cut) primarily for the Reverb and echo.
The sound quality is a bit variable depending on the effects, but never bad it seems to me. Some reverb, echo, chorus seemed to me really good given the price of the machine. In comparison with my pedals TC Electronic Hall of Fame and Flashback, was not done all at the same quality (a little something artificial with the Zoom, but can be compensated by slightly reducing acute effect), but it is not very far. In condition of scene, with frequent hazards quality sound, this Multistomp can, in my opinion, get away handily in sound quality.
I also tried this Multistomp in the loop of my amp Egnater Rebel Combo Laney CUB12R I dedicated to my electric guitars, and I was amazed by the sound quality.
The factory presets seem to me against mostly clear!

I use it for a month. I have not been around very precisely all the effects available (and I never will there too!): I quickly picked the ones that suited me best and confined myself to those there. Must say I'm not a big fan of tweaking sounds: with 4 presets properly adjusted, it largely covers my needs.
What I like most: there fine echoes and reverb, easily adjustable; ditto for the chorus. The presence of a filter gate. Setting menus effects themselves are simple, intuitive and effective
What I like least: the edit / save presets a bit confusing for me system. The color of the box! (Not important!)
The quality / price? really excellent!
I would do this choice? Oh yes! Besides, I'll buy an extra to incorporate into my pedalboard for electric guitars for use in modulation effects (next to my pedals TC Electronic Hall of Fame and Flashback) and substitution TC Nova Modulator that operates capriciously.

scarabeo's review (This content has been automatically translated from French)" Really good ..."

Finally an intelligent product. I rarely post reviews but now I make an exception.
Unless you are an ayatollah original effects, this pedal offers so for less than 100 €, it will change the situation in bcp guitarist and bassist.
Happiness despite use 2/3 (small) defects ergonomics:
- In a chaining effect, bypass the foot works only for the effect which is "virtually" to this location. But there is a pirouette to bypass all of a sudden the line selector must be set at the beginning of any chaining.
- The tuner might be a little more stable and accurate but it works well even when
- For delays, the tap is in a sub menu. Weird things, the delays retain their value even if you're ms tempo. This is unfortunate, because there must be a conversion sheet tempo if you want to stay in the nails.

Unusually, there is very little effect to throw or even none. All will serve one day so they are good.
The chorus are guns, all delays, from the simplest to the most sophisticated, are there.
Contrary to what I read elsewhere, I find really good reverbs. Maybe a tad digital, but honestly in a mix, they "fall" squarely well.
This pedal would be perfect if Zoom had added a small comp. But I think it would encroach on more oriented skyscraper MS 50.

I've had 10 days, and try to adopt it.
She travels of my pedalboard to my Pod Pro eg. I returned to live with the pedal between 2. To save without using the effects of Pod, this is really good.
In short, I highly recommend it, for me it is full carton.

In front, not in the loop, stereo with two Fender.
Manual available in French, effects list (many emulation existing gear or existed) available on the site. Rather clear and not mistranslated. Easy Edition

Then the sound: I have a TC Flashback, a Line 6 M9 and racks home studio style TC M-one or Boss SE-70. I did some comparisons:
The delays are correct: in the average and there is choice. More than Line 6.
Chorus: The highlight of this machine, the choice of a lot better than Line 6 has always been pretty bad on the subject (M series and Pod)
The Reverb, I'm a little disappointed, a notch below the rack TC M-one example (I plugged in front of my amps for comparison), probably a bit better than the M9-Line 6. Still, for the price it is ok, but probably the TC Hall of Fame is doing better. So if you want reverbs a bit thin, forget the MS 70CDR you will be disappointed.

2 weeks. In my opinion, the best offer in terms of simulation effects Chorus / pitch the market. Pretty close as if the Line 6 M9 for delays, but accessibility to tap tempo here is less flexible. Say congestion and philosophy are different ...

Several things could still be improved:
A second switch for tap tempo would be a real plus.
Correction of minor quirks ergonomics: the ability to bypass multiple effects at once with the "Line Selector" is good, but when a patch containing multiple effects is loaded, it always loads the last, not the "line selector", suddenly, several manipulation 'are essential if one wishes to the entire patch ON / OFF. Shame!
Disappointed by the quality reverbs, very colorful. Should be more natural algorithms, less dark, thinner because even in a guitar amp, you can hear it. We are still far from a studio effect or an entry-level plug-in.

But compared to the price, it is still an incredible little pedal. Less flexible than the Line 6 M series, but with much better chorus and the size of a standard pedal.
When will change with better reverbs, a double switch for tap tempo, while keeping the same format?

Maltigow's review (This content has been automatically translated from French)" Very good surprise!"

Zoom MultiStomp MS-70CDR
5
86 modeling effects (modulation, delay and reverb) in the format "stompbox" classic + tuner, so significant that I must quote mode.
Pedal extremely well thought out and looks solid. "Who the air" because we have to see if all the controls take the long term.
Stereo inputs and outputs, power supply via batteries or 9V DC classic.
The format is just great for this type of tool. I secretly dreamed of a dedicated "delays / modulation" compact to put the end of my pedalboard ... Really happy solution.

The manuals are arranged online and essential, especially for the list of effects.
The general principle is that you can store channels 5/6 effects, I think there are 50 presets.
We can name, I find this little extra interesting.
3 ways to use "live":
- Presets are assigned to a "cascade" (one existing!) And password footswitch presets review
- It shows a particular effect and acts as a bypass footswitch
- Effect "Line Selector" which bypass all of a sudden everything is downstream is added

I find that it lacks two things ...
- A looper / recordeur: Some delays are to 4s, it would have been cool to be able to manage even that these 4 sec with a record start / stop record / stop loop on the footswitch.
- The direction of the "Line Selector," which bypasserait suddenly everything is upstream. (Or bypass the 'x effects following' as a loop)

I put him 8 for this, but I feel guilty because it's nitpicking ...

No complaints regarding the quality of effects ... And especially to the overall quality of sound. The pedal is not true bypass, but very very transparent. I especially dwelt on the delays and some modulation effects and is very well finished. No unnecessary control or crappy. The effect palette is impressive and well varied ... Classic, softs, extreme, lots of interesting things.

Big plus:
- The noise reductor I find really damn good ... The pedal itself seems quiet but as I plug in the end pedalboard, it is welcome.
- Graphic EQ very transparent and very efficient, very pleasant surprise!

I've never been a big user of reverbs / delays / modulations. I bought this pedal for me to put a little more seriously, strengthen somewhat the presence of my sound, etc., not even sure I will include it in my pedalboard actually. As said before, I had always wanted a box to do everything at the end of the chain, so when I saw the MS70CDR out, I fell quickly.
In addition to assuming the role perfectly multi-delay, it replaced my graphic EQ, my noise reductor, my tuner / mute, an ABY and downright my Vibratrem the Vibrato effects DoubleTremolo being more versatile and De ... Best quality! Pleasantly surprised and impressed overall. A very nice product.

Did you find this review helpful?yesno
»
Read the 6 user reviews on the Zoom MultiStomp MS-70CDR »

Listen to the 14 audio files about Zoom MultiStomp MS-70CDR »