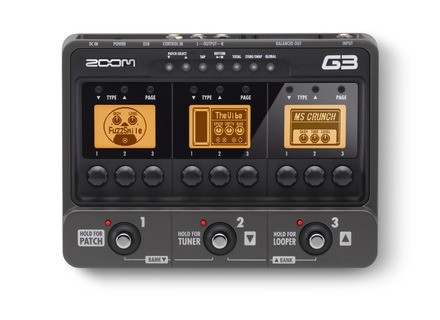 G3, Multi-Effects for Electric Guitar from Zoom in the G3 series.

View all offers for Zoom G3 »

Zoom G3
5
I have had this for 18 months and have used it as a standalone Amp sim, an FX processor in FX loops of amps, Preamp only, USB recording, and USB interface (FX Bypassed!). This unit has excellent sound quality! The dist/OD sims vary in quality but the TS and Boss OD excel and the Boss CE-1 is dead on as I have tested it against the real pedals. The Krank, ENGL, and Mesa MK3 sims are amazing and the Marshall sounds are good as well. Played the Recto into an Egnator poweramp and it was a perfect Metallica at the store. Great tuner & Looper!! This is just a great value for the $$! I can get almost indistinguishable Kreator, Megadeth, Jerry Cantrell, EVH, & Dime tones out of this! Most versatile Amp sim/FX I have ever had. Absolutly will not trash your sound either!

RodTheMod's review (This content has been automatically translated from French)" The Swiss Army Knife!"

This is obviously all-digital.

The pedal is very easy to use, I was expecting a gas plant, but not!
Editing sounds is quite easy as well as changes of patches.

The effects are very convincing! I did not expect such quality for this price!
ZNR (noise reductor) is wonderful, the chorus are very good, the delays are very well designed ... very good!

The amp simulation are quite satisfactory but I use the zoom in the effect of my Blackstar HT 50 loop, so no amp simulation, of course.

Here is my preset, which is very simple:
1) I = ZNR clicks when I go into distortion. With him more than breath problem or feedback even at high levels of gain and volume.
2) Vintage EC = Sound typed chorus Metallica, or you love it or do not like, but as metalheads, I find it very interesting.
3) Tape echo = To expand my solo sound. What's great about this lens is that all the pedals have a knob "level". It goes from 0 to 150 and between 101 and 150, it boosts your signal! In short, in a phone switch, I add an effect and I boost the volume for my solo, and that's really great!

€ 138 for a pedal that can plug into an amp or PA rpt ', which allows you to save on pc, that sounds wonderful in the effects loop of an amp and has a looper and a drum machine, it's really a gift!

This is a much better price / quality ratio that the TC electronic nova system!

I remake this choice without hesitation!

Zoom G3
5
So far as we dream of a pedal to do everything well, we is not too far away or it does not lack great things.
The effects on the content and G3 are multiple full Chorus, Delay, Flanger, Boost, reverb, amp simulation, looper, tuner, etc. ... there is almost everything.
We can edit deplus effects pc with program edit / share is friendly but not very explicit (prmière manip I deleted everything, it is to say) thank you to restore factory.

Operation is simple when you have understood the logic of the machine, but I regret the trouble to use a more complicated set the stage for three effects that become a preset is ok nickel activates and deactivates but beyond oufff (preset change or tilted 3 3 it is very difficult for the live.
For the edition of the effects of a minimum experience in the adjustment of sound, chaining effects and still update, a novice is likely to pull your hair.

The modulation effects are perfect, the delay very effective, the sping reverb and room, arena well done, one for chorus and flanger and boost.

I put a - for distortion, in fact, the distortion is not very good as it virtualizes pedals of reference, it is similar but lacks the warmth inside. The DISTO effect and there are quite doing their job, the looper is simple but effective with more than drum loops can be found in the Line6 JM4 with metronome, beat, rock, pop etc. ... nice to together for the good work and in the time that is not negligible huh

I tested it on U.S. TV and Amp lamp, well set pedalier we get to do some cool things in my config I vraiement uses for Modul effects in the effects loop, added pedal Analog effective and well great result for me and I keep ^ ^.

For a multi who offers us many things with a very decent quality at a price of 150 € ~ I believe that there is not a hesitation. It will bring to those who lack it is already essential, it will be ideal for testing various multi conbineson effect.

I enjoyed some pedals thanks to G3 which give me the desire to test or buy the original pedal. I find nice the idea that there are sound and ideal for chaining to buy virtual target that can avoid an unnecessary purchase.

Zoom G3
5
Given the amount of effects available (99 according to the doc), he should not miss much: distortion, wah, flanger, chorus, delay, reverb ...
More than 22 very different amp simulations.
They are editable on PC and Mac via software rather nice graphically but not necessarily intuitive (unless Fender Fuse I use a Fender Mustang I).
Fully digital technology.
Sufficient connectivity for home, headphone output, input / output USB handy for editing effects and backing tracks to play on (it also feeds very well G3), input for optional expression pedal and finally a balanced DI output (without useful for me).

Configuration much easier and push the Mustang. All effects are as individual pedals with their adjustment knobs (gain, level, decay, shape, ...) easy to adjust thanks to the screens very readable.
The manual can be run but when you start in the effects ... must try to understand his ears with the influence of each setting. Long but educational.

I play the guitar recently (following in the son ...). I wanted to start with good material to keep long: Hagstrom Super Swede, Ibanez Tube TSA15H.
The amp sounds beautifully but has no other effect than its TubeScreamer integrated, which is sometimes a fair bit as songs played.
I hesitated to take a multi-effect to not spoil the sound.
I do not regret anything Zoom: input façade, TS off ... a real pleasure!
The effects are very clean and had a few factory presets breath were manually corrected (reduced gain on the amp simulation or the overdrive / distortion and noise gate at an end just in case).
The distortion is probably what happens the less, other effects are ... as I hoped.
Warning against by the power source multi. Nickel battery, AC adapter or USB on all depends on your circuit. Taken on the same circuit as the TV or the steam plant ... awful big buzz assured. Even after an inverter connected computer.
Taken on a circuit without interfering device plugged nickel, no buzz even on presets "hards".
I played with two humbuckers on my guitar ... to do with less hefty single coil output. But I doubt that it plays a lot.

I discovered intensively as a kid with a Christmas gift.
This is my first multi effect and I think to keep a long time.
The scope of irreplaceable analog pedals but overpriced ... it is not for me. This is a hobby, albeit taking, but not a profession and this little computer all digital fine with me.
By fiddling I found a sound way of my guitar models and € 150 to take to the Shadows, Nirvana, The Beatles (factory preset also very clean), Metallica or ACDC in a round knob, it is very motivating to learn, again and again ... and if the sound is not perfect, it is the guitarist who is concerned that little box in quality / price ratio definitely unbeatable at the moment.
I especially like the sound very convincing, ergonomics at home, and the price can play with headphones and with backing tracks at night without light ...

Did you find this review helpful?yesno
»
Read the 16 user reviews on the Zoom G3 »

Published on 01/18/11
Zoom's G3 Guitar Effects and Amp Simulator Pedal is designed to unite "the ease of a stompbox pedalboard with the power of a multi-effects pedal" and adds a USB audio interface to the mix.

Listen to the 48 audio files about Zoom G3 »

Zoom G3 manuals and other files