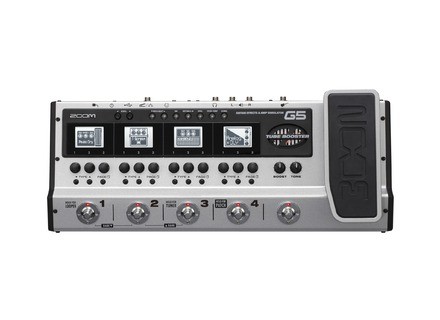 G5, Multi-Effects for Electric Guitar from Zoom in the G5 series.

Very simple and very readable with these 4 screens
Simple editing

the factory presets are not great but clean sounds and some crunch
For the metal distos revo1 amp (krank) with a front and a drive pedal marshall cabinet as give a good result. others are bad.
distos for crunch sounds amp ms drive with cabinet suitable not sound bad
The lamp (tube booster) makes the bass sound, but the headphone is excellent.
to amp it sounds great; no excessive bass, no shrill treble, all is well defined if care was taken to make its own adjustments.
patch that can loader on guitar patch zoom g5 are not audible before loading and no explanation for the use (headphone, tube amp, transistor amp).
At this price it's really quite good.

Compared to line 6 Boss etc ... more expensive or cheaper .. well then Zoom buries the competition!
Did you find this review helpful?yesno
»

Zoom G5
4
Multi effects with a lamp in the form of compact crankset.
Input jack, jack and XLR outputs.

Tested first with headphones.
Nice clean sounds.
Some presets not bad at all but plant
to settle, at least for headphones.
Metal sounds without sizzle through the tube booster;
ever heard through headphones, with a multi effects
or guitar rig or other of metal sounds so cool!
Builders of multi effects pedals and distortion
should emulate.

Better than any other multi effects pedal or distortion
at least to play with headphones and record live line.
It remains to remove the slight hum you hear the sounds
distortion if the agreements we let it ring. (The solution?
A test on amplifier transistor and lamp.

scatblue's review (This content has been automatically translated from French)" not bad!"

Zoom G5
4
Multieffect not very bulky with a multitude of effects of good quality .a two XLR jack outputs for amp a headphone USB connectivity

effects are effective and fairly realistic one small problem for amp simulations that are far from competing with the original (like all multi effect in general) but for the rest it is very correct unless you go through the XLR on a console exemple.cette XLR is unworthy of this pedal. to compare I have plugged my Palmer PDI 09 The Junction on the amp output and no picture is the day and night.

I use it for 4 months .I buy this multi effect for home and rehearsals
because I play on stage with pedals (this is especially for avoiding misuse I have had bad experiences with multi effects). What thing do you like most? The value for money, especially the USB computer interface. How do you like the least? the XLR output and boost tube music not for two sub

azertyvince's review (This content has been automatically translated from French)" MEDIOCRE"

Zoom G5
1
Edition via PC possible.
Manually editing also.
Digital multi-effects with lamp sortie.Processeur 44.1 kHz (96 kHz against its predecessor).
Simple connectivity (no MIDI input, no effects loop).
The pedal has switches numbered 1 to 4, which suggests that there are 4 patches per bank, excluding use it seems that the 4th is locked, the display does not patch, but no the bank. There would therefore 3 patches per bank.
While ZOOM G7 and G9 had respectively 4 and 5 patches per bank, where it seems that one falls to 3.
Many switches have disappeared from the G7 and G9 (more switches specific bank change over switch amp change over switch function, which allow to extend the possibilities of the bank).
There is more than one expression pedal compared to G9.
A lamp and transistor preamp settings have disappeared from the G7 and G9. The tone control lamp on the G5 is not used much in my opinion.
I also find that the Booster lamp and switch are superflux the lamp enough.
In this proposal, there is more control in the preamp tone simultaneously (replaced by adjusting knobs freq 4): this is in my opinion, less manageable and fully redundant with respect to eq 6 bands put into effect, so that general tone setting complemented well eq 6 bands on the G7 and G9 (2 sets were very interesting to scupter sound).

Manual editing is simple.
I have not tried using the PC.
The manual is quite clear, everything is pretty intuitive and clear (more than his predecessors: G7/G9).
on the other hand, it is regrettable that the effects are not classified before selection during manual editing effects. Must scroll through 100's effects before you find one that you want to insert in the chain.

I totally agree with the opinion of Mickhendrix (below).
This is well below the G9, I also 5 years.
G5 tested in a Marshall Valvestate entry 8080 (clear channel transistor)
then in the loop of the amp (the "amp head" and "power amp has been selected in the G5.
Where G9 was the result of a compromise between numerical simulations and lamps (analog), where these two aspects of his were well proportioned, forming a single entity and providing sound quite natural, G5 meanwhile sounds pretty synthetic.
On the G5 it seems to find these components (digital and analog), but so unbalanced. Digital (simulations) is in the foreground.
The two components (the simulations and the 12AX7) do not fuse on the G5.
Simulations and synthetic sound effects G5 and it's even worse when we combine 2 or 3 effects. This was not the case on the G9, in any case not at all at this point.
Question her, the G5's hard to reproduce some sounds fine and cristalins that could happen to produce the G9.
On the G5, I feel that the simulations also compress the sound loses the sweetness of the natural attack and there was on the G9 and G7 (despite setting this "tube" to zero on the G5).

All this is very disappointing when we had the G9 and we enjoyed it.
Used a morning tested with the G9 side to compare,
and restored to the store.
There's no photo, even if I feel that both bikes come from the same place a sound point of view, I think the G5 next to the plate.
This crankset that brandishes ZOOM as "The Answer" is, in my opinion, the answer to anything.
I rather like cheap pedals, economic version.
I feel that ZOOM foolishly copied concurrency, while G9 was quite original and was very much appreciated.
Putting the simulations and therefore the digital front, at the expense of the lamp, I feel that ZOOM wanted to caricature the sound was more subtle on G7/G9,
as if to shout a little louder than the competition.
Result, the G5 sounds a bit more like a line6 "all digital".

Did you find this review helpful?yesno
»
Read the 10 user reviews on the Zoom G5 »

Published on 01/20/12
Zoom took the design of the G3 pedal and dialed it up a notch with the G5 Guitar Effects and Amp Simulator Pedal.

Zoom G5 manuals and other files