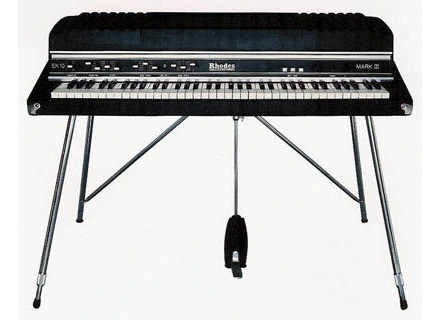 Rhodes Mark III EK-10
5
The Rhodes Mark III EK-10 is a rare electric piano that has a synthesizer built in as well. I believe that this was made in the early 1980's, and I'm pretty sure that only a small handful of them were made. It's probably the most unique Rhodes electric piano that I've used, on account of the synthesizer. The studio that I work at has one of these on hand, although it hasn't seen much use since it's been in hiding. The Mark III EK-10 has a good amount of control over your sound, with more parameters that your standard and more traditional Rhodes pianos. The left side of parameters control your classic Rhodes sound, while the right side has controls for the syntheiszer. I don't believe that you can use the synthesizer on it's own, as it's meant to be used in tandem with the Rhodes sound, giving you the chance to double your parts on the stop. The synthesizer has also got two sets of tuning knobs, so you can set them to different harmony intervals and switch between them if you so choose. There are three different waveforms to choose from for the synth as well. While the Rhodes sound is definitely about where you'd expect it, I'd still probably rather use a Mark I or II to get that sort of sound, although this would certainly do. Having the synthesizer is a really cool feature, although I've yet to find a situation where I wanted to use it. If you're looking to get a Rhodes, I probably wouldn't recommend this one, but it's definitely go it's own thing going on and can do some things that the other Rhodes can't. The Mark III EK-10 Rhodes is a ball to play around with, but if you want a traditional Rhodes I'd recommend going with a Mark I or II...