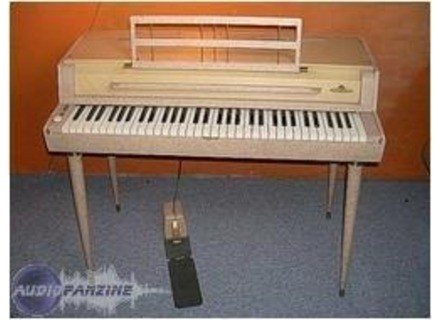 Wurlitzer 120
The Wurlitzer 120 is an early model of the electric piano that Wurlizter would come to perfect in the coming years.  This isn't to say however, that the 120 isn't a great model in its own right, because it is.  It doesn't have too many features, but definitely has the electric piano sound that you would think of when you think of the Wurlizter sound.  The piano only has a single volume knob and a sustain pedal, but this is all you really need beyond the tremolo effect that they would add in coming years.  The 120 looks more like an upright piano than an electric one, but definitely has all of the sound that an electric one does.  Of course like many of the early models of the electric piano, this model is extremely heavy and is pretty tough to move around.  For this reason I wouldn't recommend it for live shows or for anything that you would need to bring it around as it is simply too heavy for that.  It is best suited for use in the recording studio where it can stay put and get all of the use that it needs there.  Beyond the extreme weight of the Wurlitzer 120 it has a top notch tone quality that is definitely comparable to the later models like the 200A and the 206.  The feel of the keyboard is fine and is definitely an easy instrument to play - if anything it feels more like an acoustic one than an electric one, which is something that would be changed with the later models.  These are pretty hard to find nowadays, and if you have your heart set on a Wurlizter electric piano, I would probably recommend looking elsewhere because it is much easier to get a 200A and the 200A is a better keyboard all around because you can move it around easily and probably sounds just a little bit better than the 120 simply because of the tremolo effect.  All in all, the Wurlizter 120 is a great model of the electric piano and if you stumble across one for a reasonable price, scoop it up!