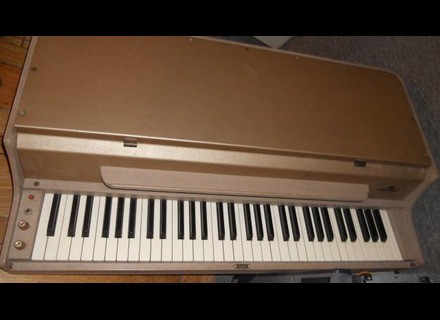 145B, Electric Piano from Wurlitzer.

Wurlitzer 145B
5
The Wurlitzer 145B is a vintage electric piano, probably best suited in the studio because of it's age. I don't know what the exact year is one this particular model, but for whatever reason I believe it's one of the older ones. I'd only played one of these at the first studio that I worked at, but recently a client brought it in to the studio I'm working at now and I was reacquainted with it. The 145B does have a built in tube amplifier, which gives it an awesome sound that I prefer to the other models. I don't know if this one is more sought after than the others, but it's as good if not better than any other Wurlitzer electric piano that I've used before. It has a really nice feel, even though the keys were definitely wearing down a bit on the one that I recently played. I would imagine that this is a common trend as both models of the 145B that I've seen have been quite old looking. The sound on the 145B, as it's an incredibly warm sound. That isn't to say that I don't also love the sound of the Wurlitzer 200 or 206, but this one seems to have a slightly different quality than those. Those are incredibly instruments and probably don't have all the upkeep that this one does, but the built in tube amp in here really seems to make a difference. You also don't see nearly as many of these out there as you do the 200 series models, leading me to believe that this would be somewhat expensive in comparison if you did come across one. Either way, those in the market for a great electric piano definitely need to leave no stone unturned. If you do come across a 145B in your search, you need to give it serious consideration as it's pretty much the best electric piano I've ever used...
Did you find this review helpful?yesno
»