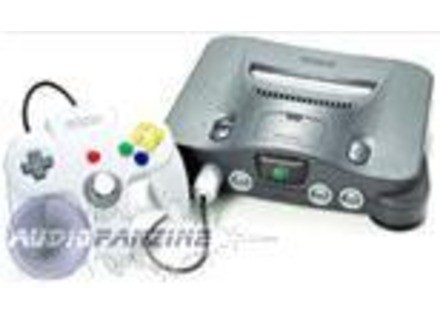 All user reviews for the Nintendo Nintendo 64

Average Score:4.5( 4.5/5 based on 3 reviews )
Not satisfied with those reviews?
Our members also liked:

Nintendo Nintendo 64
5
I've been using the Nintendo 64 electronic game console for about six or seven years and I can remember the days when there was no better console than this one. While it is now a bit outdated, it still holds a place in video game history as the first 64 bit system that made for a new type of graphics. The console has a nice look to it and will last a pretty long time if you treat it properly. The console is pretty easy to use and figure out, even though the controller have a lot more buttons than its predecessor, Nintendo NES. You can have up to four people playing at once, which comes in quite handy for games like Mario Kart 64 which is a staple of this system. While at first the amount of buttons on the controller may seem daunting to the simple video game player, it is easy enough to use that it won't take too long to figure out what everything does. The graphics are clear and 3D looking, which was a huge selling point of this console when it came out. While it can't match anything close to what is out today, it is still playable and for those of us who grew up playing Nintendo 64, there is no substitute. Some other classic games that can be played with this system include Ken Griffey Jr Baseball, All Star Baseball, Super Mario Bros, and Wrestlemania. I have grown to love the games made for this system, and there is really something for everyone. I'm pretty sure that if you aren't familiar with this system already, you probably won't find too much appeal in this system as it probably isn't modern enough for your taste. However, if you like older video games, Nintendo 64 is a great choice. This console with remain as part of video game history, as well as use for those who still have this great gaming system.
Did you find this review helpful?yesno

Nintendo Nintendo 64
5
This console is without doubt the one that brought me more multiplayer madness hits with classics such as Goldeneye, Mario Kart and Extreme G.

Even solo I spent unforgettable moments, with the games mentioned above but also with Super Mario 64 which was a pure massacre at the time and is still regarded today as a landmark in the history of 3D video game!

Turok 2 Seeds of Evil was a slap too! For me one of the best games beat'them all / adapted for console FPS, if not the best!

There are other games that looked as good as Star Wars Rogue Squadron, Perfect Dark, Zelda, Donkey Kong 64, Mario Party ... But I do not offer me at the time because the cartridges were worth a fortune! (450F in nine, the equivalent in euros now a PS3 game nine ...). Did not trust the games OCCAZ at the time, I contented myself with promos that my parents do not mind when I wanted one or more games for Christmas or my birthday. Mdr

If nostalgia comes to me, I'll try to catch up as these games do not cost much more on the market today OCCAZ! ^ ^

The N64 was nice to nerdy at the time compared to the PSX (not allowing cartridges to sounds other than the basic MIDI and with a limited storage capacity for the development of graphical games compared to CD roms) I do not regret not to have had during his heyday and still have it today because I still turn it on from time to time to get into a little Mario Kart or retro gaming session! ^ ^
Did you find this review helpful?yesno

MaEstr0's review (This content has been automatically translated from French)

Nintendo Nintendo 64
4
Frankly this console is the bars .....
too many great games in multiplayer
-Mario kart
-Smash bros
Bomberman-.........

super console
Did you find this review helpful?yesno
Cookies help us improve performance, enhance user experience and deliver our services. By using our services, you agree to our use of cookies. Find out more.