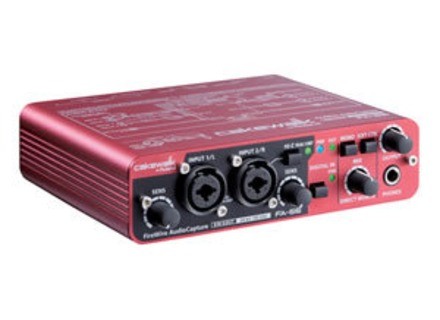 Cakewalk FA-66 FireWire Audio Interface
4
I studied several different products (firewire and USB) and decided to go with the FA-66 because of the Sonar LS included. I am a Sonar 1.3.1 user. I followed the install directions and had some compatibility issues. For example, I had to use the MME drivers instead of WDM. Also, I was unable to use 24 bit driver depth. These problems were with the version of Sonar I was using, and not with the FA-66. Other applications worked fine. Headphone latency is zero, and through Sonar the latency is very low. I am very pleased with the FA-66 even using my current version of Sonar. I'm anxious to see what the included upgrade does.

I run a Sony Vaio A-190, 512 mb RAM, 80 gb drive, 1.7 mhz Pentium M, 400gb external storage, and a Shure SM-57 mic. I use the box as a backup band for practicing bluegrass guitar, fiddle and mandolin. I also do a little recording. One other thing of note, the preamp does not seem to amplify sufficiently, so I have to run the audio through a compressor or amplifier on playback. My next purchase will be a condensor mic to see if that helps alleviate the amplitude problem.

Manual is very clear, you can also download it online.

Overall, I'm very satisfied with the FA-66. I couldn’t ask for much more from this compact interface, I am really not a fan of the color though. I would like to see it in black or a dark blue. It kinda stands out and can look pinkish. But besides the color its perfect. Also, This interface works well in Linux using Jack with the Freebob driver. I have used it for a year and a half under Ubuntu Linux with fairly good results.
The only problem that I have with it is that noise from the computer seems to be picked up through the firewire cable. Activity corresponding to mouse clicks/window updates, etc. appears as little squeals and clicks in the audio. Also, I would have preferred balanced in/outs on all 4 analog channels. For my application. these are nuisances that I can live with.

Published on 01/15/10
Cakewalk has announced the launch of the FA-66 FireWire Audio Interface for Mac OS X and Windows.