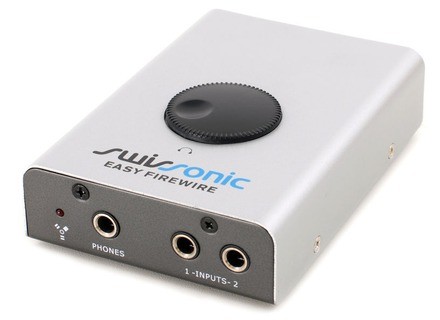 Swissonic Easy Firewire
5
After breaking my teeth on a Terratec Producer Phase X24 FW (it crashes after failing qqs month supply capacitor strong enough), and lacking the means for a Fireface 400, the price " canon "of the card attracted me frankly. Like that, not too much risk (financial) ...

Is to perform the sound pure and stereo sound (I have a mic preamp tubes of excellent quality, the continuity of Fidelta PAM1 but much better), recording on a macbookpro 13 "2GHz + SSD and various external USB drives, Snow Leopard software and making its ultrabasic like "audio recorder." The idea is to make it simple, simplicity with many qualitative benefits ...
And it is also to listen to tapes, and discs (ripped) in iTunes.
Note that the card does not have level controls input / output (except the headphone), which suits me perfectly: the circuit is so simple.
The level will be set on the preamp to the input and the amp for output.

Cables XLR / jack between preamp (which is purely XLR) and Swissonic.
And cable jack / RCA between the interface and the amp.

In fact, I wanted to Extremely easy and very good quality at the same time (and more expensive too, up to 10 times), more consistent supply of the kind, no switching power supply (often who drops it and it sounds worse than a good linear PSU).
I also liked the possibility of 176.4 / 192 kHz (especially as the DM1100 knows how)
I put 7

On OSX, no drivers bp.

The chip used firewire is the home BridgeCo DM1100, which is used in a lot of interfaces, and is automatically recognized by OSX ...

Pb no latency in my case, as I step latency.

I wanted a manual more consistent, but what in effect on a card so simple?

And also on the CD (which is only for Windows installations), it might be practical.

The first test of yesterday, not yet back. I come back, especially if pbs appear.

I tested a few cards anyway before that. Presonus Firepod (which is aging badly and it sounds a bit "cracked"), the Terratec Producer X24FW (reliability deplorable, but its OK, a little better than the presonus seems to me there, cleaner), and a Fireface 800 ( that's extra, I think. maybe a hair opulent, but suddenly a tasty mix of sound and comfort monitor).

What I like with this card is the fact that it corresponds precisely to my expectations.
Features strongly limited right for me, the sound is fabulous for the price, and is good in absolute terms.

The value price is stratospheric, should be put well over 10.

Maybe a card that everyone should have ...
Well wish to buy a second ...

edit on 7 August 2010.
That's it I bought a second. Not had any problems since purchase.
And I tweaked the first in stride.
I replaced a lot of capacity by models II and Silmic by op275 op amp. The result is stunning. We win a lot of richness of tone, and sense of space. it starts to sound really "high end".
For cons, the first reconnection, I had sync problems qqs (time base mac or interface), but it quickly returned to normal.
And besides now, I hear quite easily the differences in time base. 44/16 to read a file in iTunes, I'd rather be in 44kHz (and not 48 88 or 96), and I prefer that the time base is not managed the mac. The sound is a bit softer and softer feel of the timing, less chopped ...
Good for her, I guess we should be able to put 8 or 9 in the absolute (I'd have to compare and / or taken me to do some sound).
Perhaps I would buy a third now.
The next episode ...
Did you find this review helpful?yesno
»

fgrillet's review (This content has been automatically translated from French)

Swissonic Easy Firewire
5
I bought this interface some time ago out of curiosity, to complete my order which was less than 200 euros Thomann and, anyway, to compensate for the headphone output of a MacBook Pro a little weak.

Frankly, for 29 euros, this little box does its job very well. No compatibility problems with the FW800 jack on the MB Pro and I've even been plugged into the FW400 for an external hard drive, itself plugged into the computer's FW800 ...

I use it mainly to listen to my mixes through headphones and the large knob located above the case is very practical. In short, no regrets of my "investment".

Used on the Mac, no drivers are needed. No compatibility problems (Snow Leopard and Leopard). Not tested on Windows.

Er, you connect the FireWire and basta. Simpler, you die! The manual is left in the packing box, like the installation CD for Windows.

One detail that I appreciate from my Audiofire2 is that the headphone jack uses a 6.35. No need to unplug the adapter 3.5/6.35, at the risk of losing it. In addition, the headphone volume is larger than the Echo. Obviously, the comparisons stop there because Audiofire is much more complete.
Did you find this review helpful?yesno
»