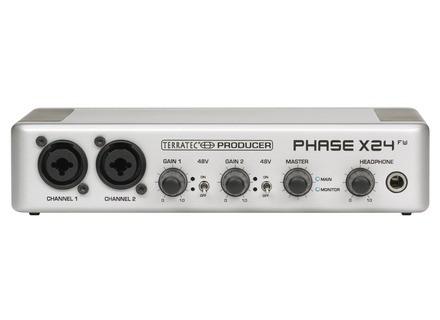 gillou666's review (This content has been automatically translated from French)

More stable I have not seen what I put POCD day rgulire considered by Win OSX and Linux that you ask about LOGIC7 used, GarageBand (OSX) MultitrackStudio, Sonar, Cubase SX, Samplitude (Win), Ardour, Rosegarden Linux Etc ...
RAS zero latency track depending on your gear, like others elsewhere.

Using recent months dj stability for any evidence not incompatibilits this really great day price quality ratio. it all I souhaite.j'en am so pleased that I have the little soeur.une to a PC for Mac
quality quite exceptional for the price Pramp PSU 48V spar sufficient gain and superb definition, fashion Standalone Gnial pramps AD / DA without PC etc ... I had a lot of 'lment comparison to crack even when on the map
FA-101, FW1082, FireBox, FirePod, Motu, Echo, RME, M-Audio, etc ... in short everything that one can can do in PCI, USB or FW I had that chance. for very different needs of course. all their qualities and defects are but the one that really has a price-quality ratio is justified fonctionalit that one. for me for now not everything is omogne defects and quality. if I would do this choice ... without Pb I have two.
Did you find this review helpful?yesno
»

mostly used with a laptop from another age: proc 1.7 G, 1G of ram under debian SID / xp

prev to the inter tray, or wedge face.
sometimes in sound.

Linux, is stable with a jack rt kernel and without using a 3D interface for the desktop, windows xp, it is also perfect for my use.

smooth installation, except for linux in 2010, because of modules to compile and specifically responsible, since settled by the new kernel.
firewire adapter for connection to the 4-pin firewire laptop, I was dropped fairly quickly, and I had to take a nine firewire cable.

ATTENION, it gets very hot, I let the shot all the time in an upright position on the wafer to cool both sides.
I like for MIDI and its output, and the number of outputs, just under the sound input or we find traces of the switching power supply of laptop, or hers, if you push the gain.
the volume knob headphone actually has his head, but I do not use it.
I find the ratio q / p correct and I will ever choose a similar interface.

draculax's review (This content has been automatically translated from French)

I plan to rewire my Berhinger UB1002 rear input in order to make use of the mixer if the need arises.

Ras for installation, just install the drivers and plug the card is asked qd.

Possibility of Routing in the interesting mix TerraTec.
Manuel ok.
Bundled with a nice little Cubase LE, although useful for small machines.
(Used this weekend on a laptop p3 1Ghz/256Mo ram)
Carrying case, FireWire cable of very good quality, and adapter 6 / 4.
Using the AC adapter (included) is required in the case of using the adapter 6 / 4 (no power supply in the firewire cable in this case).

I have since Friday, no prob for now.
The facade of preamp are very good, clear, short, nothing to say, the qualitée sound is excellent, better than the preamp in my UB1002, which in itself is not very difficult.
For the price, I can say is a gift from a friend, following a request. : D
I really appreciate being able to activate the phantom power on the facade gun separately.

Note the optical output of the machine in the ass, which I wired into my stereo amp LUXMAN A-007. Useful to use the card in a player foobar2000 type and distribute the hifi system.

Terratec Producer Phase X24 Fw
1
I needed an external sound card for use up to 192kHz for both the sound and the acoustic measurement. Mac (2GB MacMini 1.66 GHz), but can also be an opportunity for the PC.
The previous ones opinion made me choose this X24fw.

Ease of implementation, quality sound, quality of Casing: no!

a OSX installs itself, and the sound is really not bad:
the two words that come to mind are quiet and distinction.

May be should I try to amliorer hardware, replacement op amps (in between there are 833 that I want to replace with LM4562, and by JRC45800 OP275) and some capas ( link) by Black Gate versions audiophiles or Silmic II.
But it's dj trs well as a.
We will see later.

Only Cubase LE4 (included) got a little broken foot: the beginners, unable to open the "Control Center licenses", which is installed but not visible n'tait.
By installing an old version of Cubase SX, this software has emerged, and was able to complete the installation of Cubase LE4. But the hardware has nothing to do with a.

Pdf manual is sufficient for installing the hardware.

Driver stability of a rock.

Personally, for the sound purely stro, I do not care about latency, but that's OK.

I do not use only recently, but the quality of the product is gnrale empty.
(That's "made in Tawan" and not "made in china" today, has often more than a nuance)
I know quite well the FIREPOD prsonus, which seems a little less silent. The quality of sound, the noise outside, appears above. And 192kHz, which is not a pb is a plus.

The report seems to me excellent quality price.

In fact, there is a (small) perfume high-end, for a price that is not.

Top: solid easy to use sound.
Cons: not in CASC 176.4 kHz (I like multiples of 44.1 kHz if the treatments are manuscripts, made a little less than rounding errors)

As competition is not better, I think this Phase X24fw is an excellent choice, great value price for a quality machine that is of quality.

02/04/09 update.
That's it came gradually, but the map ended up breaking down.
In beginners, the 192kHz became impossible catch. then sync is lost each time standby MacMini. Recently, it was not until the card is so hot sync "hold". Finally, the sync does now qqs seconds.
APRS auscultation, it appears that a capacitor has not aged well. It does not in any obviousness Crits above 105C (all pb capacitors made in china). But his replacement does not help, probably something else suffered. Logic, with all the power supply dcoupage: poor capacity may send a HF modulation across, may hurt these things-l.
Too bad, I liked the sound really good, even c'tait a bargain that price.

In the end, I would spend probably an RME. In esprant the reliability is better (I think that's the case). As for the sound I heard, it's good trs trs.

Of course that called for me, the overall score from 10 0.

Did you find this review helpful?yesno
»
Read the 6 user reviews on the Terratec Producer Phase X24 Fw »