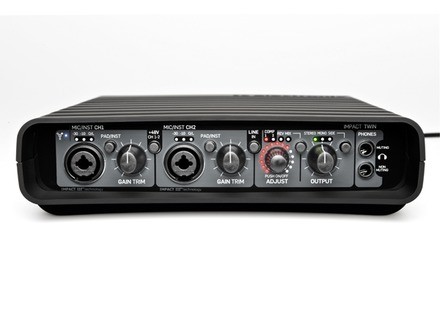 TC Electronic Impact Twin
5
The TC Electronics Impact Twin is a firewire interface with a total of 14 inputs: 10 of them are digital (the signal comes from either the ADAT or the S/PDIF inputs) and 4 are analog, with line inputs at the back of the unit and two mic/line inputs at the front with phantom power available and two very good preamps. It also has MIDI in/out, four output channels (or two stereo pairs) and a headphone output.

On the processing side, the Twin's converters can go up to 24 bits/192kHz of resolution (but only 48kHz for the ADAT channels), and it has an awesome control panel software with built-in eq, compression, reverb, etc.

I use it with my mac mini (2011, i5, 8GB RAM), with Logic Pro X and sometimes Reaper, mostly to produce soundtracks for videogames.

I usually record only one or two channels at once, but have used the Twin with all the 8 ADAT channels (audio coming from a yamaha digital mixer) a couple times and it worked flawlessly. Latency is very low, and thanks to the control panel you can use the built in effects to have a nice sounding chain without using any plugins from your DAW - and still record only the dry signal. The patching on this control panel is pretty simple and while some effects have only one knob (like the compressor) you can hear that it affects different parameters at the same time (ratio, attack), which keeps things simple and efficient during a session. The reverb sounds great.

The pre amps are really good, transparent and nice sounding. A friend of mine who also has one said once that "it sounds a little too harsh in the upper mids", but honestly I've never really noticed it. I also like the headphone amp a lot, no matter what headphone I plug into the Twin, it always sounds clearer than the same one in another interface. Another good thing are the two phone outputs: one mutes the output to the monitors and the other doesn't, cool resource.

Never had any issues with drivers stability or compatibility with the mac, I pretty much just installed the Control Panel thingy and was ready to go. The basic stuff is plug and play, and if you want to go into everything that the control panel can do for you, a look at the manual might help.

Never needed the customer support, but other people I know had and they say is pretty good. Also I've never dropped the unit, but it looks like it wouldn't suffer much, it looks very well built, sturdy.

What I like most about it, in comparison to the equipment that I've had and used a lot in the past:
- I can make my regular (two channels) recordings at home and easily plug it into any ADAT (from a mixer in a studio, for example) to get more channels if needed.
- The audio quality, both from the pre amps and the headphone output.
- The effects in the control panel and the bundled plug ins.

What I don't like about it:
- In 2014, let's face it: firewire is kind of a problem, we don't know how long this is going to last. It's the only thing that would keep me from buying another one.

Overall, if you already have a computer with a firewire connection and don't plan to change it too soon, the Twin is definitely a great choice. In my opinion, the best audio interface in it's price range, probably even better than some other ones $100 or $150 more expensive.

TC Electronic Impact Twin
4
The Twin is made by TC Electronic and it is a very simple interface to use with a lot of ins and outs. It is a 14 in and 14 out interface that has two great microphone preamps and comes with a few plug ins and Ableton software. I have used this interface with Abelton, Acid, Reason, FL Studio and a few other programs and it has worked fine with all of them. For a while this was the only interface that I had owned due to getting my home studio redone so I had to use it on my PC running Windows XP (at first) then on my Vista PC and it never gave me a single issue no matter which computer I ran it on or which software I ran it with. It seemed to be very versatile and had great preamps for it to be this price.

I love everything that TC Electronics puts out because it is always made with quality and they have great customer support. I have had some smaller issues with TC stuff in the past but the support people on the phone always walked me through it without paying a penny. This interface was great right out of the box and I had no issues with installing and the drivers where very stable.

This interface was small and compact, the manual was clear and sufficient (though it was a lot of pages and I don’t understand why). All of the main and basic functions of this interface are easy to use and work with. If you use Ableton than this interface will pretty much automatically work and you will not have to do anything if you install the Ableton that comes with it and follow the instructions you will be up and running in as little as 15 minutes.

This interface is compact and small, it gives a great quality and the preamps are clean and warm. This unit should cost about 50 dollars more than what it does considering the quality of the preamps and how universal the interface is with other software and computers.
Did you find this review helpful?yesno
»

TC Electronic Impact Twin
5
no time to write an expos on the subject I leave a simple note.

DipterePow's review (This content has been automatically translated from French)

TC Electronic Impact Twin
4
What technical characteristics have motivated your choice: firewire, the conversion rate and simplicitbr />
Which instruments and systems (console, prampli, DTD ...) you use it and how connections? ...: Macbook Pro and Live 8; Keyboard Alesis Micron and Wavedrum X Firewire

For what purpose? What is your config (Map mother / CPU / Ram / Hard, ...): Composition and mix (ps live in public for the moment)

Do they fool stable drivers: Yes the compatibility with mountain lion pos of problems for installation: I dt again several times before the installation was working;? Installation on Seven (to test) does not pos problems.

Is Gnrale easy configuration: The interface is clear enough to quickly understand the operation.

Is the manual clear and sufficient: Yes

I use it for about 2 years; This is my first sound card; so I learned and discovered how a sound card through it, and without any problems. (To know that I do not use virtual among)
Peculiarity that I love the most: Despite firewire, it is not very greedy in power, and the conversion rate is maximum;
Peculiarity that I like least:-controlling volume should be ALSO accessible via the front panel; not just by the software.
Bought B-Stock, and in comparison to other in its class, its price is everything - is reasonable.
I would do this choice without hsiter.
Did you find this review helpful?yesno
»
Read the 9 user reviews on the TC Electronic Impact Twin »