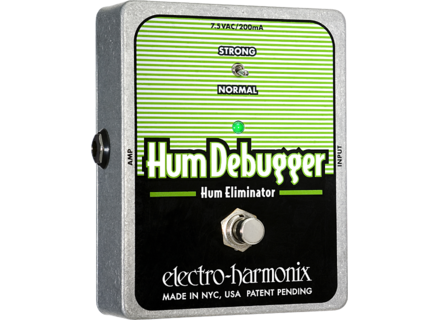 Electro-Harmonix Hum Debugger
3
The Electro Harmonix hum debugger is truely a one trick pony. It has a quarter inch in and a quarter inch out and one toggle switch to select the amount of hum to remove. It is a true bypass pedal and has a good stomp switch. It can only be powered by an AC adapter and only by the one supplied with it so DO NOT LOOSE IT. I'm not sure how it achieves the effect but it does remove the hum associated with single coil pickups.

The manual was incredibly simple but the operation of the pedal is a no brainer, have hum turn it on, still have hum flip the switch to strong. It is meant to be used in your effects chain before the amp.

This can be used with a guitar or base that has noisy single coil pickups. I guess it will also help if you have a poor lighting situation that is causing your humbuckers to hum. I am impressed in how it does what it states but there is a price to be paid. A price that gets steeper as you increase the level of hum removal. I find that personaly if I am using a guitar with vintage single coil pickups it is because I am desiring a touch sensitive playing experience. I want all the subtle nuances to come through. Every pick stroke is important. All the effort put into putting dynamics into the piece is there for a reason. These are the things that become important to me in that situation. While the unit will remove the hum I also have found that it not only dulls the sound a bit but worse it takes away almost as much of the dynamics of the passage as it does the hum. Playing under the strong setting to me is pure hell and I would rather rely on a coil tapped humbucker than be stuck with the finest single coil having its soul robbed from it. While the loss is not as bad under the normal setting there is still hum present in the signal at this setting. It always returns to the question of is the hum even really that bad compaired to the feel being lost and the tone being dulled. I do not know if it is a bad design or just something that can not be seperated in life.

The thing I hate about this is it does work but in my opinion the price of quality and feel loss is too high. I may be a bit prissy when it comes to this so take it with a grain of salt. I know there are people that can not stand noise at any price. If you are old enough to remember it is very similar to the effect the old Dolby noise reduction would have on our cassette tapes. I would never buy this unit again and I honestly do not know what makes me keep it around. It does what it is billed to do but not the way that satisfies me. From what I see from other sources this has always been a love it or hate it unit. Definitly something that needs to be tried before its bought and of course there sre other ways around at least limiting the hum from a noisy axe and although they all require some effort I feel that effort is more than worth it.
Did you find this review helpful?yesno
»

badgerific's review"Okay to stop hum, not great for other noise."

Electro-Harmonix Hum Debugger
3
Simple to use stompbox format, just plug your guitar cable into the input and your amp cable on the output (1/4") and plug the power supply that comes with it and you're ready to go. The only controls that this pedal has is a toggle switch for normal/strong hum and the bypass footswitch. It's true bypass so that when the effect isn't engaged it doesn't effect the sound of your signal at all.

Very easy to use, this is a pedal which I had on all the time when I had it and the only thing that needs to be adjusted is the normal/strong toggle switch depending on the amount of noise in your signal chain. Can't get much easier to use than this pedal.

I think this simplicity could possibly mean that it's more limited than other noise suppressors/gates.

I used this pedal with various basses and guitars and while it did cut hum from my signal it also added a strange sound which I can only think to describe as a subtle ring modulation kind of sound. I thought it was just my pedal or something else in my rig but apperently other people have reported the same problem so that may be something to consider when buying this pedal. It's because of this ring modulation sound that I tradded this pedal and won't be getting another.

I dislike the wierd ring modulation sound this pedal made and it's quite a large pedal so I couldn't justify keeping it. I think there are other noise suppressing devices that would be a better choice such as an ISP Noise Decimator. If the strange noise wasn't present on this pedal then I'm sure I would still have it today.

The thing I did like about this pedal is how simple it was to use even if it means it's slightly more limited.
Did you find this review helpful?yesno
»

Jazzstang's review (This content has been automatically translated from French)

Electro-Harmonix Hum Debugger
What are the effects or types of effects available? What technology is used? (Analog, digital, tube ...) Are they edited? Via a Mac editor / PC? What is the connection? (Audio / MIDI) Is this a rack or rack-mount model? *dropoff Window

I receive it soon, I'd do a test pronto!

Is the general configuration is simple? Publishing of sound effects or is it easy? Is the manual clear and sufficient? ... *dropoff Window

Are the effects effective, responsive and realistic enough? What instruments do you use? Which ones do you prefer, you hate? *dropoff Window

How long have you use it? What thing do you like most and least? Have you tried many other models before buying it? How would you rate the quality / price? With experience, you do again this choice? ... *dropoff Window
Did you find this review helpful?yesno
»

knobknobknob's review (This content has been automatically translated from French)

Electro-Harmonix Hum Debugger
3
suppression buuzz microphones guitars
a switch to select normal and strong level of intervention effect
is the analogue
an input and an output jack 6.35
7.5 volt power supply by transformer supplied
it's tough, it's ehx! Brushed metal shell, you can jump on it without problem (well after that I weighed 60kg ...)

for use is simple:
a switch to turn on the classic effect
2-position mini switch to select the degree of suppression of buzz.
we would have preferred a knob qd same story can be determined, there is a little or nothing ...
Manual no help I did not read I do not even know if there is one elsewhere ..

this is where things get complicated!
I bought this pedal because I play only on single coil guitars (Telecaster, Jazzmaster, Danelectro) and always with a big crunch or even a good fat hi gain distortion pr tv.
I say eureka! finished the infernal buzz microphones in repeats and saturated sounds I would win in clarity!
let's be clear: this pedal is not made for that. Let me explain:
with a big crunch, the "normal" still happening, it in effect removes the buzz, but there are residues of a signal quite nasty. if I pass in "strong" that is supposed to completely eliminate the buzz that is going bad. The buzz disappears indeed but the sound is distorted. A small but very very very very unpleasant reverb occurs (such as "I play in my toilets tiled from top to bottom). So there is not great, it's very Legernes, but leaves no longer have that buzz, both maintain a clean signal.
Saturated mode (distortion, overdrive fuzz, any pedal or amplifier channel with gain at least half> I did the tests) is the catalytic bin there (in "normal" as in "strong "). The reverb is not very light but actually completely there. That said it could be interesting because the reverb is ultra short, it sounds a bit like a ring modulator, some perhaps its stride but it must be noted that this is not what is asked.
In fact it does not work very well with clean sounds or light crunch. And suddenly it's practical to record guitars with the mic stuck to HP and have a clean track from beginning to end of the socket.

Ultimately I was very disappointed by this announcement as a "miracle product" and the EHX brand, which I love and I have a dozen effects that have always filled. I thought he did not care a bit about us over here.
I put 5 / 10 because it makes qd even half of the job and can not deny the quality of the material stuff is pretty solid.
A little boring as the transformer in 7.5, which adds a power supply on the pedal board (for those like me who lugs around a swarm of pedals ...) and does not connect it via a string like the others. And it is increasingly recurrent in EHX.
I advise qd even those who play with sounds cleans or those seeking sounds a bit strange (but for the price> 110 eur new! As a good buy or a good reverb ring modulator!). Value for money just so abused.
I bought used in August 2009 and I sold it, for the fans.
I do not have that choice referrer. the limited opportunities for a pittance to use it on record for cleans sounds ...
Did you find this review helpful?yesno
»
Read the 6 user reviews on the Electro-Harmonix Hum Debugger »

Other Electro-Harmonix noise Gates for Guitar