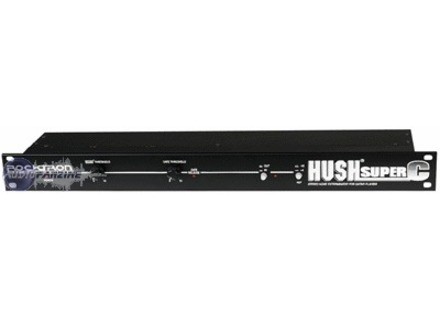 dannyz_280's review (This content has been automatically translated from French)

Infantile
you set the threshold and the gate and go!
Quick Manual

Used to reduce the breath due to my config pedal
initially:
Calibrate, clean / distortion on the amp
Plug the hush in the effects loop
-Gate and set the threshold so as to have a blast minimal (see no breath)
Switch-light / saturation and differing pickups of the guitar to check if a sound with less gain the gate does not turn into action (hence the pumping effect)
Compare the signal-to see if you do not lose momentum (in bypassing the hush)

and you'll end up with a buz and without his breath.

I use it for a year
what I love: totally neutral treatment, the possibility to use it sound (stereo)
what I like least: the large transformer heavier than the hush in itself that walk in the rack ...

I tried the little gate behringer pedal ... the fun side to this machine ....
I also tried the pedal that is just a HUSH noise reduction and, not really a gate.

a little expensive for just reduce the breath but the product is of a certain quality and then do it again yes I did!

Following several years of use on different amp heads the only drawback that I found over time is a pumping effect when on clear sound. All the heads are not necessarily two separate effects loops and bypass switch with hush and thus bypass the full song can become quite problematic ...