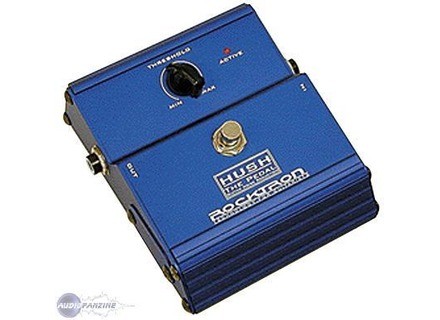 Hush The Pedal, Noise Gate for Guitar from Rocktron in the Classic series.

Rocktron Hush The Pedal
See below

Essay on guitar and amp sound.

I bought it to eliminate rumble made by my former prampli "mesa correct recording" in modern fashion. It was very effective!
Now I use the noise gate of my boss gt-8, so I have increasingly utility but I tried my jmp-1 produces a background noise OD2 mode and it is indeed also.
I also tried my PA to eliminate the feedback not provoked vocal mics (one channel of course) and it is very effective!
big default of this pedal is that it is mono.
Did you find this review helpful?yesno
»

ravnfrost's review (This content has been automatically translated from French)"Breathtaking"

Rocktron Hush The Pedal
5
It is a noise gate, said intelligent, which is fun because there is nothing more simple ...
I have the old version, the one called Hush The Pedal II as its name indicates is not earlier than the Hush The Pedal ... I think, however, that II is the fact that there are two channels, which is super practical use!

this is the pure analog juice. She was already OCCAZ, I do not know his real age (at the same time I never watched the serial number ...)

otherwise, there is an entrance, exit, of course jack, two red LED and a jack for the AC adapter. The big classic. It is rather nice, despite his age, a kind of blue anodized, this trend was still in the 90&#39;s!

config is very simple, you plug it dose, plays!
I put it live for 11 years, I only recently tested the effects loop ...
the behavior has nothing to do, but in both cases it works!

The effectiveness of the effect depends on dosage, not much give few results, and much, gives too. However even when you measure out slightly, it is already changing the sound by adding some treble (as a present) I tjs appreciated.

With many levels you have some kind of buffering effect, as a difficulty of your signal to cross the threshold you set, allowing to do as volume effects, its just far to burst through on. The way you attack the strings is a parameter. I attack strong enough, so I&#39;m tjs above. But when I go to a friend softer with sleeves (no double meaning I can assure you!), It may take the foot in the door (still no pun intended) and too much hassle to ring all correctly .

In fact, I have no signal when I live, there is a little loop effect, and there power amp will play.

I usually use only. So what use you say? in fact I think it cleans out the sound of guitars and improves rendering signal. My guitars of former allegiance (LP BFG Gibson and George Lynch Strat LTD) become cleaner, more modern in the way they sound. Typed those modern / metal (ESP KH2 and Ibanez VBT) sound more "tight"!

In any case, he eats most small noises spring electronic parasite or even treble strings that have been mismanaged

this is quite significant, but it should be used!

In fact, I use it more to change my sound rather than to clean a chain effect eg. It gives a little aside his "studio", or pro, all that there is almost zero breath as the strings are locked (still just noise transformer).

It is regrettable that his coloring, but that&#39;s what I wanted. On the other hand loses some low end (as I said it tightens and adds a small bright side / presence makes it more modern, clean example, my BFG, with its original Burstbucker out sound very "rock / modern metal "on my Rockerverb, whereas without it sounds more classic rock ...

I should also say that, having for the first time in recent months tried in effects loop, I received the report (previously I do not see the point). On the Rockerverb and a modern skyscraper, I lose a little roughness of Orange, the sound becomes duller and more parallel metal (without further saturate). With a guitar rock, it&#39;s just a dull coat, but no obvious difference. On my 5150 combo, I can not seem to stabilize the signal, it me "hush" to each attack (perhaps this is the circuit of the loop kidding ... or the difference between the loop and lamp RKVB it ...).

I still do not know how I got the idea to buy, I went to Lille in a store, and I came back a few days later to buy it. At the time, late 1990, to 17/18 years, in short when I started the guitar, I was quite impressed with the rack effects very "pro", and I was drooling before Gainiac and Rocktron Velocity 120 ( as well as the ADA MP1 and JMP1 Marshall), I think he liked me to acquire a "trick" Rocktron, and I also think I had seen in magazines "catalogs" on the gear .. . hey it&#39;s a favorite, or what ... lightning

I never tested anything else, I&#39;m really happy tjs, it still works perfectly ... So in fact, for me it&#39;s a great value for money, it is one of the elements of my material that has withstood major sales campaigns! thousand times I would do this choice!

heavymetal84's review (This content has been automatically translated from French)

Rocktron Hush The Pedal
4
What are the effects, or types of effects available? Noise gate

What technology is used? analog

Are they edited? not

What is the connection? Audio

The general configuration is it simple?
is simple an In, Out, and a knob to adjust the power of the noise gate

Editing sounds and effects is it easy?
Dity as to dessu there is nothing simpler! just one knob to turn


The manual is clear and sufficient? no need for manual

The effects are they effective, appropriate and realistic enough? then it is true that connected in series between my guitar and amp it worked well but I always have a blast! it must be that I plug the loop .. because its nickel is clean! no parasites


Which instruments do you use? between my Cort, my things and my head Marshall Valvestate

The +: ease! not need to have done mathsup!
the - is the effect in itself but it may be me who do not put where it is necessary in my chain of effects ..

Have you tried many other models before buying it? No, this is my first Noise gate

Rocktron Hush The Pedal
1
Pedals for noise suppressor based on the technology that goes Hush, shot VIR (Variable Integrated Release) blablabla that automatically adjusts its action on the decay (arfff roughly understand it happens on its own when the sound s'arrte giving way to the background noise not nice, and it is the attack that the Hush). Finally, the paper ...

In one, an Out, a 9v jack, an on / off switch, a diode, a knob of threshold
Bte like cabbage.
A plug in a distortion or a derrire pramp (in my case, it is in the effects loop of my Powerball before my delay).

B'en logically has to RULES ear, leaving his scratching and turning the knob up to what the hum disappears. Ultra simple.

B'en is the drama. Totally ineffective. This is confusing.
My Powerball is a gate rather violent on both channels lead (trs violent but ultimately effective!). I wanted to make the subtle hush me slamming this (with the reputable Hush has the rack, I've really thought).
B'en nan. To believe that my PDAL is dead. Frankly, it is replaced by a discrtement Royal slice of pizza with pepperoni supplment, it would mprendre it, question its effectiveness on ...
Ha, if she eats a little momentum is ...

B'en here I opt for the gate of my Intgr Powerball and also to a ISP Decimator (https://fr.audiofanzine.com/produits/avis/index% 2Cidproduit 2C55377.html%).
In short, flipflaps trash ... 90 euros in the bone. Incredible ... and appalling.

Did you find this review helpful?yesno
»
Read the 10 user reviews on the Rocktron Hush The Pedal »

See all 127 photos of Rocktron Hush The Pedal »