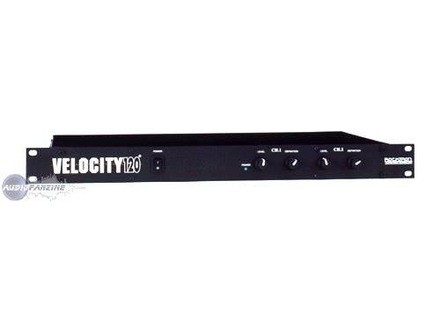 Countdown's review (This content has been automatically translated from French)" Really good!"

Rocktron Velocity 120
5
Power amplifier (PowerAmp) to transisitors.
1U, 23 cm deep weighing about 4kg.
Its power is 120w in bridged mono or 60w per channel in stereo.
4 knobs on the front ... a level and a channel definition. The definition is a kind of "contour" which is very effective.
At the rear, an input and two outputs per channel, and a small switch for mono or stereo! (See photo in "medium" if interested).
Note that it is an absolute silence ... but I'm just confirming what has already been said! Nevertheless, it is important to play at home at low volume, for example ... (where my Brunetti Rockit was unbearable!)

The sound is downright good.
No staining of the preamp connected upstream.
Be careful anyway because the power is there. A previous opinion has been well said that it is usable in all situations!

I use it with my trusty JMP1.
I play pretty hard and heavy (mostly distortion, so) and the sound is right, proper, balanced. Full bodied and dynamic ... It really boosts the preamp. All that was plugged into it grew nickel (Piranha, E530, RockMaster)
It is connected in two stereo 2x12 (in a V30 and the other in Eminence).
In clean, it is also. The effects are well rendered, especially the chorus that I use almost constantly on this channel. Really clean.

I own this amp for a little over 2 years. I bought it to amplify a Marshall JMP1 acquired at the same time ... and all the two are still in their rack at home (a really good team!). This is my amp a little extra to play with me!
I love the knobs "definition" that allow or not to dig the sound, which is not bad in stereo with 2 identical cabs with different HP!
There is nothing I dislike.
I tried a Marshall VS8008 and Brunetti Rockit and Velocity has nothing to envy them. Well, I did not play big PowerAmp all tubes, it's true, but for less than 150 euros ... it does not exist eh?!

The value for money is phenomenal! When I think after you buy it, many parties Cygnus 30 or 40 euros less ... but hey, it does not matter, this is the one I wanted!

I will not delay to offer me a 2U lamps but I would keep my Velocity!

Simple setup.
The big sound comes Desuite have already provided his own sound. He will take care of you amplify it all beautifully.

I play metal, type Pantera, Soilwork, In Flames, and coupled with my Sansamp PSA-1, it keeps the color of the whole.
I get a sound very "tense", square and very clean.
I play Ibanez 6, 7 and 8 strings.

I use it since I started riding my rack, or a few years!

In a config like mine, it plays its role, and deliver enough power for rehearsals and concerts.
Good value for money.
But be careful that you observe the impedance, it has a security system that literally cuts the amp to avoid damaging the rest of the system, if they send too much power. (Middle when it happens in full concert, just enough to know what one branch, to whom, what and how).

nemesia3's review (This content has been automatically translated from French)

Branch is super simple, automatic choice of the impedance ...

It amplifies what we give him faithfully.
power is quite sufficient in all cases

Bought used 10 years that I use about 4 hours per week repeating and concert, with preamp phirana, multi-fx Lexicon MPX G2 in cabinet ENG 2 * 12 Vintage 30 mono 95 watts into 16 ohms.

If you want to listen to the result: http://www.myspace.com/indigo31

Amp very little heavy, indestructible, super stuff.
I had the pevey 50/50, 50/50 both the mesa all lamps and the difference is really not great, just be a little less lime than pevey ... but nothing significant to me.
need to change the lamps and at least 10 pounds in less than a transport of happiness!
I play blues, rock seventies fits me very well ...

Rocktron Velocity 120
5
Transistor power amplifier meets the very grain of the preamp. We're not going back into the comparison tube amp and transistors, although it takes is this one compared to some brands more prestigious.
amp stereo, mono bridgable, 2 inputs, 4 outputs
in 4ohms 2 * 60 watts in stereo
into 8ohms 2 * 50 watts in stereo, 120 watts mono
16ohms in 2 * 30 watts in stereo, 95 watts in mono

Manuel not need super simple one arm, automatic choice of the impedance.
No noise, no cooling fan, but by passive radiators.
Potentiometers reactance are doing their job.
The sound you plug ....!!

I think ideally suited to all styles of music, at least for me, no pb ...
Do not color the sound of your amp. Well if you got a crap before you'll have sound crap ...
Before connected to 2 speakers Mesa-Boogie 1x12. Now on 4x12 with 2 Celestion Vintage 30 and 2 cross-mounted Eminence Wizard and the fact that serious ....

Almost 6 years that I have it, bought on AudioFanzine OCCAZ and not a single worry.
Tried Marshall amp power color the sound too, head on bofff Bugera. Mesa's the fact .. but my preference is for the VHT 2X50 is the only one that really made me want to change it. Will try to find a VHT Black Beauty to see the difference with the 2X50. As soon as I can afford it I think I would take it but for now no urgency the Velocity 120 is fine with me especially that I want my priority MusicMan LUKE ...^^

Here I hope that you will understand that I am very happy. True to her that you upstream, Reliable, sturdy, no worries Issue price only to find it yet because they do not run the streets.
If I had to make the election again .... without hesitation ...

Rocktron Velocity 120 manuals and other files