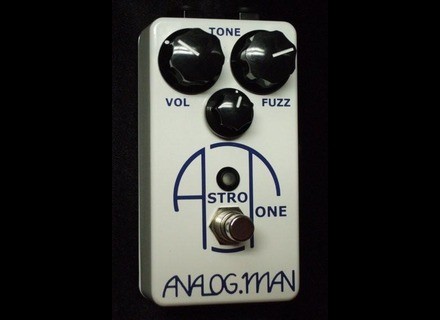 Analog Man AstroTone Fuzz
4
Analog Man makes some really cool pedals, up there with some of the best. This one is a fuzz pedal that is a bit lighter than some of the fuzz pedals I've used before. It has two 1/4" connections (in and out), and it also has a connection for a PV power adapter, it can also use a battery. This is totally analog, and as such, there are no MIDI or USB connections, and the unit is not rackable in any way.

The sound editing on this pedal is pretty easy. There's really only three knobs. Volume, tone, and Fuzz are those knobs. They each do pretty much exactly what they say. There's no need for a manual, I haven't read one, but I'm sure that you can read it easily to find what you need to know.

I like the sound of this with a Les Paul and a Telecaster the most. It definitely responds better to the Les Paul, though. I like it with my Fender Twin the best, it really rips a lot. This pedal is different because it doesn't quite annihilate the tone the way a lot of (admittedly, awesome) fuzz pedals do. In fact, when it's cranked all the way up, I don't really think it's that good. I actually prefer it with the fuzz setting on light, when it acts more as a distortion/boost. It'll pick up your rhythm tones from being slightly overdriven to being loud and rocking. It has a decent amount of variety for a fuzz pedal, one of the reasons it's good, I suppose.

While this certainly is far from my favorite fuzz pedal, I'd have to say I enjoy it quite a bit. It works really well as a boost/distortion as well as a fuzz, and it's easy to use. It has no noise, and is true-bypass, which works well for me. I'd recommend it if you find that a lot of fuzz pedals are too much for you.
Did you find this review helpful?yesno
»

Analog Man AstroTone Fuzz
5
Analogman designed the original Fuzz pedal based on the Astrotone 1970s. A study analog circuit components selected on the flap, an original case with rounded and very solid paint. Analogman proposed a time black boxes with gold lettering. This is the model I have. Fuzz works on 9 volt battery or from a 9v adapter. Nothing complicated, a button to gain another for volume, a little to the tone. The sounds are rich, I would say slightly compressed tone that really affects the sound. It has especially compared to other pedals, is that it does not saturate at the point of no longer distinguish the notes, as they may have on Benrod. So a warmer less fat saturation, and with a sharp attack.

A simple and effective use, it comes in a small canvas bag like all the pedals Analogman, and sometimes a gift as a keychain or something foam to put his beer can. The manual is in English, but very simple, no need to complicate the head. Obviously the Fuzz is used on specific songs, rhythmic or devastating solos.

It depends on the guitar and microphones, of course, but the sound is at the rendezvous. Well, I must say that Mike, the Analogman worked on this model for several months. We must also say that small business is not passed to the industrial stage, so there may be several months waiting for some models in the range. Be patient, but patience pays. Behind the Fuzz is clearly recognizable guitar.

I've had three years, nothing to say. Efficient and always ready to use. I have several other models, including a Sun Face Fuzz, a Benrod, and the sound is always different. So give it a try based on what is expected or not.
What I like is the craft side, and therefore the singular side of the pedal. For the price, this is equivalent to a good pedal shop, but sometimes add customs fees which currently are salted. (The fee is calculated on the total amount, including shipping, so it is necessary to add 40 to 50 euros.) Hence the interest to find one in France.