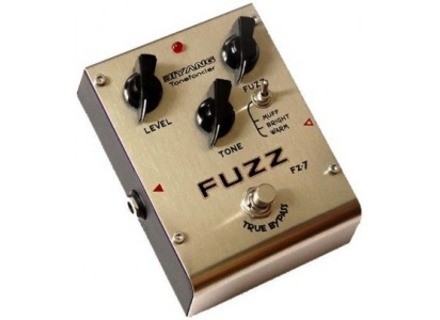 FZ-7 Fuzz, Fuzz pedal from Biyang in the Tonefancier series.

Biyang FZ-7 Fuzz
4
The Biyang FZ-7 is a multi-mode fuzz pedal that is designed for use with electric guitar. It's definitely usable with any electronic instrument, but I'd stick to using it on electric guitar unless you're really looking to experiment. This is an all analog pedal, with a standard make up in terms of connections and power requirements sine it's input and output jacks are 1/4" and it requires 9 volts of power from a power supply. The pedal has true bypass and isn't rack mountable since it's a stomp box.

The make up of the Biyang FZ-7 is generally pretty easy to follow, as most users will be able to figure out everything pretty much on the spot. The FZ-7 has three fuzz modes - muff, bright, and warm. It then also has parameters for level, tone, and fuzz, which are the basic parameters seen on most distortion and overdrive pedals. That's pretty much all that there is to the pedal, so no manual should be needed.

The Biyang FZ-7 is a pretty versatile pedal for not having too many parameters to work with. Between the three different modes it's possible to get a nice array of different fuzz sounds, but don't expect anything too radical from mode to mode. The 'muff' mode definitely sounds like an Electro-Harmonix Big Muff minus most of the noise. The other modes however are awesome as well, perhaps even more so than the muff. I would have to say that I like the warm mode the best, as it definitely adds some nice lower end warmth to your sound. I've used the pedal with a variety of different guitars and amplifier combinations...

As far as getting bang for your buck goes, the Biyang FZ-7 is at the top of it's class. The pedal is definitely better than most in this price range, although you aren't going to find too many pedals total at this price, let along one with three distinct modes. Whether you're on a budget or not however, the FZ-7 is a very useful pedal that I'd recommend checking out. Definitely an awesome and versatile fuzz pedal for players on all levels...

Biyang FZ-7 Fuzz
3
We want a nice Fuzz, we look at the brands, prices and then there BIYANG Chinese manufacturer, and many good surprise, a light breeze but disappears when playing.
sounds very honest, a switch for three different sounds. it is not bad on her.

Simple can not as often on these pedals, one branch triturated some knobs and presto! we play is perfect.

Good sound, BIYANG produces effects for other brands, just look at the box (please metal) to find exactly the same as other more expensive brands, this is what led my choice also.
Not really critical on the sound palette is quite large because of the knobs and switches, it has a good selection of sounds.

Well, it is quite some time now and always enjoy the plug is not upscale, but it does well for the price it's not worth it to miss a small little fun price it spoil anything.

very simple
was immediately a good sound, then it's matter of taste as to the dosage. I regret a little hair that setting the "Fuzz" at least not allow a finer distinction: I liked the possibility of a subtle fuzz.
three switches offer three colors. I can not really describe the difference between cold "muff" and "warm" but are a bit rounder than the brigth, which is at once sharp.
Knob The tone is effective without being transcendent fuzz anyway we do not ask him to do a headstand avecune pen to c **, it's the fuzz, lo!

The sound is at once sharp. It's enjoyable. The color is quite modern, I say a tad cold, but for the price that you ask for? it's huge!
Like I said, it was not a very fine fuzz on minimi, I've seen better, but it do. I use it with such a low accuracy and a special type JazzBass, all on 210 mag 300 ashdown evo II. I use it rarely donf setting on the bass, I find it naz, but on a guitar, it rocks kind of expensive!!
It's thick, sharp, precise it life. For the price, I believe it.

I've never been interested in the fuzz, though I ran the Big Muff EHX a bunch of times but it never told me. One day by chance I see in a shop, I test ... and considering the price and quality I am left with too dry! was there a month or two.
Bravo on this one the Chinese have made strong.
Value for money quite amazing.
Well it says I said: I have not tried many others! actually no! except one made by a French, but it climbed to 145 €. The calculation was simple.