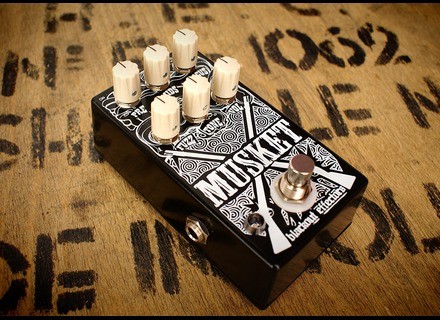 Blackout Effectors Musket Fuzz v2
5
With the original Musket fuzz Blackout Effectors redefined what a Muff could be, creating an unparalleled level of control over the tone. With the second version Blackout not only stepped up the design, but changed the direction of the Musket. While the first version was a magnificent lead pedal (Pink Floyd anyone?) the latter incarnation is much more aimed at the classic wall of sound Big Muff tone that we all know and love. And while both are superb at what they do, one should not expect one to take on the others forte as its own. This is a big sounding fuzz, think Black Keys and White Stripes, and while it can be molded and shaped to do just about anything, there is the sweet spot, a big, hairy, obnoxious sweet spot.

The beautiful thing about the Musket when put next to other muffs is the tone sculpting one can do between the "Tone" "Mids" and "Focus" knobs. The issue I always had with muffs was the way they could get lost in a mix, but this issue has never presented itself with the Musket. I prefer a heavy does of upper mid range in my tone and with the right settings I can almost always get this. The only time the tone has not been to my liking is with the neck pup on my tele, as it can lose some of it's aggression, but that's just the nature of the pickup rather than the pedal itself.

As you astute readers have probably gathered by this point, I honestly don't have much of anything negative to say about the Musket, it sounds great with every guitar it has been paired with in my experience. One must also note that due to it's tweak-ability it can be very easily manipulated to lay down thunderous bass lines ala Death From Above 1979. The only thing word of caution I must present is that it can be noisy, but this is fuzz we're talking about here people, it's not supposed to be quiet, especially not a muff.

An ultra controllable muff with a boost in front? What's not to love. Anyone muff fan, or even any true general fuzz fan, needs to try one of these out. It is my go-to distortion box, and will be for all of the foreseeable future. Don't let all the knobs scare you, it's not like trying to dial in a Fuzz Factory. Every sound is usable, but take the time to play with the controls enough and the King of Muffs will reward your efforts.

The setup is fairly simple, like editing sounds.
6 buttons to adjust the sound, in addition to the usual, volume, gain, tone, traditional big muff, it also has a midrange control, a control on the bass, and a button called "pre "(which is actually a drive / boost placed before the fuzz ... which lets you play using that David Gilmour can do is to say, the tube works in boost, and just behind the big muff)

It is particularly effective and a pedal that has a large range of sound (especially for a big muff), with buttons for "pre" and "fuzz" may range from light to drive the big fuzz that floss.
For the tone settings, between the button "tone" that can give the general color and the buttons "mids" and "focus" to refine ... impossible not to find happiness.

We can go from pink floyd, the white stripes, or the black keys, and until his big grunge type etc. ...

A very good "big muff russian" which stands out for its wide range of sounds and also a nice little detail for fans to palm mute; setting "focus", which seems to have been created for them (the knob is on " held "serious, which allows for a tighter grain or not)

Using all his buttons this pedal covers the full range of Russian big muff including civil war, the green ...