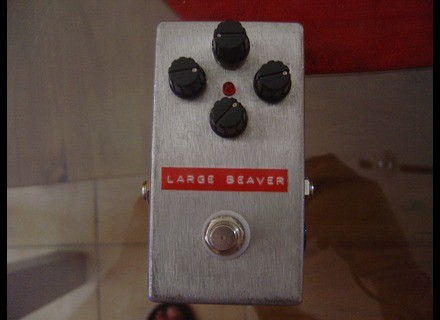 Thierry255's review (This content has been automatically translated from French)" A Big Muff but better :)"

Build Your Own Clone ram's head big muff
4
Pedal "mimicking" the old Big Muff. This one is a "reissue" of an old Big Muff, the Rams Head.
Analog, powered by 9V battery or standard.
Differences with sorting model are not huge, let's be clear. The rams head, compared to the triangle version gives a little less bass and a little more treble.

Config extremely simple, a volume, tone, saturation adjustment and a 4-way switch (normal, scoop, scoop more, tone bypass). Be careful when passing the first three positions in the 4th to the significant increase in volume!

Of course, well that one is dealing here with a Muff-like, so do not buy if you want a sound fuzz factory, this style of her Muff is quite specific (by the sound of particular medium, and a mix of distortion and fuzz so to speak).

Very effective indeed. Used with 2 guitars with humbuckers, when I active I take a kick in the behind !!

Seriously, I've always liked that sound "Muff" I was offered a Big Muff Reissue ... I played 4 hours and I sold it in stride ...
And yet it was missing its typical (but also with a fuzz factory). I was lucky to come across a secondhand not too expensive, and I do not regret having taken the plunge !!!! There is a gain monster in there

and as much pleasure that level of play that has nothing to do with the reissue (for my taste), it blows less, it's less messy, and also much more "versatile "as well: D
I used the last bit position (though very good), simply because I prefer to have my hand on my tone setting.
A clear as before I was using my OD to boost my amp distortion; now it's the muff that I use and it's perfectly his case!

Used for 1 month and a half, I tested just the reissue model, the tone wicker, the little. Not at all excited. I have not tested other models "copies" shop, so I would pronounce me not on a possible comparison with other models. Anyway, I found a joy of his "Muff"! Excellent value for money, even if purchased new, for someone who absolutely seek this sound. I was in no hurry and it is rather episodic use so I could expect to fall by chance a chance: I'm delighted, this choice I would 1000 times!

Other Build Your Own Clone fuzz pedals