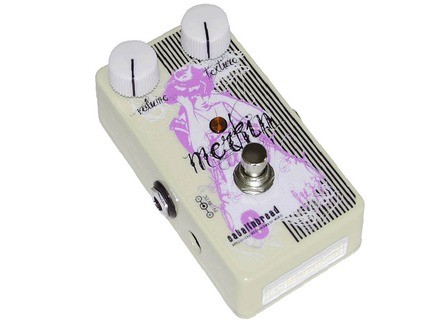 Catalinbread Merkin
4
I think non-fuzz enthusiasts something make the assumption that all fuzzes sound basically the same. And this is just not true. There are a wide range of different fuzzes and some of them don't sound very much like fuzzes at all. But probably the most sought after fuzz sound is that classic aggressive 60's buzzsaw fuzz. You know the one. Hendrix used it. Black Sabbath stole it and made it awesome-er? And surf rock bands loved it for solos. But it seems like no matter how many fuzz face clones are big muff wannabes you play, that tone keeps being elusive. The Merkin is Catalinbread's version of the classic 60's fuzz, simply put. There's not bells and whistles here. Just a fuzz knob and a volume. That's all.

I've never really had an issue with Catalinbread quality or utility. Sometimes their pedals respond differently to certain power supplies which can get boring. I eventually sold my dirty little secret for this reason.

My biggest complaint about classic fuzzes is they take the "buzzsaw" sound way to far, to the extent that the pedal loses all its dynamic response and tonality. Also, some try to do more than they should, and be "all fuzzes at once." The Merkin isn't about that. It pretty much gives you one sound, which is that whole Hendrix 60's gritty lead buzzsaw tone. It can also give the whole surf rock solo thing if you lay back on the knobs a bit and plug in a strat. And if you crank the fuzz knob you'll get into ozzy territory. It's very responsive to guitar volume, so you don't really have to play with the pedal to get a varying tone out of it.

The Merkin isn't the be all of fuzzes but it does get "that" tone in spades. I have a lot of fuzz pedals, many of them over the top. This is not one of those. It's a very aggressive, yet melodic sounding fuzz. Nicely balanced. Go listen to some clips and you'll catch my meaning.

Published on 08/13/10
The Catalinbread Merkin is a fuzz pedal designed to be "just right for classic sixties fuzz sounds and beyond" according to its manufacturer.

See all 8 photos of Catalinbread Merkin »