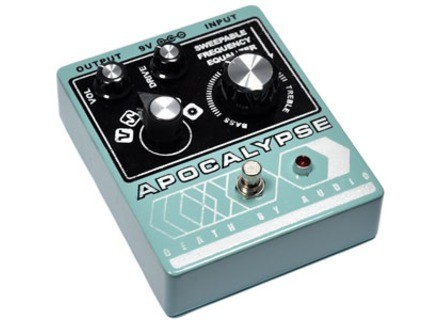 no editing, it is running

very effective, you can go to the edge, muddy, and therefore psyche quite register

I was not too much fuzz, but this one gave me the taste of use

Egalizer the button "sweepable" is a kind of parametric tone which greatly varying tone and grain, and although difficult to define to low sound darkens and lightens to treble but it is actually much more subtle than that, because by varying only a few graduations, we arrive at different balances and grains

for 2 months, not j 'was focused on this brand and hesitated on the supersonic fuzz gun & the three fuzz war overload

the first was too ds experiment too bizarre, the 2nd most focused on winning, Yannis pedal advised me that one because 5 fuzz and directly usable even when a large registry and absolumeent do not regret!

the - volume differences between fuzz

In absolute terms, a switch with 5 fuzz accessible via a foot switch that was not bad, mas as they generate different volumes, it would have still be lower and it is still quite rarely changes fuzz during the song!

R / P / Q very very good, and off the beaten track, but to arrive at the testing of anything in matters of sounds!

Yes, I do it again this choice unquestionably

See all 54 photos of Death By Audio Apocalypse »

View all 3 videos of Death By Audio Apocalypse »

Other Death By Audio fuzz pedals