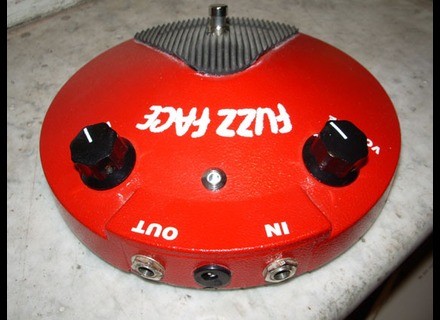 All user reviews for the Dunlop Fuzz Face

Average Score:4.7( 4.7/5 based on 4 reviews )
Buy this productView price information >
Not satisfied with those reviews?
Our members also liked:
Buy at Sweetwater

Dunlop Fuzz Face
4
Probably the most famous fuzz user out there was Jimi Hendrix. He was a long time user of fuzz pedals to help boost his Marshalls into this insane overdrive that nobody else had going on at the time. His go-to pedal was the fuzz face, and it's still one of the most iconic pedals out there today, complete with its unique shape and its unique sound. The pedal has two knobs that you adjust for the volume and gain, so it's super simple to set up as well.

These things are crazy tough. I've had all kinds of different versions of these come in the shop ranging from the originals to the reissues, and they all withstood the huge amount of abuse that people run through these. The only real problem that ever occurs on these is that the switch will die after decades of hard abuse. Besides some stupid user error things (people plugging in the wrong adapter), there's not much to go wrong with these things. The knobs are laid out well enough to where you can easily see them and get to them. However, I'm not a huge fan of the shape, but I tend to prefer the smallest pedals you can possibly get.

The fuzz sounds great if you're looking for that old school, classic Hendrix fuzz. Anybody who has ever heard Hendrix's tone has heard this thing in use, and it's one of the most stand out sounds out there. It's not the most versatile fuzz out there. It only has two knobs, and its range is limited. It's also not exactly the most organic fuzz out there. I'd give that to the old school big muffs. However, for the fuzz sound that it delivers, I honestly believe nothing out there can really come close. It's a very solid sounding fuzz that delivers tone for days.

If you want that Hendrix sound, this is the pedal you want to get. It's organic sounding, has some good range on the knobs and can deliver a very solid fuzz that other pedals seem to forget. Today's pedals go for all kinds of crazy and wacky features, but they forget that some people are just looking for a classic fuzz. If you're one of those people, this is for you.

Dunlop Fuzz Face
5
I really like this fuzz pedal a lot, as it is very reminiscent of the late 60s fuzz that players like Clapton and Hendrix would use. In fact, my buddy who let me use it for a couple months said that it was a direct replica of the Dallas pedal that Jimi Hendrix famously used during his time in the Experience. There are only the 1/4" input and output, as well as the input for the power supply. There is no real MIDI or computer capability and the pedal is not rackable. It is an analog pedal.

The editing of this effect could not be much simpler, it's very old-school in its two-knob (volume and fuzz) approach. There really isn't much need for a manual because of how simple it is. If you want to adjust the circuits, chances are you won't need a manual anyway.

I like using this with my Les Paul or Fender Strat along with a Fender Deluxe '65 reissue or a Fender Twin. There isn't much that's crazy original about this pedal, but it is really reliable for this reason. It can go from a lighter, Clapton "White Room" fuzz to a thicker, Hendrix-style "Voodoo Child (Slight Return)" fuzz. It isn't one of the more drastic fuzz pedals out there, it isn't as intense as a Big Muff or a Fuzz Factory, it's more of a lighter fuzz. But I still really like it a lot.

I think that for people looking for a classic 60s pedal that can add a light touch or still kick some butt, this is a great choice. The fact that it's based off of a classic is a good thing, it sure does sound classic to me. You can get them for just over 100 too, which isn't bad. I recommend at least checking this out.
Buy at Sweetwater
Did you find this review helpful?yesno

Dunlop Fuzz Face
5
The Dunlop Fuzz Face is a pedal designed for use with electric guitar.<span> </span>This is a reissue of the classic Dallas pedal that Jimi used to use.<span> </span>The pedal is pretty standard as far as its features, as its got standard ¼ inch connections for input and output and is powered by a nine volt battery.

<p class="MsoNormal">In terms of parameters, all you’ve got to work with here are knobs for volume and fuzz, and that’s all that there is to it.<span> </span>There aren’t any tone knobs or anything like that, but you can definitely get a few different types of fuzz tones with just these two parameters.<span> </span>A manual isn’t necessary since it is so easy to use on its own.

<p class="MsoNormal">The best way to describe the sound of the Dunlop Fuzz Face is that it is a straight up fuzz pedal.<span> </span>Some fuzz pedals claim to be fuzz, but most of them are just distortion sounds with a bit more muddiness.<span> </span>The Fuzz Face isn’t like these pedals at all.<span> </span>While for the most part it is very thick fuzz, it can also be used as a subtle fuzz.<span> </span>I’ve used the pedal with a Fender Strat and a ’76 Twin Reverb amp, and I feel that this pedal is perfect for this type of set up.<span> </span>In terms of sound, if you’re looking for a vintage sounding fuzz, the Fuzz Face will get the job done and then some…

Even without taking into consideration that some of the great guitarists of all time used the original Fuzz Face, all it takes is a few tries to realize what the hype is all about.<span> </span>While there are certainly tons of fuzz pedals to choose from in this price range (about $100 USD), don’t make your choice until try out the Dunlop Fuzz Face.
Buy at Sweetwater
Did you find this review helpful?yesno

Dunlop Fuzz Face
4
Fuzz.
Power and battery powered only battery feared. Will have to use the drill for passing a spot.
1 volume, 1 Gain (fuzz).

Ben there is no simple 'end if the nano muff overdrive ...
But only on battery.

Often it is the pedal with this, believing her to return Hendrix; ben is not Hendrix and it was not his original stuff so it's wrong barr!

I feel more like a BIG ultra fat and dirty overdrive / fuzz than a dark shade 100% fuzz, I play background volume knob and I gauge the gain according. With over low volume is closer to the typical fuzz but for once it sounds too bee and feeble. It is drier and a nasal big muff for example, much softer and less bumps into a fuzz war and greatly less dynamic than Zvex.

Nevertheless remains a very musical and although it is "dirty" must be precise in his game and his sound.
It may also like any fuzz pedals serve "warm up" the sound and / or granulis putting the zero gain, do with the volume and switch the amp distortion; may be trsmchant.

on the other hand it has a very organic and natural ct that I did not find my other fuzz (big muff, the vintage Russian through the bass big muff) is not dplaire. Under its action is the impression that the rope gets stuck in the button to become one.

This is a unique fuzz type, color, ractivit. Not bad current fuzz sound very well but like all too much.

After it is a very smooth fuzz, it's not sharp or loud for a pet so it's pretty nice.

What I like most is ct "overdrive" chubby on a single coil remains "clear" and dfini gnial for rhythmic, double switching from another c t and sends the classic "metal".

I got 40 secondhand and I am aware that is not expensive at all and that even when it is a little more ...

I bought it because of an I-love fuzz (I basicly gently but surely) and that the golden opportunity was Introduced to me.
I do not have to buy the new car I really find too chre for his overall record against my sound and musical tastes.
There may well have such and such components overpriced nine.

I find the price not justified; saw the new price must be tested before purchase.
Buy at Sweetwater
Did you find this review helpful?yesno
Cookies help us improve performance, enhance user experience and deliver our services. By using our services, you agree to our use of cookies. Find out more.