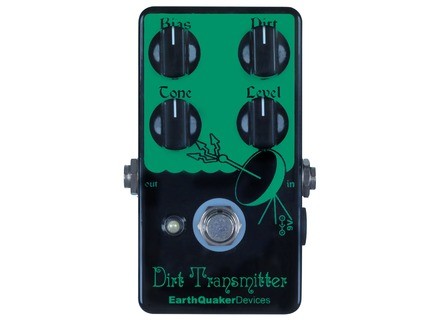 See all 5 classified ads about the EarthQuaker Devices Dirt Transmitter »

EarthQuaker Devices Dirt Transmitter
5
The EarthQuaker Devices Dirt Transmitter is a fuzz pedal suitable for all electric instruments, but designed for use with electric guitar. The pedal is an analog one, consisting of a standard make up with a 1/4" input, a 1/4" output, and options for powering it with either a nine volt battery or external power supply. It isn't rack mountable as it's a stomp box.

The configuration of the EarthQuaker Devices Dirt Transmitter is rather simple, as I was able to catch on quickly. It's got knobs for controlling bias, fuzz, level, and tone. If you've ever used any sort of distortion, fuzz, or overdrive pedal before, you'll notice that this is a fairly recognizable make up. I haven't seen the manual for this pedal, nor do I believe one is necessary.

The sound of the EarthQuaker Devices Dirt Transmitter is really cool for what it is, and what it is is a thick fuzz that's great for getting a beefy rhythm guitar part or a heavy lead sound. I would say that I like it best for a nice and fat rhythm tone, as it really gives you a wall of guitars sort of sound. I'm not sure that this is the kind of pedal I'd be using on a daily basis if I had it, but as an extra color to have as needed, it's really a great pedal. Of course there will be those out there who will be using this sort of sound all the time, and the Dirt Transmitter will certainly excel in both roles...

While I'm fairly new to pedals made by EarthQuaker Devices, the Dirt Transmitter is a great fuzz box. It's not the most versatile fuzz in the world, but you can definitely get a good amount of varying tones with the given parameters. Again, I'm not sure that this sound is something that I'd personally be using all the time, but it's definitely got a great sound and when used in the right situation will shine. If you're looking for a great fuzz box, the Dirt Transmitter is a pedal worth knowing about.

EarthQuaker Devices Dirt Transmitter
5
The Dirt Transmitter is a fuzz pedal built around transistors germaniums and Silicone. It is always the duel between the two kinds of transistors in all fuzz pedals, with some preferring the sound germanium, else its silicone. Here, not jealous!
The pedal has 4 knobs: Traditional Volume / Gain / Tone knob and a "Bias" which allows you to play on the "stability" of the effect, but I'll come back later.
An inlet, an outlet, a plug for 9V and basta.
Without revolutionizing the world of fuzz, Earthquaker Devices sign a simple, clear pedal and manufacture (casing, screen) ultra careful, consistent quality for this manufacturer. The foot is the size of a MXR therefore rather small, which is an undeniable advantage in pedalboard provided.

The usage is quite simple but it should still be noted that the item "non-operating" the bias knob, that is to say, the position where it occurs absolutely not, is located at 2:00, a Slightly more than half.

I must admit that the Dirt Transmitter is really excellent. Despite limited versatility, she does little but it does really well!
To me, his areas of expertise are the riffs and solos of "vintage" field. It's simple, I managed to get the sound of "Satisfaction" by the Stones, the sound on the David Gilmour's solo song "Time" or more sounds used by the Queen of the Stone Age for you Locate a little ... All good!
The knob "bias" adds a real trick to the pedal, to generate sounds "velcro" completely barred. Then the sound literally tears the HP when you play notes while a dead silence is heard (or not for that matter) between each note as if a noise gate was installed ... Very musical and very inspiring !

I am not versed in ultra fuzz, however I own / have owned four: Electro-Harmonix Double Muff (preserved), Death by Audio Supersonic Fuzz Gun (sold), the Fulltone Soul Bender (recovery by store) Earthquaker Devices Hoof and Fuzz (preserved).
The Dirt Transmitter is a great fuzz that I can not do without in the future. They really take a vintage dimension riffs or solos! And originality, just put the knob "bias" minimum and here I am with a velcro fuzz the most beautiful effect. A great success and a huge blow of heart!
The Dirt Transmitter does not leave my pedalboard like his sis, the Hoof Fuzz I reserve rhythmic and as a boost to single coil. The two complement each other perfectly! I would do 100 times this choice and also if I had done it before, it would have saved me buying a Supersonic Fuzz Gun and Soul Bender ...

4 knobs, pretty easy to use, there is just to understand the effects of bias on his raglage, the rest is basic, tone, level and dirt (the gain adjustment)

Very effective pedal that lets you play in many styles like the stoner, the "classic rock" etc. ...
One can easily adjust the pedal for crunch tones / fuzz, fuzz of velcro, the big fuzz greasy. Anything is possible, sounds good to acids and organic sounds hot.
The pedal works great riff by lead or to textures for planes crossed, plus it responds perfectly to the lower volumes of the guitar, which is not done to annoy me.

Very good fuzz pedal that has lots of character, great potential and is more easy to use ... to recommend