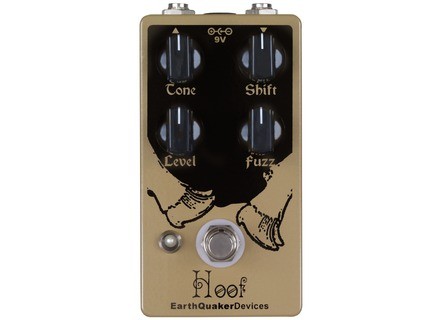 drapeau_rouge's review (This content has been automatically translated from French)

EarthQuaker Devices Hoof
5
The Hoof is a fuzz modeled on the famous Big Muff Pi Russian. It uses Germanium transistors and silicon.

Its rather small size allows it to fit easily into a pedalboard.

The pedal is well finished and exudes serious, whether outside with the screen or inside the circuit, the knobs and footswitch. A jack input, output and power plug with negative center found. The pedal uses little in the 40-50 mV which is reasonable.

The pedal has 4 knobs: Level for volume, tone to adjust the equalization Fuzz for the saturation level and Shift which excavates or boost the mids. The Shift knob is the strong point of this pedal that can go from a really good dug a big bump in the midrange. This feature allows both to adjust the sound to its gear, the desired sound but also desired to be able to stand out in the mix sometimes provided!

A brochure of the company EarthQuaker Devices this as the flagship of the brand! Surely they first offered or sold more ... I do not know ...

Even with the 4 knobs, the sound editing is simple.

Furthermore, the interaction between the knobs and Tone Shift is important. This allows for exactly the sound you had in mind ... Sky is The Limit as they say!

In the end, it really is possible to have a bunch of sounds, from a rather fat overdrive to distortion that can suit many styles to finish on metal or fuzz sounds! All in a signal / noise ratio really good.

Pedal barely breath in the most extreme settings that can appreciate the quality of manufacturing and design.

Overall, a big impression! I will complete later.

KitschMachine's review (This content has been automatically translated from French)" Creamy Baby!"

Volume: to adjust the overall output level, without affecting or "distort" the Fuzz created by the pedal.

A pair Tone / Shift.
The "Tone" works more or less like the tone knob on a guitar. The "Shift" to adjust the midrange more precisely, it is based on "Tone".

One branch, it locks the footswitch is adjusted and plays, it's easy!

The pedal recreates the sound of the Big Muff green "Sovtek".
I use it with my Variax 500 in position and soon Les Paul Guitar with SR type Les Paul also. I'm plugged into a Vox AC15 amp lamps.

The sound is pleasantly greasy and gritty, especially when the knobs "Tone" and "Shift" turned left.
The pedal has a slight fuzz when it is triggered, like a strong overdrive, even if the fuzz knob is turned down. The more you turn the magic button, the fuzz is more powerful and vibrant!
The sound palette is wide. You can easily spend a good heavy fuzz and inflated to a "tighter" and rich midrange, close to the classic fuzz distortion.

The volume knob adjusts the level without altering the fuzz effect. This helps address the preamp correctly and have more flexibility in settings to avoid having such a difference in level when switching the effect or, conversely, to have a reserve at power gain of the pedal.

The sound is pleasantly fat and creamy, recalling the fuzz effect used by Stipes White or Black Keys.
Sustain it brings is monstrous!

However, it is less oily than other pedals I've tried hair, delivers a bit more midrange and thus allows for a little more out of the mix.

I use it for three weeks and I am delighted.

Originally, I was looking for a cheap pedal to get closer to the sound era Mick Ronson and David Bowie "The Rise And Fall Of Ziggy Stardust And The Spiders From Mars" (Tonebender MK1) or Sripes White, Black Keys ... but I wanted to still be able to have a more modern and less typical sound.

I tried a few other pedals like the traditional Big Muff Electroharmonix, The Triangle Muff MOOER, The Germanium OD of Electroharmonix the ProCoRat ... but without conviction.

Then I tried the little golden box store and I literally hooked! It was out of my budget but I do not regret having paid the price in a pedal that I waited a long time and that brings me satisfaction.

The only semi-flat that I could to make my choice is that I have since discovered other pedals brand and the "Dirt Transmission" could be more dirty and creamy yet, where Hoof is more rich medium. But this is the other side a large advantage to highlight the group or highlight solis. (And only a matter of personal taste and not of the high quality of this pedal).

The real downside is its price on the other hand. Around € 200, it's expensive. It was definitely worth it, but ...

nb: it is the recent version with four buttons and not the former, which contained only 3 buttons

The pedal has 4 knobs (volume, gain, tone and a shift).
It is fairly easy to carve sounds tailor the shift knob is a valuable addition to that tone to control the colors of the pedal.

It is a very versatile fuzz, with a nice headroom and clarity.
Basically a great big muff with quite serious, nice mids and a good bite that can "get out" of the mix.
His favorite is the big sound, but it can also be quieter sounds (especially if you lower the volume on the guitar, we have a clean that dirty just right).
Very effective with humbuckers on big riffs, it is also good with single coils on small leads and small plans crunch.
Thanks to the tone and shift knobs you can go a very serious fuzz (almost lo-fi) at a very acute fuzz with a lot of grain and sharpness.

I've had little time, but I'm very satisfied, I am a big fan of pedals "big muff", and it is a good complement to those I have already, it is clearly part of Best fuzz.
Certainly one of the most versatile family of muffs, it is a very good deal.