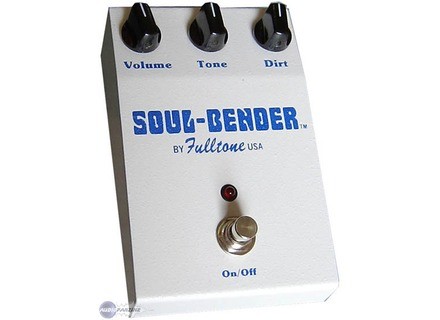 View all offers for Fulltone Soul-Bender »

Volume provides cash fuzz sound very powerful.
Tone is particularly ractif, has never seen before, at least on a simple pedal effect!
Dirt allows, as its name suggests to smear the sound by bringing even more saturation also very effective!

The sounds are excellent.
Pedal very powerful, if married my wonderful well Hiwatt Custom 100!
It's the sound fuzz by definition, rich and prcis.
After you have to love it is not an OD What we know why we take a fuzz !!
The signal is perfectly respect the pedal responds very well to the volume of the guitar, saying nothing is the best!

I flash on and m'tais jur choosing this fuzz, unfortunately it is no longer manufactured today (shortage germanium transistors) so I found OCCAZ in state new vintage finish cream with cream knobs also, she is awesome !!!
It's the Fuzz, which put everybody agrees, buy!
Did you find this review helpful?yesno
»

Serial riffer's review (This content has been automatically translated from French)

It is a very versatile fuzz, the settings are quite thin while being quite drastic ... super intuitive while being hyper-reactive.

It should be pointed out already that can be calibrated from the race of the volume knob ntérieur. This allows a preset standard curve similar to most pedals that are commonly found on the market, but you can also put the knob at the bottom and there soulbender will behave like fuzz on the eve of the 70's, with a contribution of db significant that we should not abuse it.

The filter is quite formidable low-cut/hi-cut is not really Scult a lot of sounds and especially adapted to the fuzz guitar and ampliq ue is used.

The dirt is already setting effective when it is 0 .... I who used to play with the drives at around 7 or 8, and well here I push at the most 4 and is already widely enough. Its thick, clean, and very nice low-mid, treble singing, sustain, feedback with a background within reason.

The manual holding a sheet a4 explains most but nothing too difficult to understand.

The fuzz is amazing, it gives a really great ... its coated with a les paul in a Soldano Hot Rod, I sound between the old Led Zeppelin and sounds more "modern / vintage" to the Black Crowes or view outright stoner sounds more if we push in the hi-cut.

I tend not to push the low-cut, that is, I really like the bass pedal that gives, and cut, it removes a lot of charm.

I use it for 2 weeks and has already built my game Another aspect of this pedal, and the manner to which she responds by lower volumes on the guitar, you really palette of his hand.
I had a lot of distos, I tried a lot of fuzz but this is totally the best pedal I was under the foot!

The value for money component is justified by a step up from what is commonly found on the market should also be noted that the soulbender does not currently manufactures more than the fact of a lack of component .. . I have a little hassle to find the OCCAZ ... but it's worth snapping a little more than what we usually offer, yes.

See all 40 photos of Fulltone Soul-Bender »